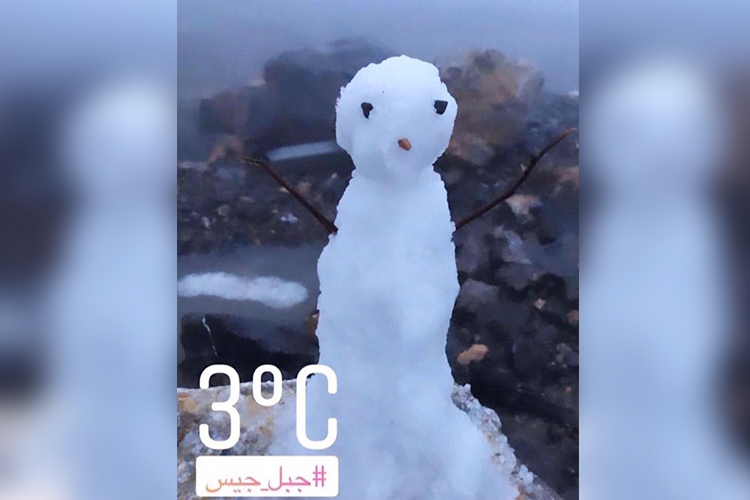 A social media user shared a picture of a snowman from the Jais Mountain in Ras Al Khaimah.

Hailstorm, accompanied by heavy showers, swept several areas of the UAE on Sunday, bringing in freezing temperatures in the mountainous areas. Sharjah residents were seen collecting hailstones after the Emirate experienced a hailstorm. Streaks of lightning blazed across UAE skies, including the Sharjah’s Buhairah Corniche, where traffic was thin on Sunday.

The rain continued lashing most of the country for the fourth consecutive day, as a result of the country being affected by instability in the weather system, which started from Thursday. Among the most significant effects of weather fluctuations is the noticeable drop in temperatures, as the lowest was reached 1.3ºC at 6:15 am at Jebel Jais.

Jebel Jais peak, which is 1,950m above the sea level, was blanketed with hailstones on Sunday morning, according to various sources, as temperatures drops to nearly zero. Social media users shared videos and photographs of enjoying the snow and making snowman.

The mountain’s peak turned white, as well as other areas such as Al Rems, Khett, Seih Al Burairat and Wadi Quda’ah. 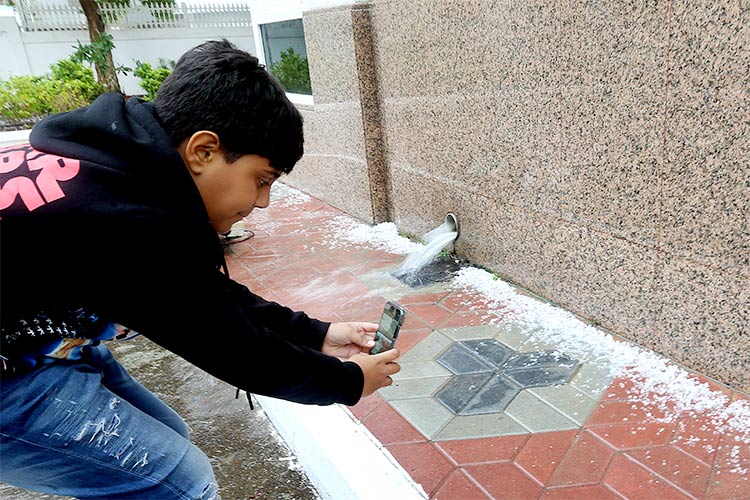 A boy takes photographs of hailstones at the premises of an office in Sharjah on Sunday. Kamal Kassim/ Gulf Today

Hailstones with heavy rain fell on Al Tuwyyen in Fujairah, Al Barsha in Dubai, and medium to heavy on Abu Dhabi.

The NCM called on individuals to be cautious while driving during the rain, as visibility is affected, urging them to stay away from places where water accumulates and the surface runoffs.

The NCM has also said that the weather on Monday would be fair to partly cloudy. The weather body said some coastal and eastern areas could see a probability of some light rainfall during the daytime.

Fresh northwesterly to southwesterly winds will be witnessed during the morning over the sea, becoming moderate by afternoon, with a speed of 20–30, reaching 45km/hr.

The sea will be rough. It will become moderate by afternoon in the Arabian Gulf.

The winds will be moderate to fresh southeasterly to northeasterly, becoming northwesterly over the sea westward with a speed of20–30, reaching 55km/hr, according to the NCM.

The sea would be rough in the Arabian Gulf in the Sea of Oman. On Thursday, the weather is expected to be fair to partly cloudy in general.

On the other hand, the Command and Control Centre at the General Operations Department of Dubai Police confirmed that the number of traffic accidents recorded during the past 24 hours in the emirate reached 303, including eight serious accidents.

The rescue team of Al Ain water bodies affiliating to the Emergency and Public Safety Directorate at Abu Dhabi Police succeeded in rescuing a number of people who were stranded in valleys and water bodies in cooperation with strategic partners, including Al Ain Municipality, Al Ain Distribution Company and the Civil Defense.

The team rescued 17 people trapped in rain water in Wadi Sa`a, other 8 in Wadi Ghashaba and 7 in Wadi Muqam, alongside 25 vehicles in the bike track in Al-Bateen. The rescued peopled are in good condition as they reportedly attuned to those areas to enjoy the rainy weather.

The rescue team of the water bodies quickly responded to three separate reports received on Sunday about people stranded in Wadi Sa`a. They then transpored them to safe places and provided them with the necessary medical care. The team reportedly carried out 93 different emergency missions during these circumstances caused by weat5her fluctuations.

Abu Dhabi Police called on citizens and residents to stay away from valleys and places, where rainwater is accumulated and adhere to safety instructions and guidelines as a result of continued weather fluctuations. The police also warned the public to avoid approaching electrical installations, and open spaces near trees during the rain.