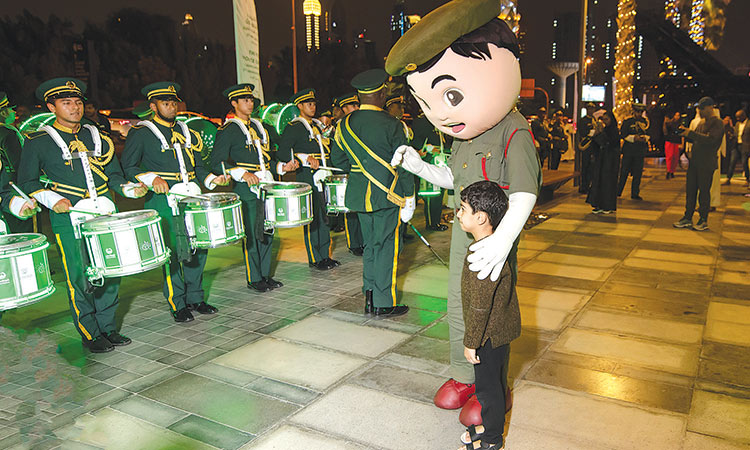 The activities of the first police carnival have been organised by the Dubai Police Academy.

Major General Abdullah Khalifa Al Marri, Commander in Chief of Dubai Police, on Thursday, witnessed the launch of the activities of the first police carnival in the City Walk area, in the presence of Major General Dr. Muhammad Ahmed Bin Fahd, Assistant Commander in Chief for Academic Affairs and Training, and Major General expert Khalil Ibrahim Al-Mansoori, Assistant Commander-in-Chief for Criminal Investigation Affairs, a number of directors of public departments and police stations and their deputies, and officers and individuals from Dubai Police.

The activities of the first police carnival, organised by the Dubai Police Academy, coincide with the activities accompanying the graduation ceremony for the graduate students and the twenty-seventh batch of the nominated students, amid an interactive atmosphere that brought happiness and joy to the hearts of the participants.

Major General Abdullah Khalifa Al Marri said, “The organisation of the” first police carnival “supports the strategic direction of Dubai Police” the happiness of society “, which in turn coincides with the government trend to make Dubai the world’s happiest city globally. It contains events and exhibitions throughout the whole week to spread positivity, motivate and employ creativity and innovation to delight society.

He added, “The Carnival activities are the culmination of the continuous efforts of the Dubai Police work teams to organise recreational, and educational activities that benefit the community and enhance the happiness of individuals and reflect the spirit of giving, brotherhood, affection, respect and positivity.”

The activities of the first police carnival, which lasts until the 15th of this month daily from four o’clock in the evening until eleven p.m., witnessed a series of interactive activities divided into two main sections: “exhibitions” and “events”.

As for the “Events” section, it included horse shows, military shows, bands, and bike shows, as well as protection schools, classic cars and bicycles, as well as an electronic games area, instant shooting, and a group of fun games such as the “catch the flag” competition set in the Hub Zero (Hub Zero).

The Dubai Police Scholars Council organised the “Interactive Crime Scene Game” initiative aimed at enabling community members to participate intellectually in solving crime puzzles that were prepared by a specialized police team, as part of the activities accompanying the graduation ceremony for graduate students and the twenty-seventh batch of students nominated in Dubai Police Academy in the City Walk area.

Major Dr. Rashid Hamdan Al Ghaferi, Chairman of the Dubai Police Scholars Council, emphasised that the “Interactive Crime Scene Game” initiative is a game that includes a puzzle for a specific crime. Participants must work on deciphering it and solving it to reach the identity of the perpetrator as well as the crime tool, by collecting evidence in the theater the game.

He added that the game achieves the entertainment aspect because it constitutes a challenge for the participants to go through the experience and use their skills in research and analysis on the causes of crimes, in addition to developing a love for police work in terms of research, investigation, criminal investigation and providing evidence to serve justice to them, which leads them to encourage them to study rare scientific disciplines that serve the field policeman.

The Sharjah Executive Council announced on Sunday that it will extend the suspension of all social and sporting events and celebrations in wedding halls, event halls, hotels, and government and community facilities, until the end of April.