Plane with 98 on board crashes in Kazakhstan - GulfToday

Plane with 98 on board crashes in Kazakhstan 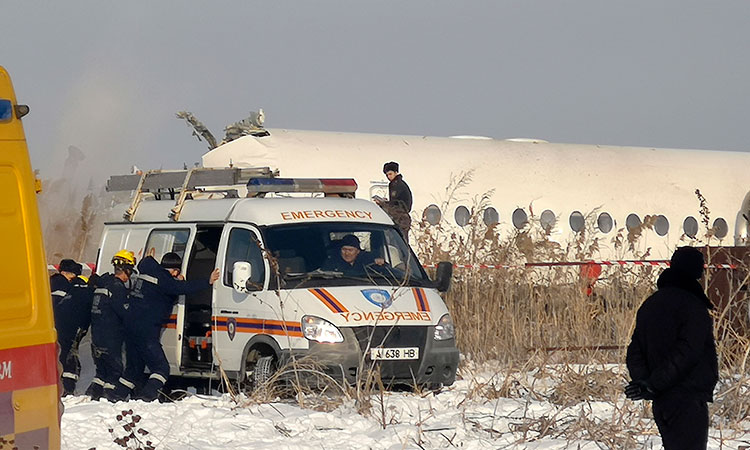 Rescuers work on the side of a plane crashed near Almaty International Airport, in Almaty, Kazakhstan, on Friday. AP

A passenger plane carrying nearly 100 people crashed soon after take-off near the city of Almaty in Kazakhstan on Friday, slamming into a house in an accident that killed 12 people and injured dozens.

The Fokker 100 aircraft, operated by Bek Air, got into trouble shortly after departing from Almaty, the Central Asian country's commercial centre, on a pre-dawn flight to the capital Nur-Sultan.

It lost altitude during take-off and broke through a concrete fence before hitting the two-storey building, Kazakhstan's Civil Aviation Committee said. It was not immediately clear what caused the crash.

"The plane tilted to the left, then to the right, then it started shaking while still trying to gain altitude," businessman Aslan Nazaraliyev, who survived the crash, told Reuters.

"Before crashing, the aircraft touched the runway with its tail twice, the gear was retracted," Deputy Prime Minister Roman Sklyar told reporters.

"A commission... will establish whether this was pilot error or technical issues. The runway was in an ideal condition."

A Reuters reporter saw the battered remains of the front of the plane and other separate parts of the fuselage scattered around what was left of the house. 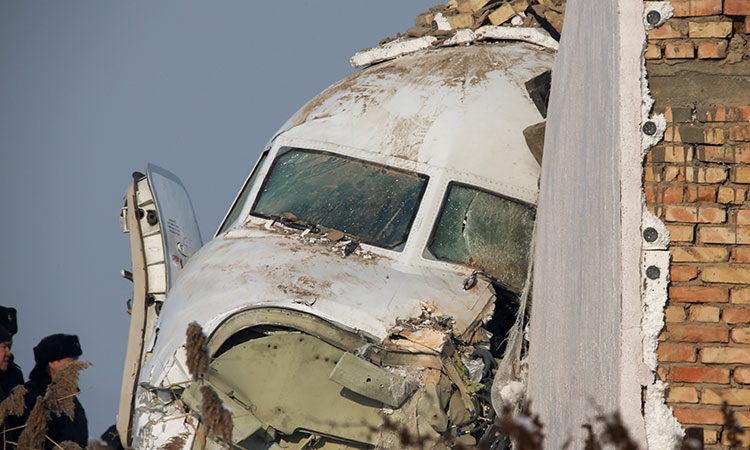 Emergency and security personnel are seen at the site of the plane crash near Almaty, Kazakhstan. Pavel Mikheyev/Reuters

"The plane was flying at a tilt. Everything was like in a movie: screaming, shouting, people crying," she said.

Almaty healthcare authorities initially put the death toll from the crash at 15 or more but later revised the figure down to 12. They said 49 people were in hospitals, some of them in a serious condition.

The plane had been carrying 93 passengers and five crew, and the interior ministry said the captain was among those killed.

The ministry said it was investigating a possible breach of flight operation and safety rules, a standard legal procedure. There was thick fog in the area at the time of the crash.

Kazakhstan's aviation committee said it was suspending all flights by carrier Bek Air and those of Fokker 100 aircraft pending the results of the investigation.

Nazaraliyev said he had been seated next to an emergency exit in row 15 and all the rows in front of him were torn off when the plane broke in half on impact.

After the shaking started and before the crash "I had enough time to put away my phone and fasten my seatbelt", he said.

"We got out through the emergency exit ... I and other men started getting people out and away from the plane. Some were trapped by concrete debris from the building. There were moans and screams and it was dark."

Authorities cordoned off the crash site in the village of Almerek, just beyond the end of the runway.

The airport remained operational with other planes taking off after the crash.

In the airport at Nur-Sultan, relatives of the passengers - some of whom were going to join their families for the holidays - were being briefed on their fate and offered flights to Almaty.