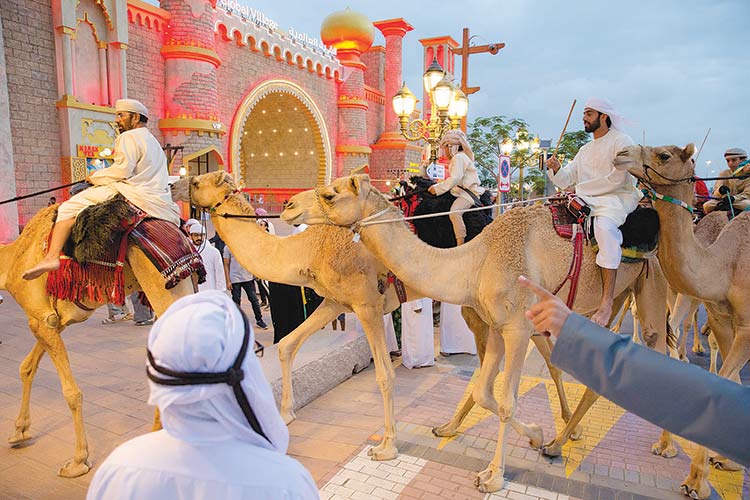 The annual camel caravan saw the participation of nine Emiratis and several expats.

The delightful surprise for the trekkers was to see His Highness Sheikh Mohammed bin Rashid Al Maktoum, Vice-President and Prime Minister of the UAE and Ruler of Dubai, who waved at them as they made their way to the Global Village. The warm welcome was captured and shared numerous times on social media.

The 6th edition of the Camel Trek  organised by the Hamdan Bin Mohammed Heritage Centre (HHC), came to a successful conclusion. The annual camel caravan saw the participation of nine Emiratis, including two young boys aged 7 and 5 years old as well as nine expats and travelers from Germany, France, Britain, China and Albania who have committed themselves to immerse in the local culture.

“The annual camel trek has become very popular among Emiratis and expats, especially among those who love to have a unique desert experience and learn the old ways of the Bedouins. The journey also connects them with nature, in addition to developing ties of friendship and cooperation among the participants,” Bin Dalmook said.

A first-time participant, German expat Linda Krockenberger, 28, said the Camel Trek gave her a better and warmer understanding of the Emirati culture. “The experience I had in desert was really very memorable. Seeing the undulating desert landscaper of the UAE was mesmerising. Now, I will be going back to the city and I will definitely miss the sand dunes, I would love to trek again. It also made me feel that I want to have a family rather than being alone,” she said.

“But the memories and bonding we created – with participants coming from various cultures and parts of the world – will be treasured for a lifetime,” she added.

Japanese-French traveller Anna Aiko, 40, who has been to several countries documenting local cultures, said that the end of the journey was just the beginning of more adventures to come.  “I will be sharing with the world what I have seen and experienced in the UAE,” she added.

Around 700 people of various nationalities and abilities applied to join in this year’s camel trek. Selected applicants underwent vigorous training, where they learned various tasks for the journey, including how to set up tents and feed the camels.

The HHC has also ensured all the necessary logistics for the entire trek, including the camels, tents, food and other provisions, and a medical team on standby.

The annual Camel Trek, which usually takes place in January, has kicked off early this time, coming on the heels of the celebration of the UAE National Day.

In another event, the qualifying race of the traditional Arabian Saluki 2,500 metres competition, held as part of the Al Dhafra Festival 2019, saw 15 Salukis qualify for the male round, and 15 Salukis for the female round, with the final challenge race scheduled for 20th December, 2019, at the Madinat Zayed Camel race track.

“Some 97 Salukis participated in the recently launched qualifying race. Six rounds were organised; three for females and three for males. The first five competitors in each round managed to qualify,” said Hamad Al Ghanim, Director of the traditional Arabian Saluki competition.