His Highness Sheikh Mohammed Bin Rashid Al Maktoum, Vice President, Prime Minister and Ruler of Dubai, has led 2019’s most popular Twitter conversations in the UAE, according to a new annual data report from Twitter.

Twitter data revealed that government-related topics were among the most popular conversations in the UAE this year. Tweets that attracted the greatest engagement were driven by Sheikh Mohammed through his official Twitter handle @HHShkMohd, which is followed by nearly 10 million people across the world.

One of the most prominent conversations related to the UAE in 2019 included a series of tweets of Sheikh Mohammed under the hashtag علمتني_الحياة# (translated as ‘Life has taught me’).

As in previous years, the tweets garnered significant interaction from the public, the report said.

Sheikh Mohammed’s most retweeted post in 2019 under the hashtag #Life_has_taught_me was, "There is no energy crisis, or education crisis, or health crisis in our Arab region. We have a management crisis. We are a people who own great resources and have great competencies, but we lack ones who will manage the resources and qualifications to build a great nation."

Sheikh Mohammed has also used Twitter to announce major government decisions and initiatives in the country and share his thoughts and wisdom with millions of followers.

A tweet by Sheikh Mohammed announcing a series of letters marking the start of a new season of work and achievements in the UAE received the highest engagement and retweets in August 2019, the report said.

The data gathered by the social networking site showed that several other tweets by Sheikh Mohammed drew significant engagement from users in 2019, including the tweet that he posted in February announcing the adoption of new housing plans for citizens.

The announcement approved the construction of 34,000 homes worth Dhs32 billion for Emiratis to be built over the next six years. 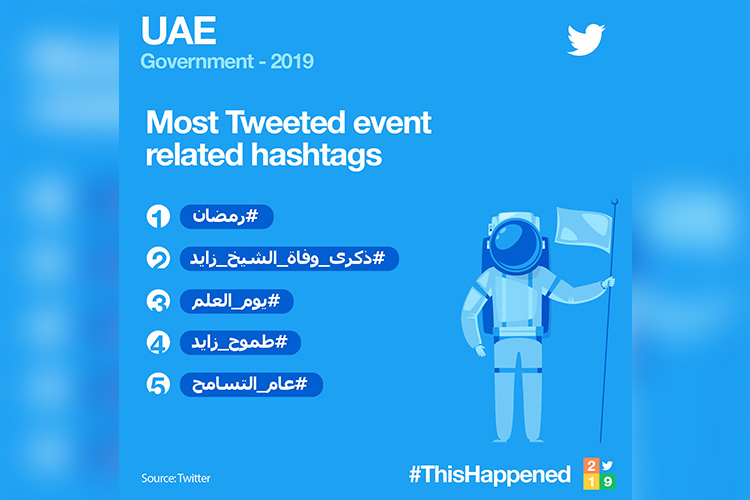 Other tweets included in the report included Sheikh Mohammed’s post in May 2019 about the launch of the permanent residency system called the ‘Gold Card.’

In the tweet, Sheikh Mohammed said, "We launched a new 'Golden Card' system to grant permanent residency to investors and exceptional doctors, engineers, scientists and artists. The first batch of 6,800 investors with Dhs100 billion worth of investments will be granted the Golden Card."

Twitter also revealed the most influential global figures that joined the platform in 2019. 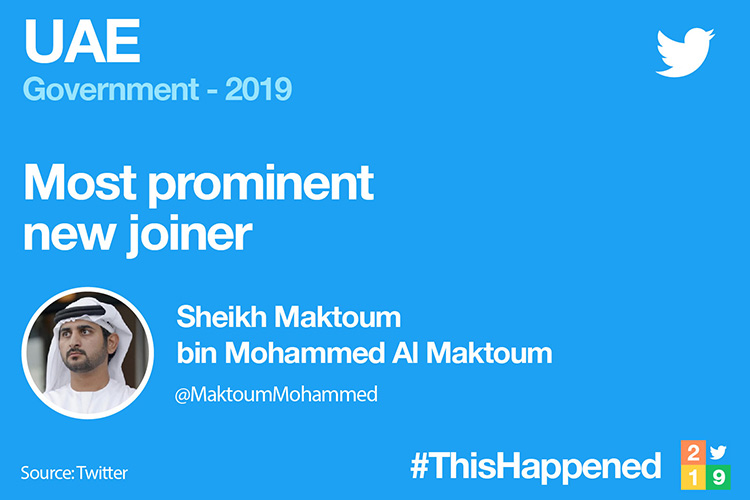 Sheikh Maktoum launched his official account during a meeting with co-founder and CEO of Twitter Jack Dorsey in Dubai. In his first series of tweets, Sheikh Maktoum said, "Dubai and Twitter share many aspects in common. Both stand as global hubs open for people, build bridges of understanding and dialogue among nations and represent platforms to nurture youth’s energies and creativity."

According to the report, the most prominent event hashtags in the UAE in 2019 included a special hashtag for the Holy Month of Ramadan; the anniversary of Sheikh Zayed’s passing; UAE Flag Day; Zayed’s ambition with regard to the UAE space mission; and the Year of Tolerance.

The first UAE Astronaut Hazza Al Mansoori’s historic space mission to the International Space Station (ISS), topped the list of UAE events that attracted the most engagement from global and local Twitter users. 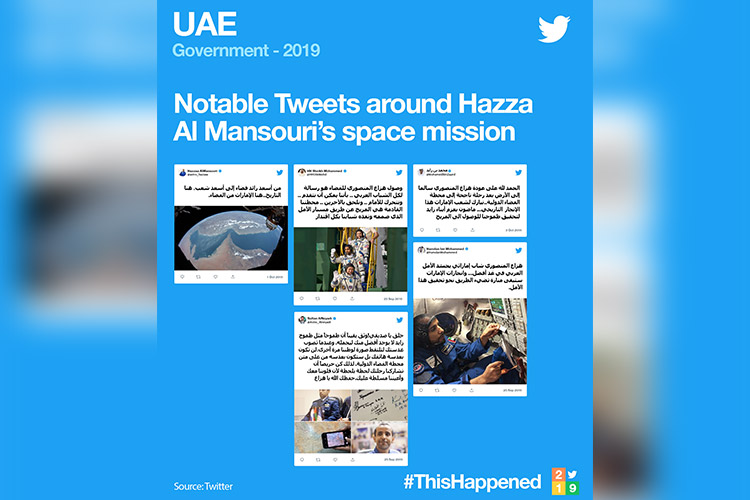 The space mission witnessed a high number of tweets, especially in the UAE, the report said.

Prominent tweets related to this event included Sheikh Mohammed’s tweet congratulating Al Mansoori on his arrival at the ISS and the picture shared by Al Mansoori showing the UAE from the ISS.

"From the happiest astronaut to the happiest nation...this is history, this is the UAE from space," Al Mansoori tweeted with the photo.

Sheikh Mohammed is among the most followed and influential leaders on the social networking site, with nearly 10 million followers.