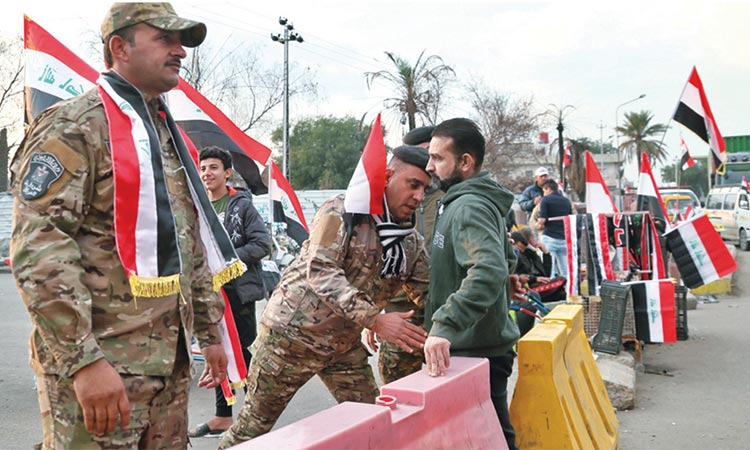 Several rockets slammed into an Iraqi military complex that hosts US forces next to Baghdad International Airport on Monday, wounding six Iraqi troops, the military said.

Security forces found launchers with rockets that had not been fired properly, indicating a larger attack was planned, a military statement said.

It is the latest in an uptick in rocket attacks targeting either Iraqi bases where American troops are located or the US embassy in Baghdad.

US defence officials have blamed several on Iran-backed factions in Iraq.

Security sources told AFP that the wounded in Monday’s attack belong to Iraq’s Counter-Terrorism Service, an elite unit that was created and trained by US forces.

Two of them are in critical condition, the sources said.

The military complex also hosts a small group of US soldiers and American diplomats. There have been at least nine attacks against US targets in Iraq in the span of six weeks.

There have been no claims of responsibility and no US forces have been wounded.

Security sources have linked at least one last week to Kataib Hezbollah, a powerful Shiite faction close to Tehran and blacklisted by Washington.

Iran holds vast sway in Iraq, especially among the more hardline elements of the Hashed Al Shaabi, a security force largely made up of Shiite militias.

A US defence official told AFP the rocket attacks made the Hashed a bigger security threat to American troops in Iraq than the Daesh, the extremist movement which the US has vowed to help Baghdad wipe out.

Tensions between Iran and the US have soared since Washington pulled out of a landmark nuclear agreement with Tehran last year and reimposed crippling sanctions.

Baghdad − which is close to both countries and whose many security forces have been trained by either the US or Iran − is worried about being caught in the middle.

US officials say they are considering plans to deploy between 5,000 and 7,000 additional troops to the region to counter its arch-foe Iran.

According to the security officials, the area targeted by the rockets is frequented by military advisers from the US-led coalition. The officials spoke on condition of anonymity in line with regulations.

Last Tuesday, five rockets landed inside the Ain Al Asad airbase, a sprawling complex in the western Anbar desert that hosts US forces, without causing any casualties and little damage.

On at least two occasions last month in Baghdad, rockets landed in areas around the heavily fortified Green Zone, the seat of Iraq’s government, causing no casualties or damages.

And near the northern Iraqi city of Mosul, a barrage of Katyusha rockets targeted an Iraqi air base that houses American troops in early November. No members of the US-led coalition were hurt.

Some hard-line Iraqi militias loyal to Iran have recently threatened to carry out attacks against Americans in the country. The US maintains about 5,000 troops in Iraq.

American forces withdrew from Iraq in 2011 but returned in 2014 at the invitation of the government to help battle the Daesh after it seized vast areas in the north and west of the country, including Mosul, Iraq’s second largest city.

The US-led coalition provided crucial air support as Iraqi forces regrouped and drove Daesh out in a costly three-year campaign.

An Iraqi paramilitary leader and a politician have laughed off financial sanctions Washington recently placed on them for alleged corruption and human rights abuses.

“They should have given us this honour a long time ago,” said Qais Al Khazali, one of the newly-sanctioned figures, in sardonic remarks to an audience of supporters on Sunday.