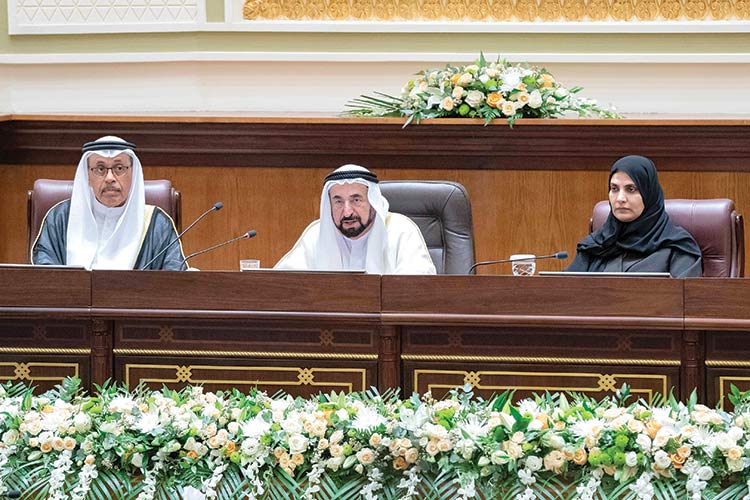 Sheikh Sultan gives opening speech at the inauguration of the first ordinary session of the tenth legislative chapter on Thursday.

His Highness Dr Sheikh Sultan Bin Mohammed Al Qasimi, Supreme Council Member and Ruler of Sharjah, praised the efforts exerted by the members of the previous session of the Sharjah Consultative Council (SCC), highlighting their distinguished role in promoting the society’s advancement and ensuring various services to the public.

This came during the opening speech of Sheikh Sultan on Thursday during the inauguration of the first ordinary session of the 10th legislative chapter, in the presence of Sheikh Sultan Bin Mohammed Bin Sultan Al Qasimi, Crown Prince and Deputy Ruler of Sharjah, and Sheikh Abdullah Bin Salem Bin Sultan Al Qasimi, Deputy Ruler of Sharjah.

During his speech, the Ruler of Sharjah called on the council’s newly elected members to exert efforts to serve the people and provide different services in various fields.

Sheikh Sultan reviewed the Council’s efforts in serving all members of the society, including the elderly, children, youth, university students, job seekers and housing applicants, stressing that all of the efforts and services are in line with the Council’s recommendations and decisions.

Sheikh Sultan pointed out that work is underway to implement 4,400 housing applications by the beginning of next year, to be completed within a year and a half.

Concluding his statement, Sheikh Sultan wished the SCC’s new Chairman and members, success in their work and tasks during the coming days.

Thereafter, the 50 SCC members were sworn in before Sheikh Sultan, pledging their loyalty to the Ruler of Sharjah to work with honesty and sincerity in accordance with his directives and vision.

Saqr Ghobash, Speaker of the Federal National Council (FNC), stated that today’s launch of the first session of the 10th legislative chapter of the SCC, attended by Sheikh Sultan, will help reinforce the participation of Emirati citizens in the decision-making process.

He added that the local electoral experience supported by Sheikh Sultan has ensured its success, affirming his belief in reinforcing the parliamentary development process witnessed by the UAE, to encourage the political participation of citizens.

He also pointed out that the Council’s launch is a key addition to the political empowerment programmes launched by President His Highness Sheikh Khalifa Bin Zayed Al Nahyan in 2005.

During the session, Ali Mehid Al Suwaidi was elected as the new Chairman of the SCC, and Hanan Rashid Al Jarwan as the Vice Chairman. Al Suwaidi then delivered a speech in which he thanked the Ruler of Sharjah for inaugurating the session.