Terrorist violence down in J&K after Article 370 axing - GulfToday

Terrorist violence down in J&K after Article 370 axing 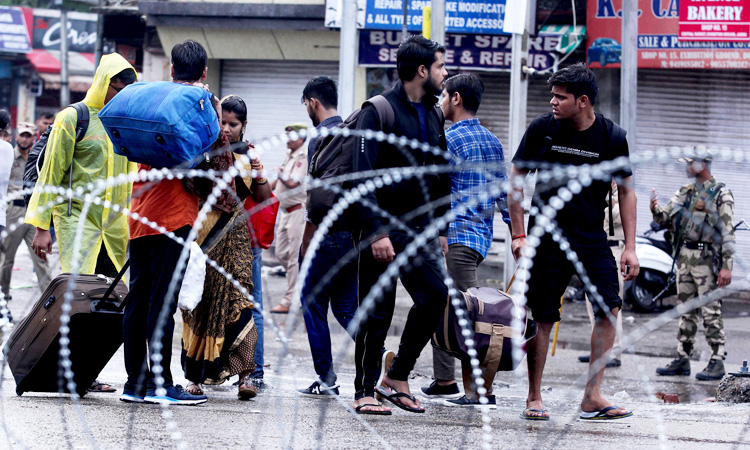 Security agencies continue to receive inputs about the intention of terror outfits that are supported and sponsored from across the border.

The incidents of terrorist violence in Jammu and Kashmir have declined after the abrogation of the Constitution’s Article 370 on Aug.5, with just 88 incidents reported in 115 days since then, Parliament was told on Tuesday.

In a written reply in the Lok Sabha, Minister of State for Home G Kishan Reddy said: “The incidents of terrorist violence have declined after Aug.5, 2019.

Reddy also said that during the same period, there has been an increase in the number of infiltration attempts from across the border.

However, over all infiltration has gone down, with 114 attempts till October this year, as against 143 last year.

“Security agencies continue to receive inputs about the intention of terror outfits that are supported and sponsored from across the border, to indulge in terror attacks and breach of security in Jammu and Kashmir.

“Based on the inputs and past history of cross border terrorism in Jammu and Kashmir, all necessary precautions and preventive steps including cordon and search operations (CASO) are undertaken by the security forces in a proactive manner to flush out terrorists and 157 terrorists have been neutralized during the year 2019 so far,” he said.

Reddy also said that the government has adopted a multi-pronged approach to contain cross border infiltration.

“Infiltration has come down significantly. It is not of the same level as it used to be, when snow falls people infiltrate, but it has nothing to do with scrapping Article 370.

“Pakistan forces always resort to firing when there is infiltration, the aim behind ceasefire violations is also to facilitate infiltration, but our forces are alert to foil infiltration attempts.” He said while the infiltration graph has fallen, Pakistan has not closed the training camps.

“Militants are present in all the launch pads in Pakistan and waiting for an opportunity to sneak into Indian territory,” he said The infiltration levels peak before the snow falls. It is relatively less in winters, but that may not always result in a drop in violence in the valley.

anwhile, the Supreme Court on Tuesday stayed the bail of an alleged member of the Lashkar-e-Taiba (LeT), apparently perceived as a threat to national security by the security agencies.

The Bombay High Court had granted bail to Mohammed Irfan Gaus in July this year in a case under investigation by the National Investigation Agency (NIA).

A bench headed by Justice R Banumathi said: “Considering the fact that the trial of the case is almost at the verge of completion and the facts and circumstances of the case, there shall be stay of the impugned order until further orders from this court.” Solicitor General Tushar Mehta representing the NIA submitted that considering the seriousness of the allegations against him, if he is allowed to be at large then there is a likelihood of the recurrence of commission of offence which might affect the security of the nation.