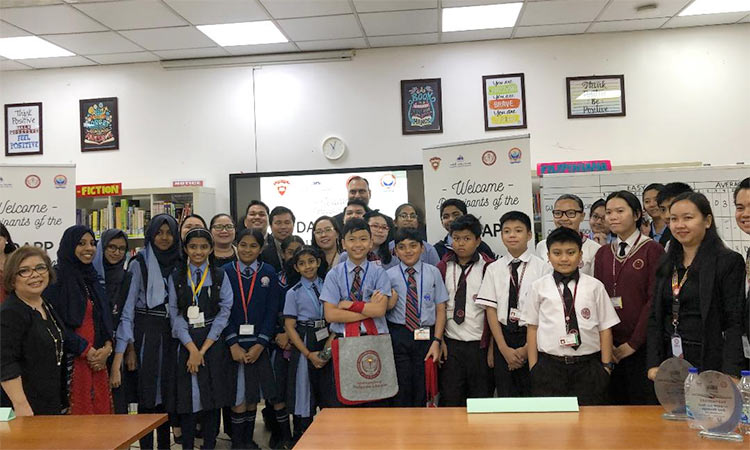 The participants at the ‘2nd DAPP Quiz Bowl-UAE Heritage’ hosted by the United International Private School in Al Qusais, Dubai on Tuesday.

Students of Pristine Private School (Pristine) on Tuesday scooped the top scores against their neighbours in Al Muhaisnah, Al Qusais, Dubai at the “2nd DAPP Quiz Bowl-UAE Heritage,” in commemoration of the 48th UAE National Day on Dec. 2.

The competition, in the elementary and secondary categories, stems from the 10-year-old “Dubai Appreciation Promotion Programme” of the United International Private School (UIPS), event host for the second time since 2016.

Delighted and surprised, Benedict Adriano (Grade 7), Danish Asim (Grade 6) and his sister Amal Asim (Grade 7), and Grade 8 students Heather Ashlee Binay, Doaa Ehtesham Siddiqui and and Hithanadurage Anthony Dwaine De Silva, attributed their achievement to the strong foundation their parents and their schools have imbibed in them by way of the appreciation for an immense library, the value of history as well as being abreast with current events.

They were informed of their being school representatives only on Monday through individual emails to their parents.

Amal believes “stored knowledge” helped them cruise through the easy to jaw-dropping questions on world/regional/UAE history, geography and current events.

Danish thought he was the “worst (in everything related to Social Studies),” reminded himself “to chill” if they lose.

“The best is we had fun.” Their group coach, Humanities teacher Leslie Ann Dizon, credited the students’ strength on their two Social Studies classes twinned with Moral Values Education. There is also the three-year-old “Annual Community Book Reading” a.k.a. “books reading chain-cum-open discussions” among the administrators, faculty members, staff, students and parents for at least three hours—incidentally held also on Tuesday.

Adriano, Binay, Siddiqui and De Silva agreed, adding their own interest in cracking-a-book each day other than the required academic readings as well as going over the daily news helped them navigate on Tuesday.

The students went home each with a Huawei tablet aside from other goodies.

Coming close for the second was UIPS with a total of 102 points. Gulf Model School raked in a total of 89. Oxford School participated only in the elementary competitions with 21 points since the high school students were engaged in another activity.

The assigned coaches formulated the questions, sealed and locked in a box, from three weeks back and only opened by quizmaster Roel Pulangco of the Skyline University College (SUC) in Sharjah on Tuesday.

It was determined to get an “independent” quizmaster from Sharjah for fairness’ sake. Sharjah is also the “Cultural Capital.” UIPS Community Relations manager Jennifer Gonzales said the idea of inter-school competitions was born out of the support of the school owner/managing director Dr. Mohamad Al Neyadi to her concept paper in 2009 when she joined the school management.

The concept paper was a result of a series of interviews she had with overseas Filipino (OFs) students from across the globe when she was the Philippines’ Office of the President-Commission on Filipinos Overseas undersecretary (2005-2009). The interviews revealed the lack of the students’ connections with their respective host countries which for her was woeful.

“Something had to be done. A big number of them are second generation OFs.” From the UIPS DAPP inter-class competitions, this was proposed among the other Al Muhaisnah schools in 2016.

Primary purpose was to help the youth deepen their individual connections with Dubai, their host government; the UAE, their host country; and the Middle East, their region. Secondary goal was fraternity.

Gonzales said the participating schools are together in pushing forward the significant rooting of their youth where they are since being so would help them become more responsible individuals.

“We hope as educators, we help fulfil the Vision 2021 of our host country grounded on the UAE heritage and culture.” Gonzales said Oxford School already expressed interest in hosting the 2020 edition.