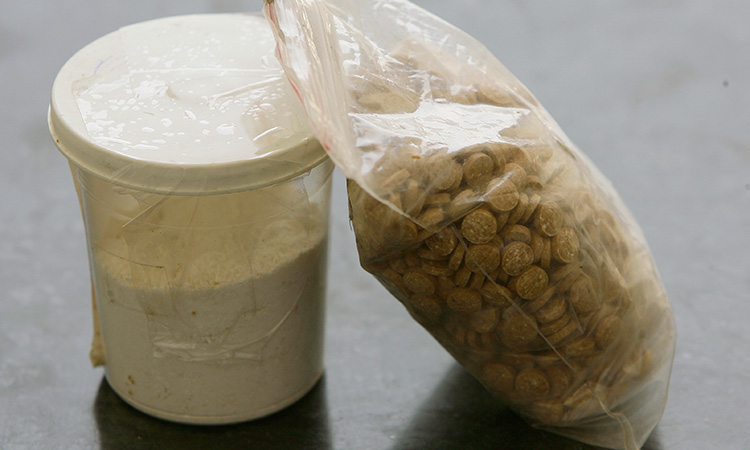 The Dubai Public Prosecution on Sunday referred two unemployed suspects (Khaleeji and Arab) to Dubai Criminal Court over the charge of possessing more than 92 kg of Captagon.

They also intended to pass the narcotics to a neighboring country using spices powder to camouflage and hide its smell.

According to the police records, the suspects had been put under surveillance after the Anti-Narcotics Department at the Dubai Police had received verified information about two persons belonging to an overseas gang peddling in drugs possessing a large quantity of drugs. It was also learnt that they were seeking a way to pass the narcotics to a neighboring country, the Court heard.

“An undercover agent contacted the first accused offering to help transfer the narcotics to that country in return for a sum of money”, the records said.

After the suspects took the bait, the security teams set an ambush, so that they had been arrested red-handed.

This was after the undercover agent received a call from the first suspect informing him that he would wait until 1:00 am to ensure that the location of meeting was empty of passersby. On his way to that location, his car stuck in sands. He called the police agent and informed him.

The security teams managed to locate the suspect’s car, which was seized and searched. The first suspect was arrested, while the narcotics were found inside the car. It was a large amount of Captagon estimated about 92 kg, in 125 plastic rolls that also contained powder of spices to hide the smell of drugs.

At the same time, another car was monitored in the area. It was the second suspect who was protecting back of his partner.

He tried to flee quickly when realized that his partner had been seized, but failed, because the security teams noticed him and he was arrested too.

In another case, the Dubai Criminal Court on Sunday sentenced a 32-year-old African employee to six months in jail plus deportation, on charges of kidnapping a European woman and assaulting her five times under threat.

The victim testified that she had known the suspect through a social media platform and agreed to meet at a restaurant for dinner.

She added that the suspect headed to her place in a taxi, where he asked her to go with him. They headed to the place where he resided and got out of the car. He asked her to go up with him, but she refused. He allegedly took out a needle out of his pocket and threatened to prick it with it.

When she did not find anyone in the place to help her, she went up with him to his apartment where he assaulted her five times over two days.

When the suspect was arrested and investigated, it turned out that he had already been referred to court in similar cases, in which the victims were Europeans.