Vice President and Prime Minister of the UAE and Ruler of Dubai His Highness Sheikh Mohammed Bin Rashid Al Maktoum took to Twitter to announce that the UAE Pioneers Award for the current year will honour individuals and initiatives that promote the spirit of tolerance and peaceful coexistence in UAE society.

Sheikh Mohammed called on citizens of the UAE to nominate individuals and projects that actively promoted tolerance in the Year of Tolerance on the Twitter hashtag #UAE_Pioneers and through the website uaepioneers.gov.ae

Sheikh Mohammed emphasized that the United Arab Emirates is a shining model of tolerance and openness in the region. The UAE Pioneers Award is given to individuals, initiatives, projects to honour a pioneering spirit that has a positive impact on society. 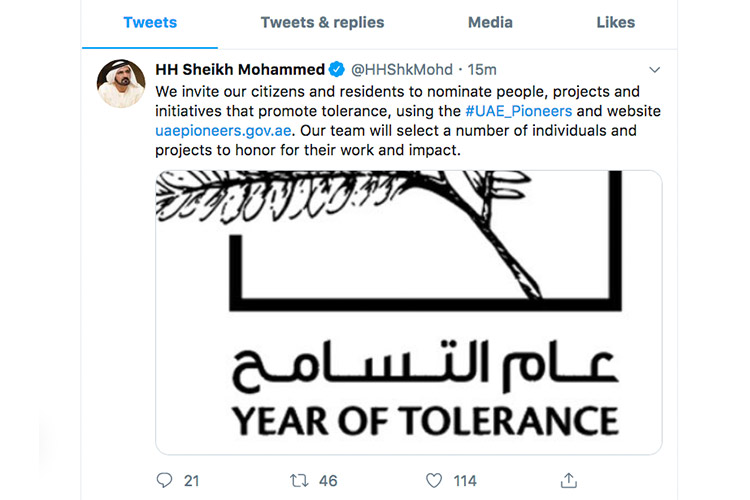 The 6th UAE Pioneers Award theme resonates with announcement of this year as the Year of Tolerance by President His Highness Sheikh Khalifa Bin Zayed Al Nahyan.

Nomination is open through uaepioneers.gov.ae until 22 November 2019. The honouring ceremony will be held as part of the UAE Government's Annual Meetings agenda that coincide with the 48 National Day celebrations.

The Awards were the culmination of a social media initiative that was launched with a tweet from Sheikh Mohammed’s Twitter account in November 2014. The hashtag campaign prompted Emiratis to nominate fellow countrymen and women who they believed were pioneers in their respective fields.