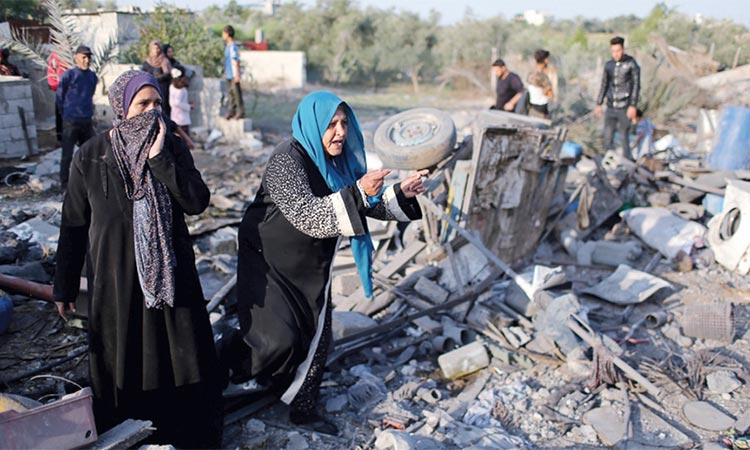 Palestinian women react as they inspect a house destroyed in an Israeli air strike in Gaza Strip on Thursday. Reuters

Gaza fighters fired a barrage of rockets into Israel on Thursday, hours after a cease-fire was declared to end two days of intense fighting between Israel and the Islamic Jihad group, the heaviest escalation in months that killed at least 34 Palestinians, including three women and eight children, and paralysed parts of Israel.

No one immediately claimed responsibility for the new wave of rockets and it wasn’t clear how this would affect the fate of the cease-fire.

Islamic Jihad said it had succeeded in getting Israel to agree to a cease-fire based on several demands, including a halt to Israeli targeted killings of the group’s leaders.

Islamic Jihad spokesman Musab Al Berim said the Egyptian-brokered deal went into effect at 5:30 a.m. An Israeli military spokesman tweeted that the Gaza operation “is over.”

Some restrictions were lifted on residents of southern Israel and traffic returned to the streets of the Palestinian coastal territory.

But after hours of calm, a barrage of rockets blasted out of the territory, setting off air raid sirens in southern Israel and testing the fragile truce.

The fighting first erupted early on Tuesday after Israel killed a senior commander of the Iranian-backed militant group who was said to be behind a string of rocket attacks and who Israel said was believed to be planning a cross-border infiltration.

The rare targeted killing by Israel sparked the heaviest fighting with Gaza fighters since May. Islamic Jihad fired some 450 rockets toward Israel, while Israel responded with scores of airstrikes.

Gaza’s ruling Hamas group, much larger and more powerful than Islamic Jihad, stayed out of the latest escalation - an indication it would be brief.

Military spokesmen listed a series of accomplishments after the two-day spasm of violence, including the killing of some 25 militants in targeted strikes.

Israeli Foreign Minister Israel Katz said the policy had “proved itself” and would continue.

“Everyone who was a top military official, who was set to carry out and was involved in terror or rocket firing against Israel was eliminated,” he told Israeli Army Radio. “And we intend to continue with this.”

Israeli Defense Minister Naftali Bennett warned Gaza fighters they were not safe anywhere. “A terrorist who tries to harm Israeli citizens will not be able to sleep soundly, not in his home and not in his bed and not in any hiding place,” he said.

Palestinian officials say 34 people were killed in the fighting, including at least 18 militants. They say eight children, including a pair of 7-year-olds, and three women were among the dead.

The rocket fire crippled life across southern Israel and on Tuesday, also in the country’s heartland in and around Tel Aviv, as nonstop air-raid sirens canceled schools and forced people indoors. At least three people were lightly wounded from shrapnel or shattered glass.

Most rockets landed in open areas or were shot down by Israel’s Iron Dome missile defence system.

Much of Gaza resembled a ghost-town, with almost no vehicles on the roads except for ambulances evacuating the wounded.

Al-Berim, the Islamic Jihad spokesman, lauded the group’s efforts against Israel, saying it “had its word, confronted the aggression,” and “defended the Palestinian people.”

Shortly after Al Berim’s cease-fire announcement, two rockets were fired out of Gaza, setting off sirens in southern Israel. It was not immediately clear whether the launches were intentional or misfires caused by electronic timers. Israel didn’t respond.

Islamic Jihad said the fire was likely because word hadn’t spread to all members about the halt to violence.

The Israeli military’s Home Front command tweeted that it was lifting restrictions in certain areas but leaving them in place in the areas surrounding Gaza.