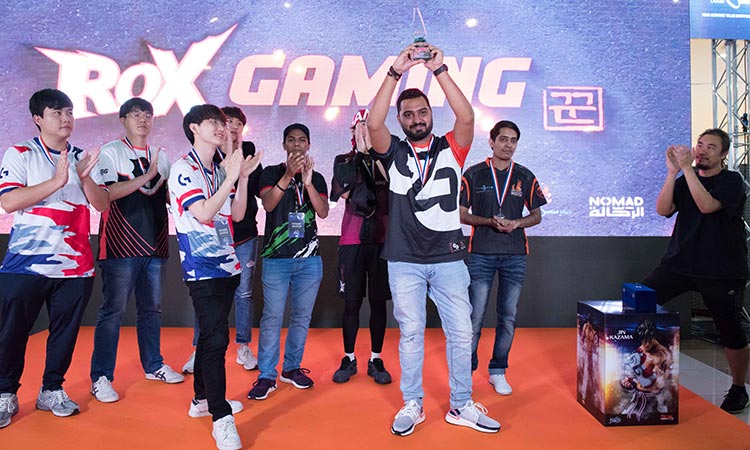 Winners of the tournament celebrate with their trophy.

RoxNRoll 2019, the first official international Tekken Event in Dubai was held on Nov.8 and 9 at the Dubai Outlet Mall with over two hundred international gamers participating.

Supported by Dubai Sports Council and the Emirates Esports Association, the two-day tournament was the final Master Event before the Tekken World Tour (TWT) Grand Finals taking place in Bangkok in December.

The thrilling tournament brought together key players from local and international eSports industry, with exciting opportunities for gamers from over twenty-three different countries to challenge the top players of TWT 2019 International Leaderboard. The event was broadcast live online via Twitch to thousands of viewers worldwide.

‘RoxNRoll Tekken World Tour 2019 marks the start of NOMAD’s foray in fueling the global eSports industry. We are excited for NOMAD to serve as a platform to elevate young talent to global recognition. Aligned with this mission, we are driving a series of initiatives to establish Dubai as the hub for creativity and innovation,” said Khammas.

Through this event, NOMAD also introduced Dubai based music producers and artists such as Mohammad Rayan Bailouni and Menon to fuse their music into the event activities.

As part of its comprehensive infrastructure roll-out, NOMAD will launch a Phase I venue at 117 Live Arena with co-working spaces, event spaces, a recording studio, content studios and an eSports studio specifically for gamers and content producers. With innovative events and broadcast solutions, 117 Live Arena and NOMAD will become the hub for the gaming community to access upcoming eSports activations and tournaments.