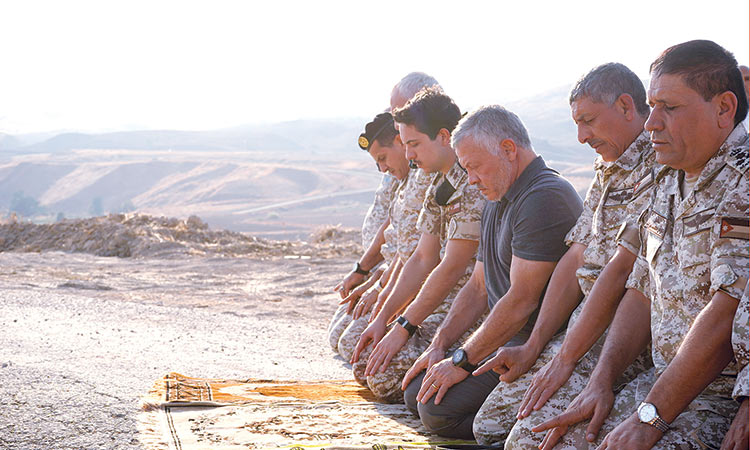 King Abdullah (third right) prays as he takes part in a ceremony in the border area between Israel and Jordan on Monday. Reuters

Jordan said on Monday it was committed to its landmark peace treaty with Israel despite ending a 25-year deal that allows its neighbour to use two parcels of land along its border under its sovereignty, its foreign minister said.

In a news conference, Ayman Safadi said the country acted in accordance with the treaty in not renewing the deal over the two enclaves straddling the border that allowed Israel special rights over its citizens working and present in the two areas.

Jordan’s King Abdullah paid his first visit on Monday to an enclave fringing its northern border with Israel a day after the expiry of a 25-year special regime that allowed Israeli farmers access to the area, official sources said.

The king on Sunday declared an end of the arrangement.

Under the 1994 Jordan-Israel peace treaty, two territories straddling the border were recognised as under Jordanian sovereignty but with special provisions allowing Israeli farmers to work the land without visas.

But in 2018, Jordan said it did not want to renew the arrangement, in what was widely seen as a sign of increasingly strained bilateral relations.

Jordan is one of only two Arab states with a peace accord with Israel, and the neighbours have a long history of close security ties. But the treaty is unpopular in Jordan where there is strong support for Palestinians who seek the Israeli-occupied West Bank, bordering Jordan, for part of a future state.

On Sunday, Israelis were prevented from entering Jordanian border enclaves after the deal allowing farmers to work land there expired.

A journalist in northern Israel on Sunday said the yellow gate to a bridge over the river dividing the two countries, long the portal for Israeli farmers to access Baqura, was locked.

Baqura, known in Hebrew as Naharayim, lines on a spit of land where the Jordan and Yarmuk rivers meet.

Ghumar, deep in the Negev desert south of the Dead Sea, is known in Hebrew as Tzofar.

Opinion polls have repeatedly found that the peace treaty with Israel is overwhelmingly opposed by Jordanians, more than half of whom are of Palestinian origin.

Three years earlier, an Israeli soldier at a border crossing killed a Jordanian judge he deemed a threat.