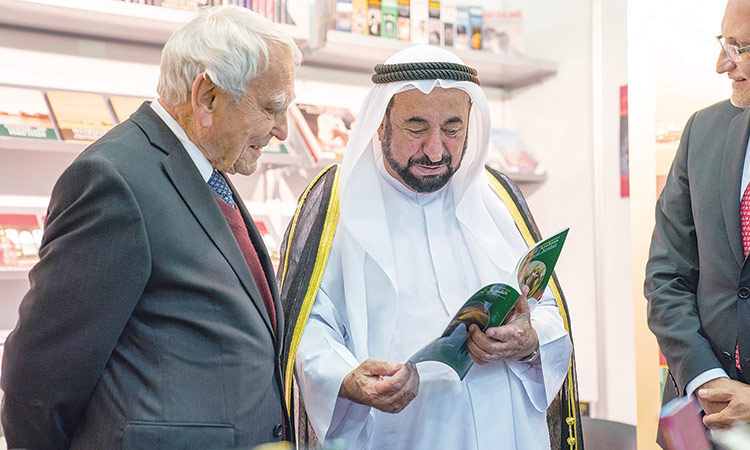 His Highness Dr Sheikh Sultan Bin Mohammed Al Qasimi, Supreme Council Member and Ruler of Sharjah, has emphasised the role poetry plays in preserving Arab culture and heritage, during a meeting with various directors who lead “houses of poetry” across the Arab world.

During the meeting, which took place on Thursday at the Dr Sultan Al Qasimi Centre of Gulf Studies, His Highness noted the importance of preserving the Arabic language, and development of human society through the transfer of knowledge from one continent to the next.

Sheikh Sultan highlighted the history and origins of poetry, and the significant contributions the literary art form has made to build bridges of communication, engage in Arab cultural understanding, and how it fostered the growth of many intellectuals and writers.

He went on to note the unique features and styles of Arab poetry, adding that it evokes the multiple identities and customs of the Arab world.

The meeting attendees discussed with Sheikh Sultan the necessary involvement of young individuals during poetry events, to further support their creative skills and talent.

The directors relayed to His Highness the various programmes and events being organised by the poetry houses throughout the Arab world, and the efforts exerted to enrich and enliven the Arab poetry scene.

On Wednesday, Sheikh Sultan toured the publisher and exhibitor pavilions participating in the 38th edition of the Sharjah International Book Fair (SIBF). Two thousand publishing houses from 81 countries are represented at the event which runs from Oct.30 to Nov.9 at the Sharjah Expo Centre, under the theme “Open Books Open Minds.”

The Ruler of Sharjah started the tour with a visit to the Mexico - Guest of Honour pavilion, and learnt about the significance of the various literary collections, including manuscripts, traditional tools and paintings on display.

The Sharjah Ruler stopped at the Al Qasimi Publications’ pavilion to sign a collection of his new books. His Highness visited the pavilions of several government and cultural entities like Ministry of Tolerance, MoT, Ministry of Education, MoE, and the UAE Board on Books for Young People, UAEBBY. At the Emirates Publishers Association, EPA, pavilion, His Highness was briefed on the entity’s key achievements in supporting local publishers and promoting books and culture.

He visited the displays of various cultural entities in the emirate, like the Sharjah Art Foundation (SAF), Sharjah Department of Culture (SDC), Sharjah Tourism and Commerce Development Authority (STCDA), Department of Statistics and Community Development, (DSCD), University of Sharjah (UoS), Knowledge without Borders (KwB) and its 1001 Titles initiative, and Sharjah Center for Learning Difficulties (SCLD).

The Ruler of Sharjah was offered an insight into Sharjah Broadcasting Authority’s key initiatives to support authors and publishers, in addition to the SIBF 2019 cultural programme.

At the Sharjah World Book Capital 2019 pavilion, officials recounted the events delivered since the emirate began its yearlong celebrations this April, as well as current and future activities, to the Sharjah Ruler.

He also visited the stands of several local and federal entities, and the pavilions of GCC and other Arab countries, before moving on to the booths of local and international publishers to explore their collections.

During the tour, many authors as well as local and international publishers presented His Highness the Ruler of Sharjah with their books in appreciation of his unparalleled support to culture.