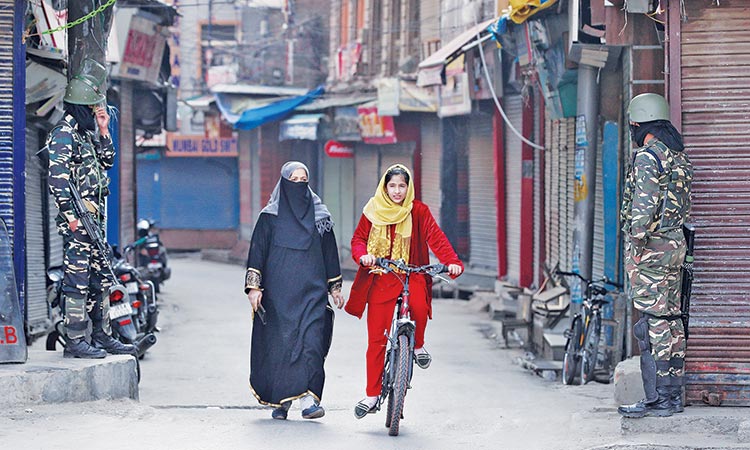 A Kashmir girl rides her bike past Indian security force personnel standing guard in front closed shops in a street in Srinagar on Wednesday. Reuters

The visit of a team of Members of the European Union Parliament (MEPs) to Jammu and Kashmir created a major controversy on Wednesday as the opposition said internationalising Kashmir was a sin, and the sponsor of the Europeans went missing.

This is the first visit by any international delegation to the Valley after the Indian Parliament scrapped the special status of the state and special privileges given to its residents and split Jammu and Kashmir into two Union territories on August 5.

The organiser of the visit, Madi Sharma, was reported “missing” on Wednesday.

Emails inviting the MPs went from Sharma, who describes herself on Twitter as a Social Capitalist, International Business Broker and Education Entrepreneur. Her emails said the visit, described as private, is sponsored by the International Institute for Non-Aligned Studies, a think tank. However, its office in Delhi remains locked.

The International Institute for Non-Aligned Studies, founded by Dr Govind Narain Srivastava in 1980, claims to have “provided a platform to voice the viewpoint of billions of people of the third world” on its website as their mission statement.

Srivastava had been running the paper New Delhi Times. He passed away in 1999. Sharma’s reports in the paper were credited to “EU Correspondent.” Madi Sharma was present when the European MPs met Prime Minister Narendra Modi and National Security Adviser Ajit Doval on Monday.

Her email said: “I am organising a prestigious VIP meeting with the Prime Minister of India, His Excellency Narendra Modi and it is my privilege to offer this invitation to you.

“As you will be aware Prime Minister Modi had a landslide victory in the recent elections in India and is planning to continue on his path of growth and development for India the country and its people. In that respect, he would like to meet influential decision makers from the European Union.”

The main national opposition Congress party, meanwhile, slammed the Centre for allowing the visit. “Will the Prime Minister tell who Madi Sharma is? Why and in what capacity is Madi Sharma fixing an appointment of Prime Minister with a delegation of EU MPs on a personal visit and why is Government of India facilitating it?

“Where is the money to finance the entire trip coming from? Why has Ministry of External Affairs been totally sidelined? The truth is that this is the biggest diplomatic blunder in India’s history,” said Congress spokesperson Randeep Surjewala.

The government committed the “gravest sin” by inviting the MEPs to Srinagar and violated India’s time-tested policy of Kashmir being an internal matter, the Congress said.

“We will not accept or third party mediation of any nature from any government or group of people or organisation or any individual. Modi government has committed the gravest sin of reversing this policy over last three days.” “Modi government has deliberately internationalised Kashmir issue violating our time tested policy of Kashmir being an internal matter of India,” he added. French news agency Agence France-Presse reported that the European parliament and European Union hierarchy were not involved in this visit. Several European embassies in Delhi were unaware of the visit until Monday, the agency said.

At the same time, the delegation of MEPs asserted in a media interaction after returning from Kashmir that they were not here for politics.

“We are your friends, we are here to find facts,” a member of the team told the media.

The MEPs said that they had “fascinating meetings” with representatives of the civil society where issues ranging from re-opening of schools and corruption were discussed.

Henri Maloose, an MEP from France, thanked the Indian government for allowing them to visit Kashmir, and see things for themselves on the ground. However, he regretted that the delegates were being labelled as “Islamophobics,” “fascists” and “racists.”