‘Wooden Chair’ knocks on the hearts of teachers - GulfToday

‘Wooden Chair’ knocks on the hearts of teachers 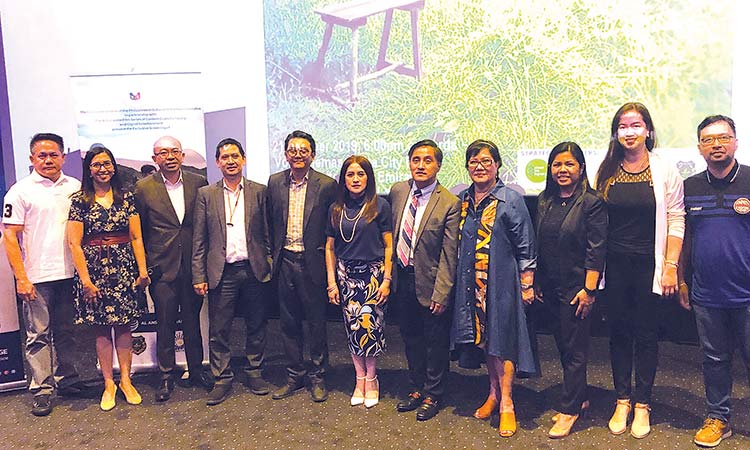 At the special screening of “Wooden Chair” in Deira City Centre.

An advocacy film featuring a bully and the bullied becoming victors despite their frailties has bulls-eyed Filipino teachers and students in Dubai and the Northern Emirates.

Metaphored by a “bangko” amidst the backdrop of an impoverished educational system in poor-dirt and far-flung communities in the Philippines, the “Wooden Chair” (bangko) was recently screened in Deira City Centre.

The one-night screening was a collaboration among the Philippine Consulate General in Dubai and the producers namely the Advocasine Film Series of Content Cows Company and Cignal Entertaintment.

Brainchild of the 2018-produced 80-minute non-commercial film is Wilma Galvante, among the distinguished behind-the-scene personalities in the Philippines’ cut-throat TV industry since 1965.

Interviewed, Galvante said Manila’s Movie and Television Review and Classification Board which gave the PG-13 rating had asked her why it was not for theatre release.

“We really meant it that way. We want a captive market who would embrace what we want to send across, with whom we could embed value-laden messages. It is the embedding that is more important,” Galvante said.

Her next project is on the mainstreaming of special needs children, an addition to the other advocacy films about mental health and HIV-Aids.

Galvante said communication with Consul General Paul Raymund Cortes a few months back had revealed they both believe education is the means to conquer poverty and achieve one’s dreams without compromising family values.

While the Dubai outing of the “Wooden Chair” is considered its international debut, it was among the finalists at the Japan Prize International Contest for Educational Media 2018.

Japan Prize, since 1965, has been supporting educational media for better international understanding and cooperation.

Galvante acknowledged before the audience, which included officials from the Pristine Private School in Dubai, the presence of 19-year-old Abu Dhabi resident ICT person Benny Guinoo, father of the young child non-professional lead actress, Jhie Ann Guinoo, who had lived in the capital for a few years. It was Benny’s first time to see his daughter act onscreen.

The Dubai debut comes at a time when the United International Private School (UIPS) in Dubai—where “Wooden Chair” was shown on Sunday—has one of its senior management officials, Jennifer Gonzales, chosen as among the awardees of the “2019 Outstanding Unesco Club Educator of the Philippines” for her “relentless passion in international education in the academe and in the community with the unanimous approval of the board of the National Coordinating Body of Unesco Clubs in the Philippines.”

Gonzales expressed support to the film that bespeaks of character building grounded on “social responsibility, love of country and love of family” through education and family ties.

UIPS Grade 10 student/Supreme Student Council president Ma. Erika Julia P Alquiza, “The movie is not watered-down nor euphemized and so is an eye-opener. The interpretation was just right for us target audience. The characters are around our age. We related to them despite the large difference in our living conditions. It made us ponder over our being fortunate in the UAE and what actions we may start to give a solution to the issues.”

Far Eastern Private School (Feps)-Al Azra Grade 7 student Pretty Xandie Jhil Mina, “The movie made me realise the value of people around me who constantly remind me of how education is very vital for my future. Let us be aware of the under-privileged who need our help.”

Feps-Al Shahab Senior High School coordinator Caroline Pagador, “Perhaps a collaboration for scholarships among the schools and the alumni would be a big help.”

UIPS Grade 10 student Simeon Carlos Lavarias, “The movie taught me a multitude of values. Being grateful for what I have, being helpful, and being compassionate. One line in the movie says: ‘We always have a choice in life, to do wrong or do good.”