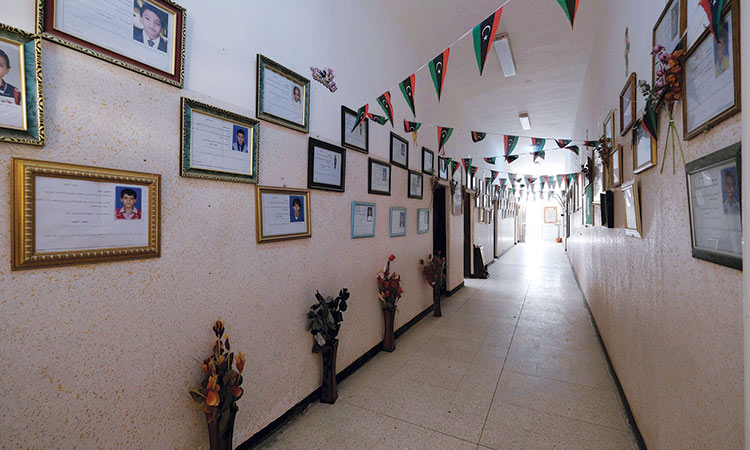 A view of the administration building inside a closed school in Benghazi, Libya, on Oct.17. File/Reuters

Strikes are keeping classrooms shut at the start of the school year in Libya as teachers seek better pay from a budget under strain from a massive public salary bill and renewed conflict.

State-run schools were meant to open on Oct.13, but teachers angered by falling living conditions and stagnant wages have been staging sit-ins in Benghazi, Libya’s second city, and Tripoli, the capital.

Chemistry teacher Ramadan Mohamed, a 47-year-old father of six among those on strike in Benghazi, said he had been forced to take up work as a taxi driver to provide for his family.

“There are times I miss classes when I have financial obligations,” he said. “If I had an excellent salary that covered the needs of my home, I wouldn’t do another job, I’d devote all my time to students and teaching.” Living standards in oil-rich Libya, once one of the wealthiest countries in the region, have been sliding downwards amid stop-start warfare and political turmoil.

Monthly salaries range from 500 to 850 Libyan dinars in state-run schools ($360-$610 at the official exchange rate, much less on the parallel market).

Schools are run down, and teachers do not receive health insurance or bonuses.

Libya has been split between rival governments and parliaments based in Tripoli and the east from 2014. For the past six months forces led by military commander Khalifa Haftar and aligned with the eastern government have been waging a campaign to take control of the capital. The fighting has drained resources on both sides.

Much of Libya’s population of 6.5 million depends on state salaries, which account for more than half of all public spending — a legacy of corruption and political patronage before and after 2011.

Funded by oil revenues, salaries are paid by the Tripoli central bank to citizens across the country. Some fraudulent or duplicate salaries have been eliminated, but many collect wages without working.

The education sector is especially bloated. Officials in Tripoli said nearly 240,000 teachers and other staff were on its books in western and southern regions, including 60,000-70,000 replacement teachers. The head of the teachers’ union in Benghazi said another 190,000 teachers were registered under the government in the east.

The eastern parliament approved a decree last year to increase teachers’ salaries, but it has not been implemented.