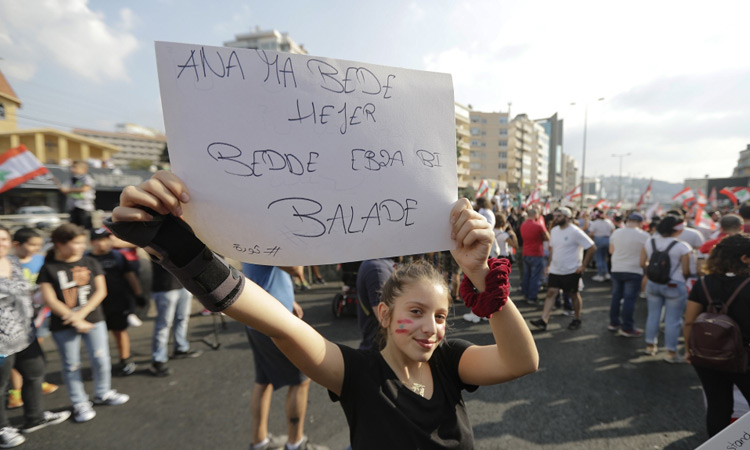 A girl holds a placard a day after demonstrations swept through the eastern Mediterranean country in protest against dire economic conditions. The slogan written in Latin letters reads in Arabic ' I do not want to immigrate, I want to remain in my homeland.'

Lebanese soldiers started their clampdown on protesters in the capital amid a wave of demonstrations against tax increases and corruption.

The proposed tax measures included a surcharge on WhatsApp calls, which was later scrapped after public anger swamped the authorities.

The protesters were demanding a radical overhaul of Lebanon's political system, complaining against austerity measures.

The country is suffering from very poor financial health: it has one of the highest public debt burdens in the world and the government is trying to reach an accord on a slew of steps to stem the deficit in next year's budget. 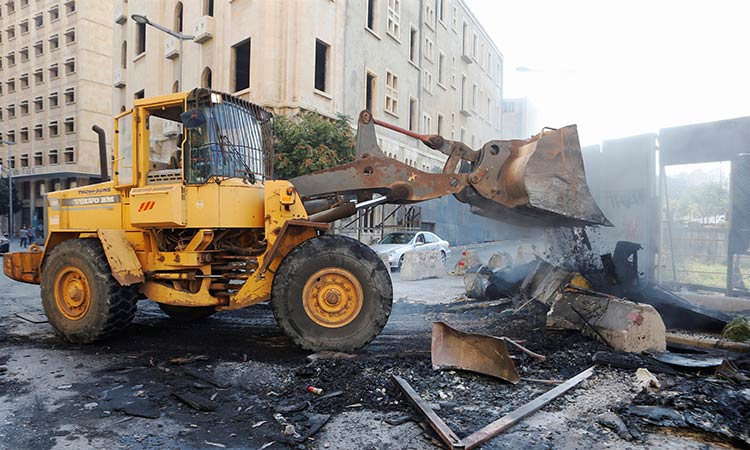 A front loader remove debris along a street in Beirut, Lebanon. Mohamed Azakir/Reuters

The apathy to address civic issues, which included disturbing eyesores in the form of mountains of rubbish littered all over the city, also provided the trigger for the people to storm the streets.

Troops reopened some major roads that had been blocked by protesters after firing tear gas and water cannon in the early hours of Saturday. The crowds had gathered in Riyadh al-Solh Square in the heart of the capital Beirut. Seventy demonstrators were reportedly arrested.

Prime Minister Saad Hariri has given his deeply divided coalition partners until Monday evening to give their backing to a reform package aimed at shoring up the government's finances and securing the disbursement of desperately needed economic assistance from donors.

Groups of young people gathered on the streets of the capital during the morning, preparing for a new day of protests despite the growing crackdown. 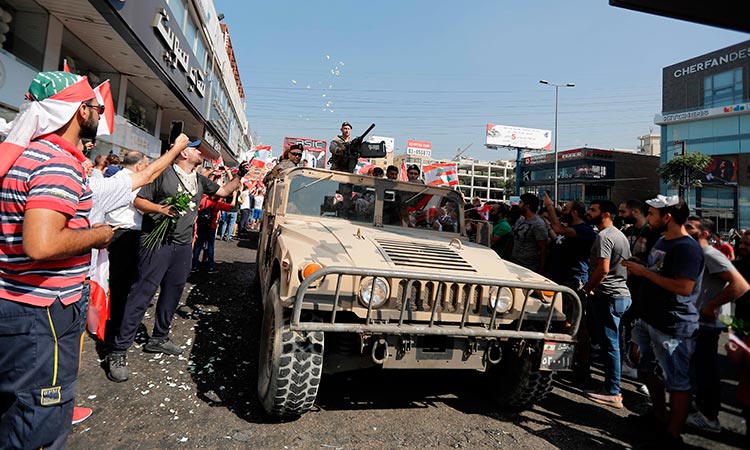 They collected tyres and other material with which to throw up improvised roadblocks.

Parts of central Beirut looked like a war-ridden area, with sprawling broken glass, overturned litter bins and the remains of burning tyres. Banks and many restaurants and shops remained shuttered.

The demonstrations first erupted on Thursday, sparked by a proposed 20 cent tax on calls via messaging apps such as WhatsApp.

However, the promised austerity moves are reported to be essential if Lebanon is to unlock $11 billion in economic assistance pledged by international donors last year.

Thousands of people of all ages, sects and political affiliations brought the capital to a standstill on Friday, with demonstrations reported across the country.

Minor clashes continued through the night pitting groups of young men against the army, an AFP reporter said.

One protester in the southern city of Nabatieh, a Hezbollah stronghold, vowed to defy the crackdown.

"They are trying to portray us as a mob, but we are demanding our rights," he told a local television channel.

"We are used to repression."

A host of countries, including UAE, Saudi Arabia, Kuwait and Egypt, have issued travel advisory for its citizens residing in the country. 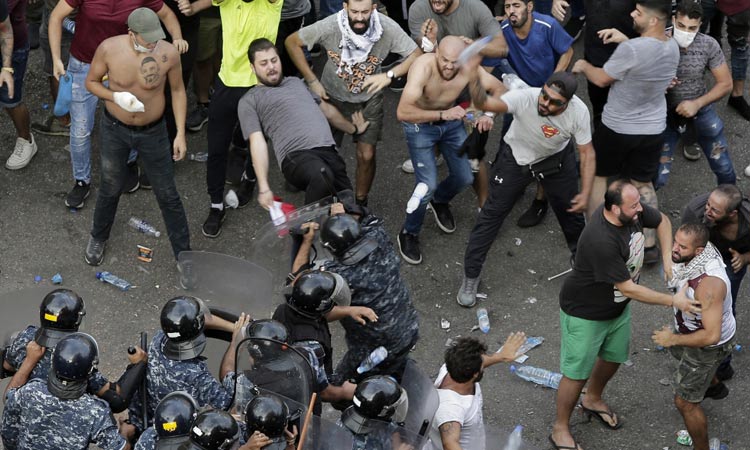 The UAE has warned its citizens in Lebanon to avoid protest areas in light of the current political situation in the country.

The UAE Embassy in Beirut said on its Twitter account, “The Embassy in Beirut warns the nationals in all Lebanese regions of the need to avoid the places of demonstrations, and stay in their residence to ensure their safety.

The embassy also said, “In view of the current situation, those who wish to travel through Beirut Rafic Hariri International Airport must go to the airport early to avoid roadblocks.”

Saudi Arabia's foreign ministry also told its citizens on Friday not to travel to Lebanon, according to state news agency (SPA), as Lebanese protests entered a second day calling for the removal of leaders they accuse of looting the economy. 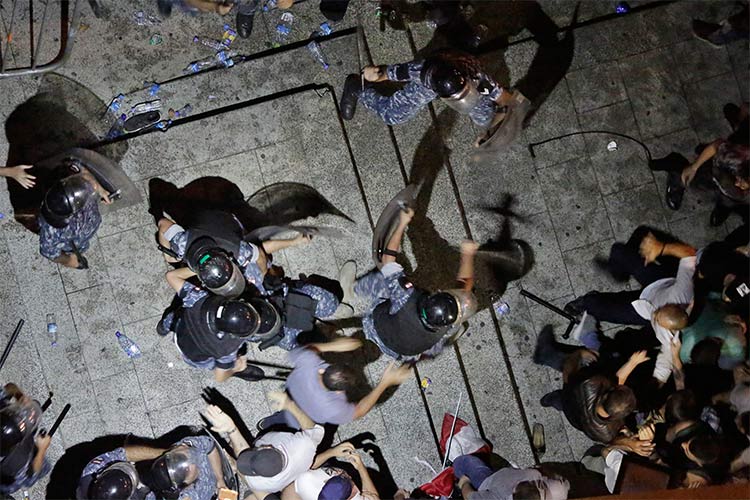 The Saudi foreign ministry advised its citizens in Lebanon to be extremely cautious and to call the Saudi embassy in Beirut when needed.

"I'm setting a very short deadline. Either our partners in the coalition government give a clear, decisive and final response to convince me, the Lebanese people and the international community... that everyone has decided on reforms, or I will have something else to say," he said, laying down a 72-hour deadline.

The Kuwait's Embassy in Lebanon on Friday asked citizens wishing to travel to Lebanon to wait because of the current protests and unrest.

"The embassy also calls on citizens currently in Lebanon to take utmost care and stay away from crowds and demonstrations," the Embassy said in its tweet.

"The embassy calls on all Egyptian citizens in Lebanon to avoid the areas of gatherings and protests, to be careful in their movements and to abide by the instructions of the Lebanese authorities in this regard," MENA said.

The street demonstrations began on Thursday evening and quickly escalated into some of the biggest protests in years.

They were sparked when government announced plans for new taxes on such items as voice calls made through messaging applications, including WhatsApp.

The protests could plunge Lebanon into a political crisis with unpredictable repercussions for the economy, which has been in steady decline.

Thousands of people of all ages, sects and political affiliations brought the capital Beirut to a standstill the following day and gatherings in other parts of the country.

Foreign Minister Gebran Bassil, one of the most polarising figures in Lebanon's leadership, made an address insisting that the government's resignation could lead to "something much worse than the current situation." 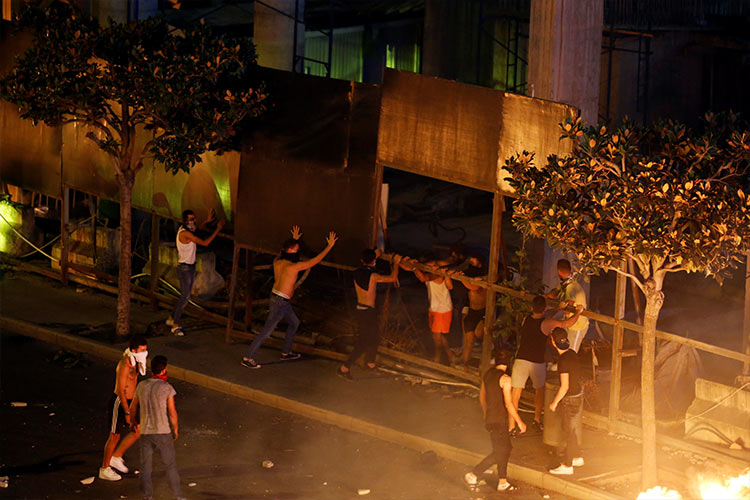 Demonstrators are seen during a protest over the deteriorating economic situation in Beirut. Reuters

Surrounded by smoke from burning tyres, protesters flew the Lebanese flag and chanted "the people demand the fall of the regime!" — a popular refrain from the Arab Spring uprisings of 2011.

Yara, a 23-year-old graduate, said she joined up because the protests were not sectarian.

"Today what matters is that all of the Lebanese people are protesting together."

Public anger has simmered since parliament passed an austerity budget in July to help trim a ballooning deficit.

Tempers boiled over on Thursday over plans to introduce a $0.20 tax on calls on messaging applications such as WhatsApp, which are widely used in Lebanon.

The government scrapped the proposal within hours but the demonstrations carried on into the early hours of Friday.

However, the promised austerity moves are reported to be essential if Lebanon is to unlock $11 billion in economic assistance pledged by international donors last year.

Security forces finally dispersed them shortly before dawn, firing volleys of tear gas and rubber bullets after they had tried to storm government headquarters.