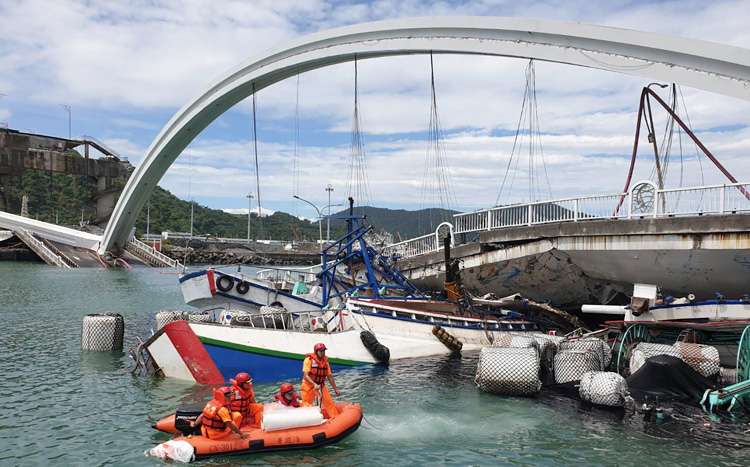 Rescuers work near the site of a collapsed bridge in Nanfangao, eastern Taiwan on Tuesday. Taiwan’s Coast Guard/ AP

A bridge collapsed in northeastern Taiwan on Tuesday injuring at least 14 people as it smashed down on to fishing vessels moored underneath and sent a petrol tanker plummeting into the water.

The petrol tanker can be seen almost making it across the bridge, which spanned a small fishing port.

In the images, the road gives way and tumbles down onto at least three fishing boats below as the petrol tanker follows.

The truck later burst into flames, sending a thick plume of black smoke into the air.

Coastguard officials said at least 14 people were injured. Local fire officials said the driver of the petrol tanker was among those taken to hospital.

President Tsai Ing-wen said a rescue operation had been launched to look for any more injured or missing people.

“We hope to safely rescue all in the shortest time to minimise the damages,” she told reporters.

The bridge was built in 1998 and the cause of the collapse is being investigated.

Taiwan was skirted by a typhoon on Monday night which brought heavy rains and strong winds to parts of the east coast.

But at the time of the bridge collapse the weather was fine. 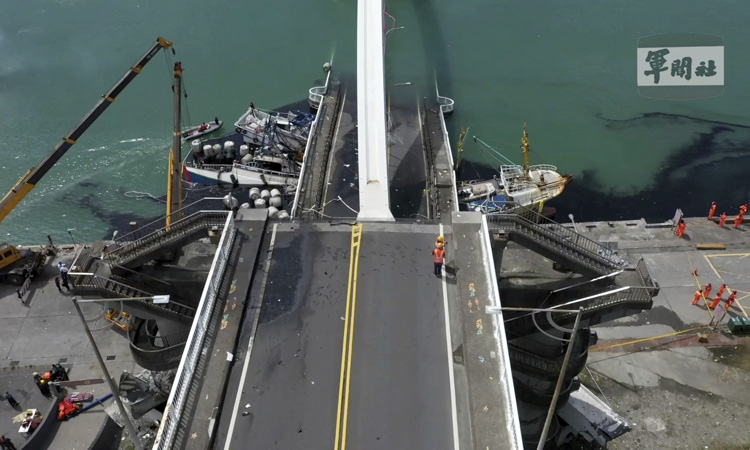 Taiwanese authorities say four bodies have been found and two people are missing after three fishing boats were hit by an oil tanker truck that fell off a collapsing bridge.