‘Save Hearts’ launched ahead of World Heart Day - GulfToday

‘Save Hearts’ launched ahead of World Heart Day 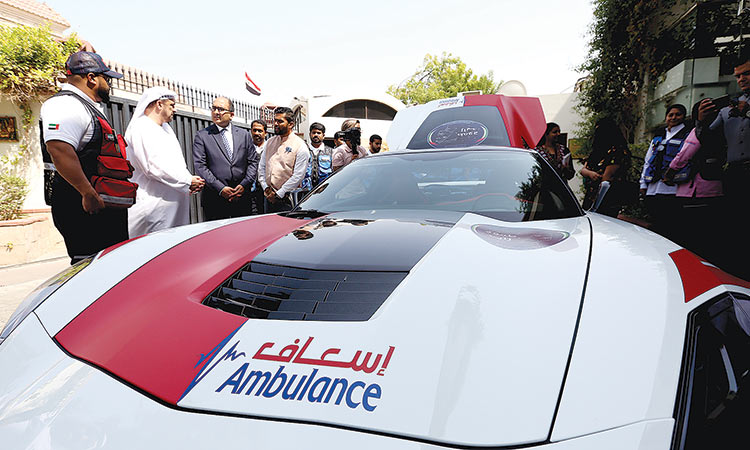 The best way for people to disentangle themselves from their unhealthy habits is to connect with the right individuals able to guide them expertly.

Ahead of the Sept. 29, 2019 “World Heart Day,” Zulekha Hospital-Nutrition & Lifestyle Management director Nafeesa Ahmed also said one of the causes that people fail to achieve the right mindset to pursue lifestyle modifications is the onslaught of information from numerous sources they consciously seek.

Ahmed was among the panellists at the Thursday formal launch of the Zulekha Hospital-Consulate General of India in Dubai-Dubai Corporation for Ambulance Services (DCAS) “Save Hearts” programme.

“People want to live healthy lives. They have the desire. But there is too much information from the media, the TV, the magazines and the Internet,” she said, when Gulf Today raised at the open forum the observation that amidst the never-ending advocacies public and private individuals have undertaken in at least the past decade to resolve health problems such as heart diseases and co-morbidities, challenges still abound.

Ahmed added: “They ask around (for what they should eat and not eat). But the best way is to talk with those who know. We should know what food is (and what it does to us).”

She cautioned on the continuing influx of the so-called best solutions against obesity and overweight such as the Keto Diet, claiming that a stop have been proved to result in weight gain.

Ahmed also said that while these diets may apparently help reduce weight, there may be underlying consequences leading to diseases which could have prevented in the first place.

Consultant Interventional Cardiology Dr Anil Bansil noted of a study released recently evidencing that Keto Diet is unhealthy because it is a “high meat diet” and consuming loads of meat is never good at all—even for the heart.

Vipul stressed these would focus on preventive measures to address recent records revealing that among the 30 to 60-year-old Indian workers in the UAE, 50 to 60 per cent have been found to be suffering from cardiovascular/heart problems, with 1,400 to 1,500 having passed away due to heart attack.

He termed the situation as “acute.”

Vipul said the compact easy-to-carry artificial defibrillator DCAS presented him with on Thursday is a big help in the health projects to be conducted in coordination with the various Indian organizations and entities.

He said the equipment would be useful considering that the consulate general attends to 300 to 400 clients a day.

The “Save Hearts” programme has been ongoing with DCAS in the forefront carrying out cardio-pulmonary resuscitation lectures and workshops because all three partner organisations believe everyone must know how to do the procedure to save more lives as cardiac heart arrest has become a principal cause of untimely death, even among the young.

DCAS chief executive officer Khalifa Hassan Aldrai said: “Individuals can run into emergencies at any point of time and we can save lives by being active first responders. Unfortunately, about half of the people who experience cardiac arrests at home do not get the help they need from bystanders before an ambulance arrives. This is why we have (this partnership). We encourage (everyone) to take time to learn the life-saving skill that can make a difference.”

Among the organisations that have benefitted from the programme were the Sharjah Civil Defence, Sharjah Police Headquarters, Burhani Masjid-Sharjah and Dubai, L&T Corp in Dubai Investments Park, Gurunanak Darbar Gurudwara in Dubai, Precision Products LLC, and Emaar.

Meanwhile, DCAS has plans to distribute 80 more artificial defibrillators across Dubai. It has so far given out over 22 to both public and private groups as part of its “Save My City” campaign.