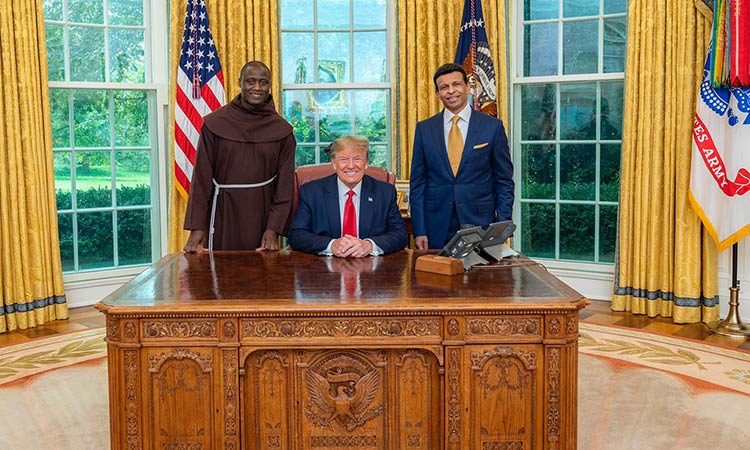 Peter Tabichi, a Kenyan science teacher and winner of the Varkey Foundation Global Teacher Prize 2019, started his whirlwind tour of the United States by meeting President Trump in the White House.

He also met with leaders of the World Bank and today he will be granted the honour of opening the United States Congress with a prayer. Later in the tour he will meet tech giants in Silicon Valley, including Google and Facebook, and then speak at the United Nations in New York as he asks for those in power to support science learning among young people in Africa.

During a tour that will see Peter meet with leading politicians, business leaders and philanthropists, he will set those in power a “science challenge” to help Africa’s youth solve the vast, urgent problems on their own doorstep: from climate change and drought to food insecurity and disease prevention. Peter will highlight that it is not only a moral duty but also in America’s self-interest to help Africa develop their science and technology base.

Peter Tabichi said: “The fates of America and Africa are entwined. The same global forces that have seen wildfires and extreme weather events ravage the US have brought droughts and crop failure to my own community, forcing my students to come to school hungry. Today’s African refugees from climate change, war and hardship will be tomorrow’s migrants on America’s doorstep. It is Africa that supplies the cobalt, mined at high human cost, that powers the smartphones that underpin US corporate connectivity.

It is not enough for western governments and companies to provide aid to alleviate the hardships faced in the Global South. They must also help Africa produce homegrown scientific talent who will come up with fresh solutions from fresh perspectives that can only be cultivated at the coalface.”

Tabichi leads by example by giving away 80% of his salary to the poor in his community and he was this year appointed the first Champion for Children in Conflicts and Crisis for Education Cannot Wait, the global fund for education in crisis. He is championing the cause of the 75 million children whose education is disrupted by conflicts and natural disasters and will be attending the 2019 United Nations General Assembly while in New York.

Tabichi will meet with Google and YouTube at the Googleplex and spoke to Facebook, Cisco, Quizlet and EdCast at their offices. He asked US tech giants to contribute where they can, from funding training for STEM teachers in Africa as well as scholarships for African students to study sciences at top global universities to launching programmes to encourage more African girls to take up STEM subjects and opening internships for African students in their own companies.

Sunny Varkey, Founder of the Varkey Foundation, said “Teachers hold the future of our world in their hands through the young minds they nurture. That’s why, through the Global Teacher Prize, we strive every day to shine a spotlight on teachers and their enormous power to transform lives”.

Vikas Pota, Chairman of the Varkey Foundation, said “Peter Tabichi’s call could not be more timely nor more vital as climate change and conflict force people from their homes and drought and food insecurity threaten lives and livelihoods. If young Africans are to tackle the urgent and existential challenges they will inherit, they will need the best education they can get.

“I urge political and business leaders in the US to answer Peter’s call and do everything they can to help teachers across Africa equip the next generation to change the world we’re leaving them for the better.”

Peter teaches at Keriko Mixed Day Secondary School in Pwani Village, situated in a remote, semi-arid part of Kenya’s Rift Valley. Here, students from a host of diverse cultures and religions learn in poorly equipped classrooms. Their lives can be tough in a region where drought and famine are frequent.  Ninety-five percent of pupils hail from poor families, almost a third are orphans or have only one parent, and many go without food at home. Drug abuse, teenage pregnancies, dropping out early from school, young marriages and suicide are common.

Turning lives around in a school with a student-teacher ratio of 58:1, is no easy task, not least when to reach the school, students must walk 7km along roads that become impassable in the rainy season.

Undeterred, Peter started a talent nurturing club and expanded the school’s Science Club, helping pupils design research projects of such quality that 60% now qualify for national competitions. Peter mentored his pupils through the Kenya Science and Engineering Fair 2018 – where students showcased a device they had invented to allow blind and deaf people to measure objects. His students, who had never stepped on a plane before, went on to win the UN Sustainable Development Goal Award at the Intel International Science and Engineering Fair (ISEF) in Phoenix, Arizona this year.

Despite teaching in a school with only one desktop computer with an intermittent internet connection, Peter uses ICT in 80% of his lessons to engage students, visiting internet cafes and caching online content to be used offline in class. 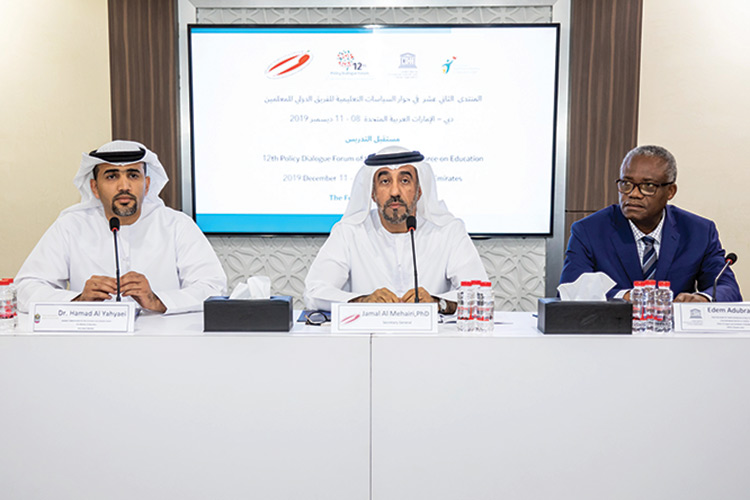 Over 300 education experts, including ministers of education, policy-makers, school leaders and teachers are going to attend the 4-day Policy Dialogue Forum on Teaching Policies and Practices in Dubai.

Sharjah Private Education Authority canceled any action taken by those schools in advance that contradicts its decisions, calling for returning the sums deducted from the teachers’ wages.