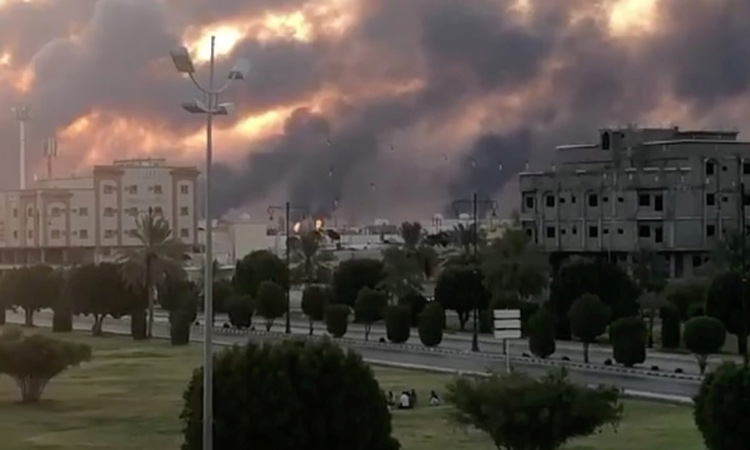 Smoke is seen following a fire at an Aramco factory in Abqaiq, Saudi Arabia, on Saturday. Reuters

According to Arab News website, one strike hit the oil company’s Abqaiq facility, which is near Dammam in Saudi Arabia’s Eastern Province, while another attack hit Khurais oil field, a ministry security spokesperson was reported by state news agency SPA as saying. 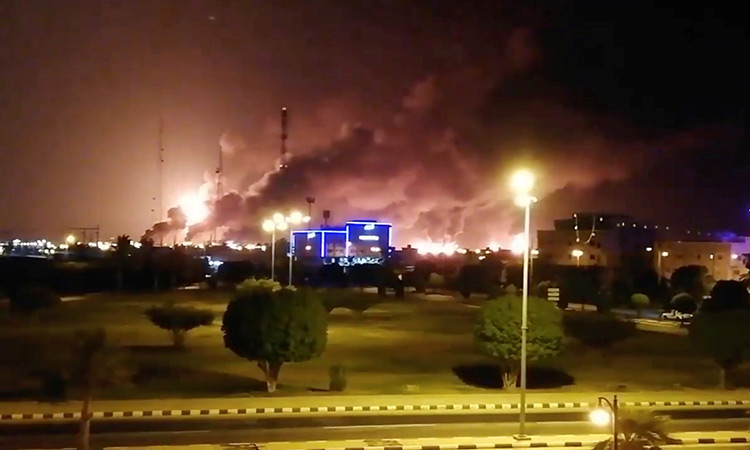 Smoke is seen following a fire at an Aramco factory in Abqaiq, Saudi Arabia. Reuters

Aramco’s industrial security teams have controlled the blazes and their spread in Aramco’s two facilities were limited, the ministry added, and further investigations are being undertaken regarding the incidents.

Online videos apparently shot in Buqyaq included the sound of gunfire in the background. Smoke rose over the skyline and glowing flames could be seen a distance away at the Abqaiq oil processing facility. The Saudi-owned satellite news channel Al-Arabiya later aired a segment with a correspondent there as smoke from the blazes clearly rose behind.

The fires began after the sites were "targeted by drones," the Interior Ministry said in a statement carried by the state-run Saudi Press Agency. It said an investigation into the attack was underway.

Saudi Aramco describes its Abqaiq oil processing facility in Buqyaq as "the largest crude oil stabilization plant in the world."

In a statement issued by Stephane Dujarric, Spokesperson for Guterres, he said that "the Secretary-General condemns Saturday’s attacks on Aramco oil facilities in the Eastern Province in the Kingdom of Saudi Arabia.