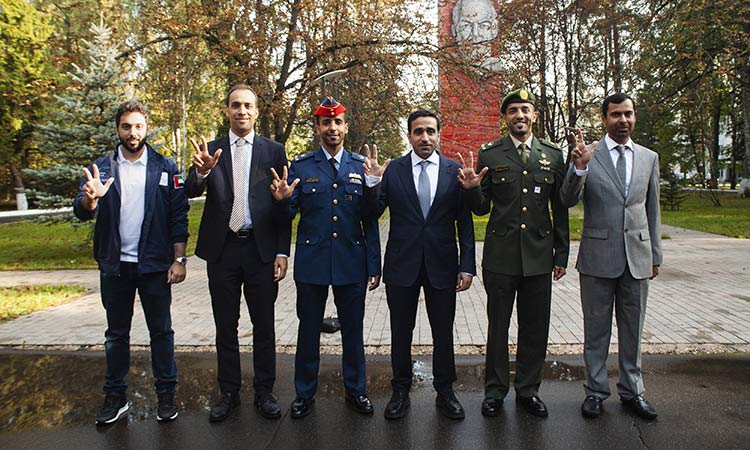 Sheikh Hamdan thanked the astronauts and support teams for their dedication and commitment during the entire project. WAM

Al Mansoori and Al Neyadi arrived in Baikonur, Kazakhstan, on Tuesday in preparation for the 15-day quarantine period, prior to the launch of the space mission to the ISS. During this time, the astronauts will be accompanied by the astronauts’ office manager Saeed Karmostaji and flight surgeon Dr. Hanan Al Suwaidi.

During the call, Sheikh Hamdan Bin Mohammed said that the UAE’s achievements contribute to enhancing the region’s ability to revive its culture and civilisation. Emiratis are pioneers in exploring new horizons for the region, including space exploration. President His Highness Sheikh Khalifa Bin Zayed Al Nahyan has directed the government to utilise Emirati talents and capabilities to strengthen the UAE’s efforts to shape the future, he added.

Sheikh Hamdan said the astronauts are the pride of the UAE and their efforts will help the country make a historic achievement in the space sector. “This historic voyage to the International Space Station will open the way for a new scientific revolution in the Arab world. The achievement will contribute to the vision of His Highness Sheikh Mohammed Bin Rashid Al Maktoum, Vice President and Prime Minister of the UAE and Ruler of Dubai, to revive the Arab world’s glorious civilisation.”

Sheikh Hamdan thanked the astronauts and support teams for their dedication and commitment during the entire project.

Emirati astronauts Hazzaa Al Mansoori and Sultan Al Neyadi bid farewell to the Russian capital, Moscow, after completing their training period at the Yuri Gagarin Cosmonaut Training Center in Star City. Both astronauts travel to Baikonur for a 15-day preparation ahead of the launch of their mission to the International Space Station (ISS) on Sept.25.

Hamad Obaid Al Mansoori said, “We are now at an important stage that reflects the efforts of the UAE’s wise leadership, and its people, in making this remarkable achievement for the country.

“We are truly proud of what we achieved. Today, Hazzaa Al Mansoori and Sultan Al Neyadi carry the ambitions of the late Sheikh Zayed Bin Sultan Al Nahyan, and renew their pledge to our wise leadership, to raise the UAE’s flag in space. I’d like to thank them for making us proud, and wish them all the best,” continued Al Mansoori.

Yousuf Hamad Al Shaibani said, “We are witnessing a historic event that reflects the UAE’s determination to engage the global scientific community in enriching humanity with new results from scientific experiments, which contribute to the improvement of human life.

“After the successful completion of the training and tests at the Yuri Gagarin Cosmonaut Training Centre in Moscow, we are fully confident and prepared to travel for our first mission to the ISS,” continued Al Shaibani.

During the 15-day quarantine period, the Russian Federal Medical-Biological Agency (FBMA) is fully responsible for the health of Al Mansoori and Al Neyadi, and will be working to protect the astronauts from illnesses and prevent them from spreading to the ISS.

The FBMA is responsible for preventing germs from entering their ground and space facilities, in addition to implementing a comprehensive sterilisation against microbes. The facilities and tools they use are subject to frequent sterilisation, including accommodation, buses and training sites.

Experts at FBMA are constantly taking laboratory samples from various facilities and tools to verify the presence of germs and prevent them from moving to the spacecraft, the ISS and space in general.