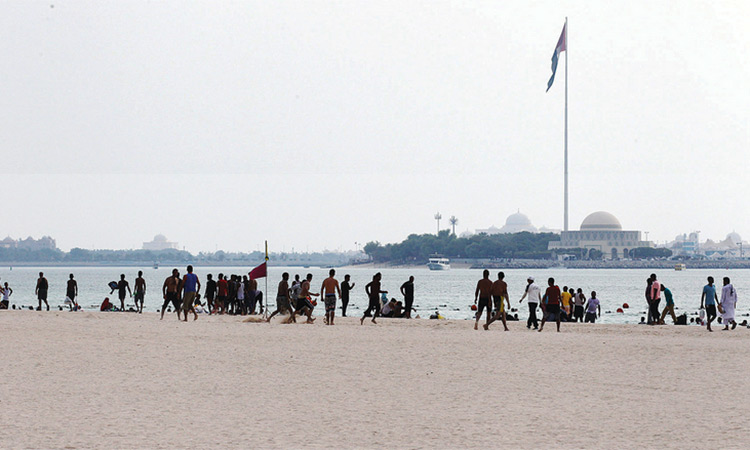 People chill out at a beach.

The Abu Dhabi Municipality (ADM) has announced the extension of swimming time in the emirate’s beaches starting from Sunday (September 1, 2019).  This decision has come in response to the desires of the visitors.

The new swimming dates in the beaches of the Corniche and Al Bateen, as well as Al Hudairat Island Beach will be from 6 am until sunset, and in the Ladies Beach in Al Bateen from 7 am until sunset.

ADM stressed that Abu Dhabi’s beaches have received great attention within the Emirate’s strategy of developing public and tourist facilities as they play an important role in attracting tourists and beach goers.

The Municipality said that it has provided the beaches with many services, such as water games, the central alert system for beachgoers, security and rescue services, cleaning service, floating carts for people of determination, sports yards, running track and cycling track at Al Hudairat Beach, children’s play areas, first aid clinic, men’s and women’s prayer rooms, restaurants, kiosks, F&B carts, sun loungers and parasols, corridors for the people of determination in the Corniche Beach and Al Bateen Beach, and a free bus on the Corniche Beach.

In order to ensure safety and security standards, as well as the best recreational environment for beachgoers, the Municipality pointed out that it conducts daily, weekly and monthly inspection programme by the Beach Administration, train security guards, in addition to training rescuers to maintain their fitness, which is reflected positively in the accident reports of the beach.

The inspection is carried out by the Inspection and Control Department and the Environment, Health and Safety Department, in order to continuously improve the services of the beach and meet the requirements of its customers, especially as Abu Dhabi beaches are certified by Blue Flag which is the highest security and safety standards for beaches.

This year, the Corniche Beach - public, Corniche Beach - Coast, Corniche Beach - Phase II, and Al Bateen Beach – public have been rated with the Blue Flag, which confirms that Abu Dhabi is pursuing a successful development approach, making it one of the most beautiful international destinations and the world’s most cosmopolitan cities that has recreational facilities and world-class beaches.

Recently, the Abu Dhabi Municipality carried out a number of projects aimed at maintenance of sidewalks, dirt areas, infrastructure, rainwater drainage facilities and lighting poles during the past eight months at an estimated cost of Dhs70.7 million.

The rainwater drainage networks have been maintained at a cost of Dhs16.330 million, while lighting poles’ maintenance cost reached Dhs15 million, and Dhs1.171 million for the rehabilitation of a garden and the entrance of a shopping center. The move aimed to preserve the infrastructure and the public safety for road users and to maintain aesthetics in general.