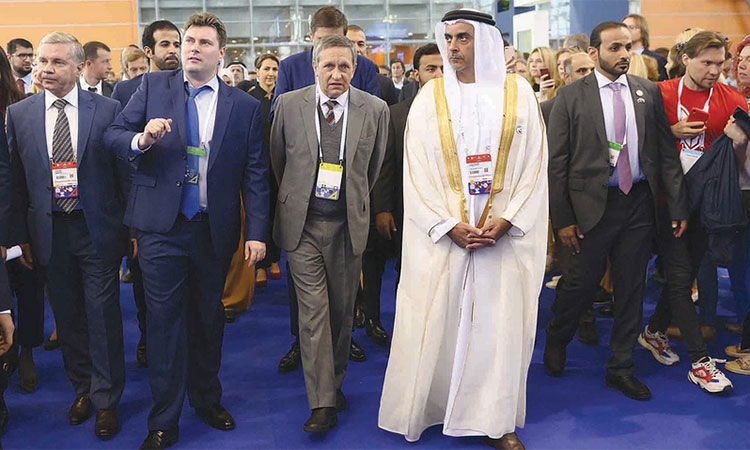 Saif Bin Zayed during the inauguration of the 3rd edition of Akdar World Summit in Moscow. WAM

Al Tayer highlighted Dewa’s latest projects and innovative initiatives, the most prominent of which is the Mohammed bin Rashid Al Maktoum Solar Park, which will produce 5,000 megawatts (MW) by 2030. This includes 4,000MW from photovoltaic solar panels and 1,000MW from Concentrated Solar Power (CSP), with investments totalling Dhs50 billion. Upon completion, the solar park will reduce over 6.5 million tonnes of carbon dioxide emissions annually.

Dewa as Platinum Sponsor for Aqdar World Summit current edition also displayed projects and initiatives including  the World Green Economy Organization (WGEO) which  works to enhance the transition to a green economy and the dissemination of green economy projects at a global level, as well as support countries and organizations seeking to achieve their strategies and green plans.

Dewa displayed its smart initiatives to make Dubai the smartest and happiest city in the world, including the Shams Dubai initiative to install photovoltaic solar panels on rooftops to produce electricity from solar power and connect the systems to Dewa’s grids; and the Green Charger initiative to build the infrastructure for electric vehicle charging stations.

Al Tayer noted that taking part in the Aqdar World Summit has been very important for Dewa. The Summit has provided a global platform to share experiences and best practices while also exploring investment opportunities in the clean energy sector.

He noted that Dewa’s participation highlights the UAE’s development of the global energy sector, as well as consolidating its position among top countries in supporting green economy and sustainable development of its environment, society, and economy. The UAE continues its ongoing efforts to achieve the vision of the wise leadership and the objectives of the UAE Centennial 2071 to make the UAE the best country in the world, promoting sustainable development.

The 3rd Aqdar World Summit’s theme is ‘Global Empowerment of Communities: Experiences and Lessons Learned.’ It is held in conjunction with Moscow Global Forum City for Education, which brings together leading academics and researchers to share scientific and cultural experiences and present new developments and latest technologies in education and training.

Dewa’s stand welcomed a large number of visitors, experts, specialists, and energy companies participating in the event, as well as many VIPs, decision-makers, and officials from the energy sector in the region and the world. The stand also attracted international and diplomatic delegations looking at different ways to enhance cooperation, exchange experiences with Dewa, and viewing its success story and latest projects.

Held under the theme, ‘Global Empowerment of Communities: Experiences and Lessons Learned’, the Summit aims to build empowered communities able to face challenges to achieve global peace and security.