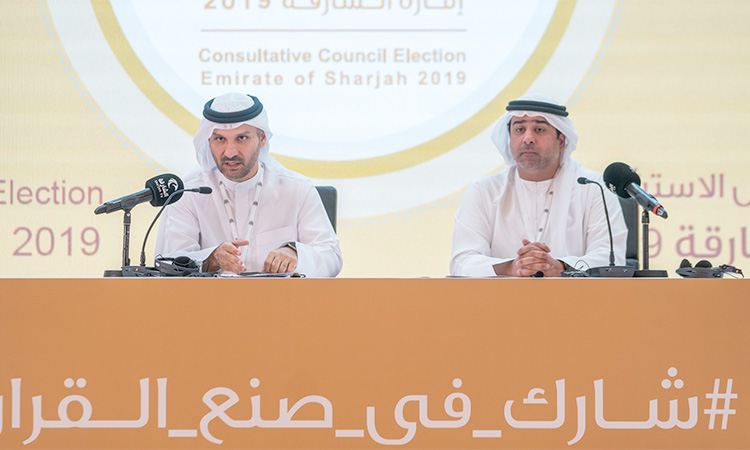 The second historic elections for 25 seats of the Sharjah Consultative Council (SCC) will begin on Sept.1 with registration for the Electoral College membership and conclude on Dec.11 with announcement of the winners.

Addressing a press conference in Sharjah on Sunday, Chairman of the Higher Committee for the SCC Elections Dr Mansour Bin Nassar said that elections will be held for 25 seats from nine constituencies, while the remaining 25 members of the SCC will be nominated.

This will be the 10th term of Sharjah Consultative Council.

On Oct.30, the Higher Committee will respond to the objections, if any. The final list of candidates will be announced on Oct.31.

The candidates will have a period of 14 days, from Nov.1-14, for campaigning.

Candidates who wish to withdraw their names can do so on Nov.7. Those remaining in the fray would have to submit the names of their polling agents on the same day.

Speaking about preparation for the upcoming SCC elections, Dr Mansour Bin Nassar stressed that the Higher Committee for the SCC Elections is sparing no effort to strengthen the parliamentary process in the emirate and involve the citizens in the decision-making process.

He underscored the importance of people’s participation in this celebration of electoral process, which offers the Emirate an opportunity to bring in change by listening to the citizen.

Stressing on the importance of public participation in the parliamentary process and the power of people’s votes to shape change, he said that the half of the members of the SCC who are being directly elected would act as the voice of the public and the link between the people and decision-makers.

Member of the Supreme Committee and Secretary General of the SCC Ahmed Saeed Al Jarwan lauded the performance of the Council saying it has emerged as a strong bridge between the citizen and government administration in the Emirate.

He said that the Higher Committee is sparing no effort to ensure the second SCC elections are free, fair and transparent. He also made a presentation on the occasion explaining the method of running for the SCC elections by downloading the SCC Elections application for smartphones.

Outlining requirements for contesting the elections, the officials said that the candidates should be 25-year-old and must possess a clean legal record.

Responding to questions about timing of the SC elections, the officials stressed that despite taking place during the same period when FNC elections are being held, the SCC elections will be a smooth process as arrangements have been made to avoid any overlapping.

Unlike the Federal National Council (FNC), there will not be reserved seats for women. However, they expressed hope that there will be strong representation from women in the next term of the SCC.

On this occasion, a video documentary on the first SCC elections was also presented, along with an explanatory video on the new electronic services for the elections.

The participation rate in the first SCC elections touched 67 per cent with the number of Electoral College members crossing 24,952 voters. Around 16,696 voters voted to elect 21 winners from amongst 195 candidates. The stunning performance of the Bharatiya Janata Party (BJP) and its allies in the parliamentary elections in India surprised Indian expatriates across the UAE. While the opponents of Prime Minister Narendra Modi-led National Democratic Alliance (NDA) were expecting a favourable result with the help of regional parties, the landslide victory to BJP and its partners pleasantly surprised Modi’s supporters in the UAE.