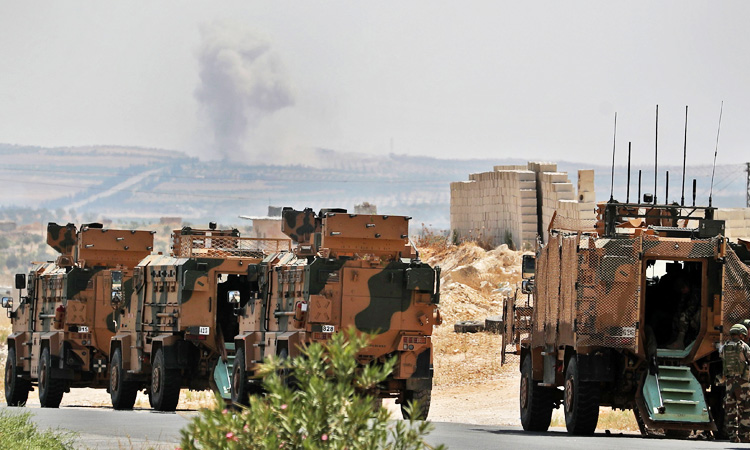 A convoy of Turkish military vehicles is pictured near the town of Maar Hitat. Omar Haj Kadour/AFP

A Turkish military convoy crossed into extremist-run northwest Syria on Monday, its path blocked by advancing regime troops as tensions soared between Damascus and Ankara.

Rebel-backer Turkey said its forces were targeted by an air strike, while the Syrian regime accused Turkish forces of backing “terrorists.” 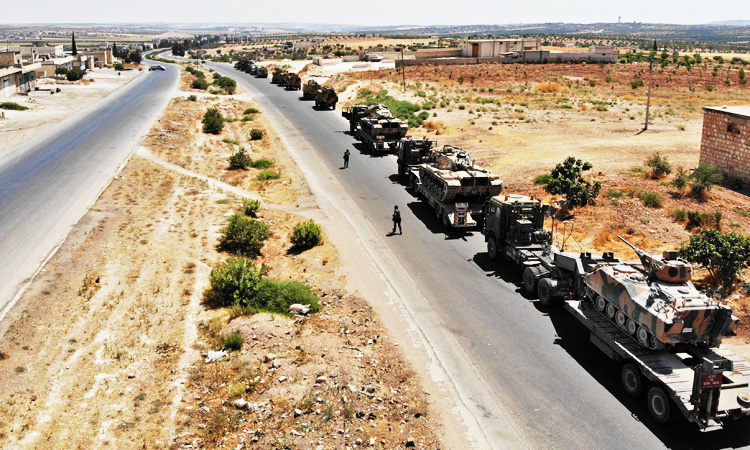 A convoy of Turkish military vehicles is pictured near the town of Maar Hitat in northern Syria's Idlib province. Omar Haj Kadour/AFP

The convoy had entered Idlib province before heading towards a key town where Russian-backed regime forces are waging a fierce battle to retake the area from extremists and rebels.

Turkey claimed an air strike hit its convoy, killing three civilians, though a war monitor said a Russian air raid took the lives of three rebels in the surrounding area.

Russian President Vladimir Putin said on Monday that Moscow supports the Syrian army’s offensive against “terrorists” in the northern province of Idlib, during a press conference with French President Emmanuel Macron. 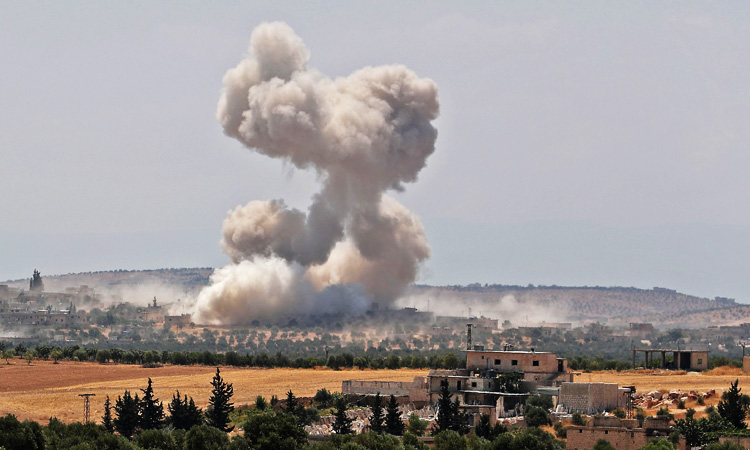 Smoke billows above buildings during a reported air strike by pro-regime forces on the town of Hish in Syria's Idlib province.

“We support the efforts of the Syrian army... to end these terrorist threats” in Idlib, Putin said after Macron urged respect for a ceasefire in Idlib.

After eight years of civil war, the extremist-run region on the border with Turkey is the last major stronghold of opposition to President Bashar Al Assad’s regime.

The region of some three million people was supposed to be protected by a Turkish-Russian buffer zone deal signed last year, but regime and Russian forces have upped their deadly bombardment there since late April.

After days of inching forward, Russian-backed regime ground forces on Sunday entered the key town of Khan Sheikhun in the south of the stronghold. 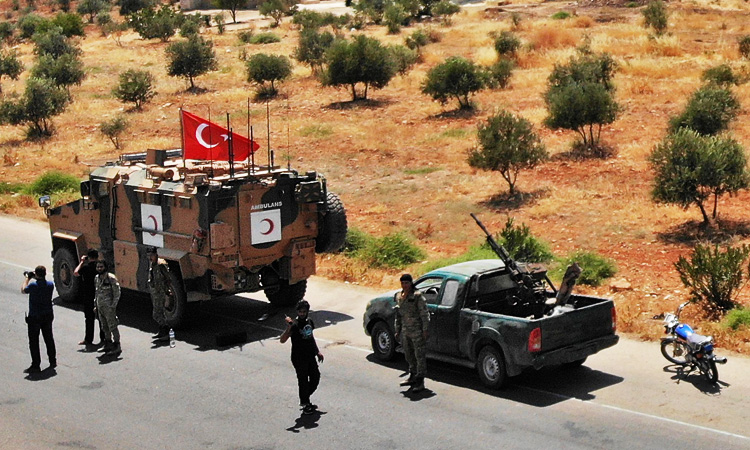 Turkish military vehicles are seen near the town of Maar Hitat on Monday.

The Syrian Observatory for Human Rights, a Britain-based monitor with a network of contacts in Syria, said this would stop the convoy ever reaching a Turkish monitoring post south of Khan Sheikhun.

Late Monday, the Observatory said the convoy was at a standstill in the village of Maar Hattat on the highway just north of Khan Sheikhun, where an AFP correspondent had seen it in the afternoon.

Analysts say regime forces want to retake the key road that connects Damascus with the northern city of Aleppo, both of which they control.

Earlier, an AFP correspondent saw a military convoy of around 50 armoured vehicles including personnel carriers and at least five tanks travelling southwards along the highway.

Turkey’s defence ministry “strongly” condemned the attack, saying regime operations were “in violation of the existing memorandums and agreements with the Russian Federation.”

The Damascus regime meanwhile denounced the convoy’s crossing from Turkey.

“Turkish vehicles loaded with munitions... are heading towards Khan Sheikhun to help the terrorists,” a foreign ministry source said, using the regime’s blanket term for rebels and extremists.

This confirmed “the support provided by the Turkish regime to terrorist groups,” state news agency SANA reported the source as saying.

The strike killed a Turkish-backed fighter from the Faylaq Al Sham group and two other opposition fighters, it said.

After the convoy entered the town, Russian and Syrian warplanes targeted the area in an apparent “attempt to prevent the convoy from advancing,” Observatory chief Rami Abdel Rahman said.

Fighting continues to the east and west of the town, according to the Observatory.

The seizure of Khan Sheikhun and territory further east would encircle a patch of countryside to its south, including the town of Morek where a Turkish observation post is situated.

The Turkish army earlier said the convoy was heading towards Morek.

Analyst Nawar Oliver said Turkey had likely sent the convoy to avoid its troops being “threatened” or placed “at the mercy of the regime and Russia.”

It may have also taken a “decision to protect Khan Sheikhun,” he said.

Since late April, the regime and Russia have upped their bombardment of the Idlib region, killing more than 860 civilians.

More than 400,000 people have fled their homes, the United Nations says.

Syria’s war has killed more than 370,000 people and displaced millions since it started in 2011.