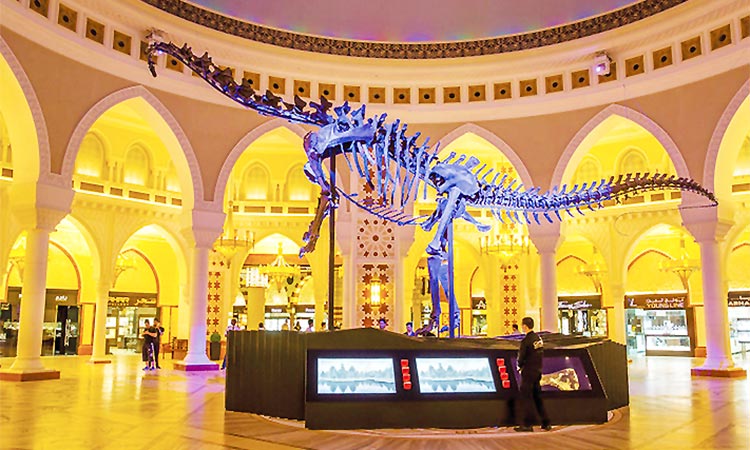 The auction will end on Aug.25. WAM

A massive 155-million-year-old dinosaur skeleton will be up for grabs for lovers of rare collectibles as Emirates Auction announced it will organise the Middle East’s first auction to sell the giant dinosaur skeleton.

The online auction will be staged by Emirates Auction, the leading company in the field of auctions in the Middle East which specialises in organising and managing public and electronic auctions, at a starting value of Dhs14.6 million and will end on Aug.25.

The 24.4-metre-long by 7-metre-high skeleton, which dates back to the Jurassic period, is the first of its kind in the world to be installed at the Dubai Mall. Back then the 25-year-old dinosaur weighed up to five elephants and was one of the long-necked herbivorous dinosaurs and has a tail tapering to a long, thin whip-like end to defend itself against predators.

The dinosaur belongs to the Diplodocus longus variety, deriving it from the Greek words “diplos,” meaning “double,” and “dokos” meaning “beam.”

Interestingly, the displayed bones belonging to the same auctioned animal, which makes it exceptionally special.

In addition, nearly 90 per cent of the fossil’s bones are original, making it a stunning discovery in the history of palaeontology.

The remains of the adult dinosaur were discovered in a sleeping position in 2008 at the Dana Quarry in the US state of Wyoming.

The auction will be an ideal opportunity for those looking for excellence to supplement their collections with a historic masterpiece rarely found around the world.

The specimen was previously displayed at the Houston Museum of Natural Science in the US state of Texas.

It was sourced through Khalid Seddiq, founder of Etihad Modern Art Gallery in Abu Dhabi and was put on permanent display at The Dubai Mall in 2014.

Last year at the Sharjah Children’s Reading Festival (SCRF) the age of the dinosaurs was brought back to life during the “Dinosaur Quest of Dr T-Rex” show.

The children expressed their delight as they saw Velociraptors and Brachiosaurs on stage during the 30-minute show, which featured a joke-telling baby dinosaur, as well as a dig to find ancient fossils.

The audience was led through their journey back in time by Dr T-Rex. “Dinosaurs have been alive for decades in our imaginations, and most people do not understand this, except children,” he said.

With the help of young volunteers from the audience, Dr T-Rex dug up a dinosaur egg that hatched to reveal a wisecracking baby dinosaur, who entertained the crowd with jokes.

As they continued to dig, they discovered a Velociraptor claw and a Tyrannosaurus tooth, and they were taught the differences between meat and plant-eating dinosaurs.

The children also learnt that scientists believe that the dinosaurs became extinct when an asteroid collided with Earth, causing volcanic eruptions and blocking the sun, which resulted in the death of plants in a matter of months. The show was held on selected days at various times during the tenth edition of the festival, which is themed, “Your Future, Just a Book Away.”

SCRF 2018 also featured a series of international theatrical performances that include “Tuta and Monkey Cheetah” and the “Island of Kids Area,” which combine education, fun and entertainment, to promote the values of honesty among its young visitors.

In 2017, fossils found in 72-million-year-old sedimentary layers in Mukawa, a town in the northernmost prefecture of Hokkaido, were confirmed as the largest complete dinosaur skeleton discovered in Japan, researchers have said.

The herbivorous dinosaur, a member of the Hadrosaurid family, is believed to have been 8 metres long and weighed 7 tonnes, Hokkaido University Museum Associate Prof. Yoshitsugu Kobayashi was quoted by Jiji Press as saying.

“Large dinosaur fossils tend to be exposed to wind and rain, which cause bones to deteriorate. Therefore it is rare for a complete skeleton to survive,” said Kobayashi, who is studying the fossils together with the Hobetsu Museum.