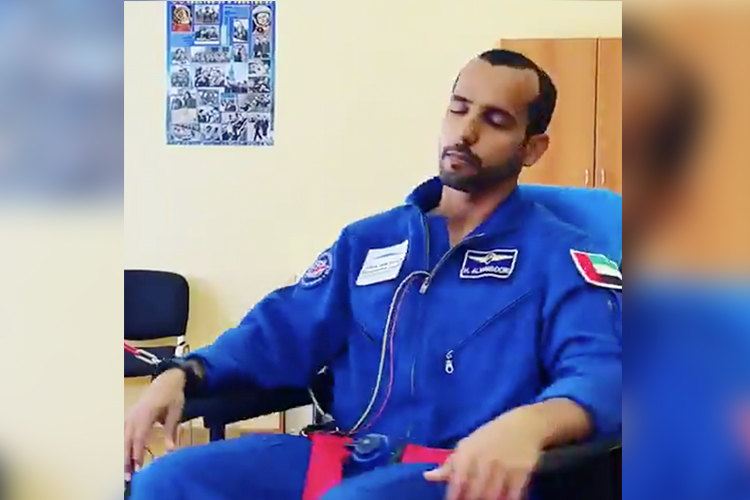 Hazza Al Mansouri during his training.

Emirati astronaut Hazza Al Mansouri spend 10 minutes on the revolving chair, which works to stimulate the balance device in the inner ear to reduce the side effects on the human body due to the lack of gravity in space.

Emirati astronauts, Hazzaa Al Mansoori and Sultan Al Neyadi began a training programme at NASA's Lyndon B. Johnson Space Centre, JSC, as part of the preparations for the first Emirati astronaut to travel to the International Space Station (ISS), aboard the Russian Soyuz-MS 15.

NASA held a press conference for the mission's main crew, which is set to travel to the ISS on 25th September, 2019, and comprises flight leader, Cosmonaut Oleg Scripochka, and NASA Astronaut, Jessica Meir.

The Mohammed Bin Rashid Space Centre (MBRSC), has announced that Hazzaa AlMansoori, the UAE’s first astronaut to travel to the ISS, on 25th September, will host a traditional Emirati food night at the station.

AlMansoori will be dressed in the traditional Emirati clothes, and will offer his fellow astronauts three Emirati foods - 'madrooba', 'saloona', and 'balaleet'. The event will be the first of its kind, and for the first time they would taste the Arabian and Gulf inspired cuisine in a non-gravitational environment.

AlMansoori, the UAE's main astronaut travelling to the ISS, and Sultan AlNeyadi, the UAE’s back-up astronaut, spent one to two hours daily for a week to taste about 200 different types of halal food and evaluate each. The Russian Space Food Laboratory company is responsible for preparing these meals for space.

"The astronaut’s meals are prepared according to specific requirements to provide a balanced nutrition while ensuring that they are easy to carry, store, and use in a non-gravitational environment. These foods are processed at high temperatures to be stored for long periods. During the training period, we evaluated about 200 different types of halal food on a scale of one to nine from most to least favourite. We enjoyed our experience in tasting Emirati foods prepared for space, but the taste of the food prepared for space varies compared to the food we eat on earth," said AlMansoori.

"I’m honoured to be the first astronaut to host an Emirati night on board the ISS to promote the Emirati culture, which I am proud to belong to, and share some delicious Emirati food like madrooba, saloona, and balaleet, which I’m sure they will like," added AlMansoori.

AlNeyadi highlighted that the menu on the ISS includes appetisers such as soups and cheese, and the main course includes fish, chicken or beef, in addition to desserts and drinks such as tea and juices. He noted that their training at the Yuri Gagarin Cosmonaut Training Centre in Star City in Russia, included tasting 20 to 30 types of space food daily for an entire week. Meals prepared for space are usually placed in the form of paste in tubes, which should be directly consumed and cannot be heated, or in the form of canned food containing food in a solid or dried form, where water can be added to it and it can be heated in special equipment for five to seven minutes.

The scientific mission includes experiments involving schools in the UAE as part of the ‘Science in Space’ initiative of Mohammed Bin Rashid Space Centre (MBRSC).