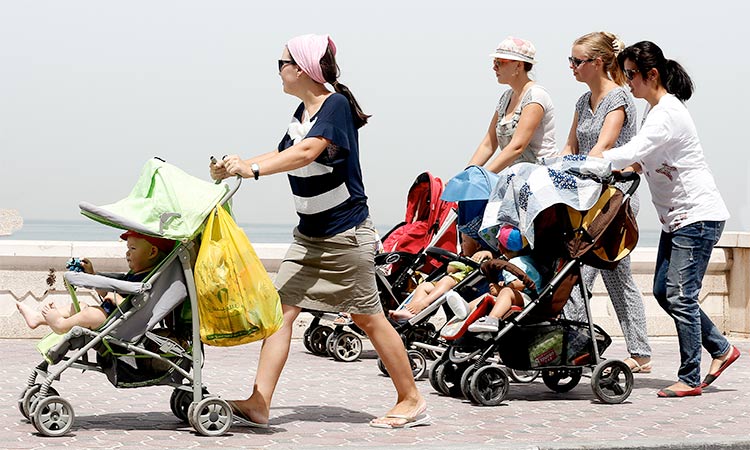 A group of young mothers carry their babies in trolleys as they take a walk. Kamal Kassim, Gulf Today

As mother’s milk is the first best source of complete food for newborns, breastfeeding is not only beneficial for them but a plus as well for nursing mothers, specifically to those suffering from diabetes or have developed the disease on the second half of pregnancy, otherwise known as gestational diabetes (GDM).

Consultant paediatric diabetologist Dr Amani Osman explained so to Gulf Today, as ongoing until Aug 7 is the “World Breastfeeding Week.”

Mother-and-child bonding, though it starts from the womb is crucial within the first few hours of birth, according to experts and the World Health Organisation (WHO).

Osman of the Imperial College of London Diabetes Centre in Abu Dhabi said that on the global scale, GDM is common at one in 25 pregnancies, and one in four pregnancies both in the UAE and Saudi Arabia, according to records.

She said it is safe for diabetic women to get impregnated, “However, it is very important that they consult their doctors to determine the steps they should take in order to control their  diabetes during pregnancy and to lessen the health risks for them and their babies. They must ensure they are  following a healthy diet and a proper work-out plan, in addition to continuously monitoring their blood glucose level and taking insulin therapy as needed.”

Osman pointed out that while obesity and overweight, poor lifestyle orientations and unhealthy eating habits, previous GDM experiences, and pregnancies at over age 30 are factors to GDM while “some are more predisposed than others” due to genetics, “it is very important for women to understand the importance of a healthy diet in maintaining a weight in normal range both before and during pregnancy.”

According to Osman, once birthed, the newborn of a diabetic mother may suffer from hypoglycaemia—the condition whereby the newborn suffers from low blood glucose levels—a big possibility when his mother during pregnancy suffered from poor blood glucose control.

“The extra insulin the baby produced in response to the mother’s high glucose levels during pregnancy will drop after birth. So early and frequent breastfeeding within the first few hours of delivery can help stabilize the blood sugar.”

On how breastfeeding can help diabetic women improve their condition, Osman cited the oxytocin hormone, released from the brain once breastfeeding starts.

The release of oxytocin “improves glucose metabolism, insulin insensitivity and burning calories in mothers, in addition to helping them lose weight gained during pregnancy.”

“This is possible because the fat cells stored in the body during pregnancy help fuel milk production,” Osman added.

Saying that oxytocin alongside the release of the prolactin hormone at breastfeeding, “helps reduce maternal response to stress,” Osman also said that oxytocin also protects the mother from post-partum depression, “supports better family planning because it suppresses a woman’s fertility immediately after birth as the longer nursing mothers breastfeed, the longer the period of anovulation (no release of eggs) is.”

The other benefits of breastfeeding on the mothers include protection against the cancers of the breast, ovaries and endometrium; against rheumatoid arthritis, cardiovascular diseases, and Type 2 Diabetes.

Simply put, nursing mothers or mothers who have breastfed have more time to spend with their child/children and succor them well—because breastfeeding guarantees their health.

On the question on whether the medications of diabetic nursing mums affect the health of their breastfed babies, Osman said: “Any medication that was fine to take during pregnancy will be fine during nursing.”

One example are the insulin molecules: “These are too large to pass into the mother’s milk and even if there was any insulin in the milk, it would be destroyed in the infant’s stomach. This  makes insulin therapy compatible with breastfeeding.”

However, Osman said that best for diabetic mothers to consult their doctors “to determine whether their medication needs to be adjusted as breastfeeding can lower the mother’s blood glucose up to 25 per cent.”