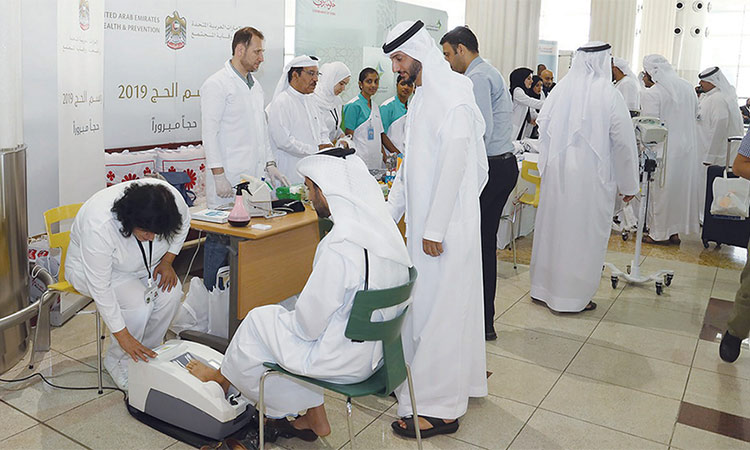 During a medical examination session by MoHAP.

The last batch of Yemeni Hajj pilgrims left for Saudi Arabia on Thursday onboard an Emirati aircraft, under a grant by His Highness Sheikh Mohamed bin Zayed Al Nahyan, Crown Prince of Abu Dhabi and Deputy Supreme Commander of the UAE Armed Forces.


This is the fourth year His Highness Sheikh Mohamed bin Zayed’s pilgrimage grant is offered to families of the Yemeni martyrs.

The pilgrims expressed happiness on being able to undertake the Hajj pilgrimage and thanked and appreciated the support of the UAE’s leadership, government and people.

Meanwhile, Sheikh Shakboot bin Nahyan Al Nahyan, the UAE Ambassador to Saudi Arabia, has lauded Kingdom’s efforts in providing best services and facilities to pilgrims enabling them to perform their Hajj rituals with ease and tranquilly.

He added that the UAE Embassy and the Consulate-General are working in coordination with the country’s official Hajj mission to implement the leadership directives in providing UAE pilgrims with all means of comfort during their Hajj rituals.  The UAE Ambassador thanked the Custodian of the Two Holy Mosques King Salman bin Abdulaziz Al Saud of Saudi Arabia, and Prince Mohammed bin Salman bin Abdulaziz Al Saud, Crown Prince, Deputy Prime Minister and Minister of Defence of Saudi Arabia, for their efforts to facilitate the Hajj rituals.

The Ministry of Health and Prevention, MoHAP, has announced the departure of the medical mission to Saudi Arabia to accompany the UAE’s official hajj mission.

The medical mission consists of 70 personnel that includes doctors, nurses, and administrators. It will provide all healthcare services and offer preventive and medical advice to pilgrims.

The medical staff comprises specialised competencies which have been trained to provide medical and emergency services and to follow-up with patients with chronic diseases such as hypertension, diabetes, and of the heart, as well as to provide them with the adequate quantities of medicines, he stated.

Al Zarouni also referred to the adoption of a sophisticated electronic system that enhances health services for pilgrims and a database on them that facilitates the medical team’s job to intervene quickly in case of emergencies, and the preparation of daily medical reports on the health status of each pilgrim.

Badr Ahmed Al-Najjar, Rapporteur of the Hajj Medical Mission said that various educational programmes were organised for pilgrims in terms of potential health problems and risks, whether before, during or after Hajj.

In addition to providing health assistance to pilgrims at airports, there were in-kind gifts such as sunscreen creams, umbrella, a fanny pack to fix the water bottle and various tools needed by the pilgrim, a cooler bag for medicines and injections, and a first aid bag.

Two lectures were held in Dubai and Sharjah to increase the health awareness of pilgrims, Al-Najjar added. The Hajj Medical Committee’s services included providing free check-ups such as blood pressure, diabetes and health education through leaflets and brochures on Hajj procedures.

A special card has been provided that includes the addresses, numbers, and names of those responsible for the medical mission in Makkah and Medina of the UAE’s hajj official mission, to communicate in case of emergencies, he pointed out.