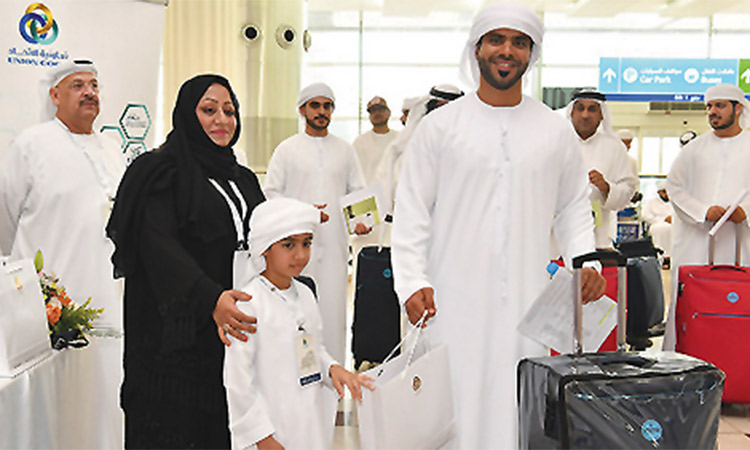 A family of pilgrims with their gift bag at the Dubai Airport.

As many as 1,000 Hajj pilgrims from Dubai have received gift bags consisting of a number of travel essentials. The gift bags initiative was launched by the Union Coop – The largest Consumer Cooperative in the UAE which distributed 1000 gift packs consisting of travel essentials to people performing the Hajj pilgrimage to the Holy City of Mecca, Kingdom of Saudi Arabia

The retailer has distributed 1000 gift packs to people performing the Hajj pilgrimage, at Dubai International Airport, Terminal – 3 for the fourth consecutive year. This initiative comes as a service to the community and contributes to the promotion of good values among its members and the promotion of cohesion and interdependence while instilling positive customs and traditions.

Explaining Union Coop’s commitment towards such initiatives every year, Huda Salem Saif, Communication and Social Service Section Manager, Union Coop said, “Union Coop team have started distributing gift packages to pilgrims that consists of personal care supplies, as well as tools to protect them from the harsh heat. Union Coop has always contributed to the consolidation of social, charitable and humanitarian principles and concepts, which focuses on strengthening relationships with strategic partners in the field of community work. We pray the pilgrims to have a safe and rewarding trip.”

Recently, Etisalat announced the launch of a new roaming pack for customers travelling to Saudi Arabia for Hajj and Umrah. The offer provides enhanced data and voice allowances and a 14-day validity that allows them to stay connected with family and friends back home.

From 21st July to 19th Aug, customers can enjoy 10GB data and 1,000 minutes (to make and receive voice calls) valid for 14 days for only AED150. With more data and minutes and a 14-day validity, the pack gives customers peace of mind and more flexibility to use the services for the duration of their pilgrimage.