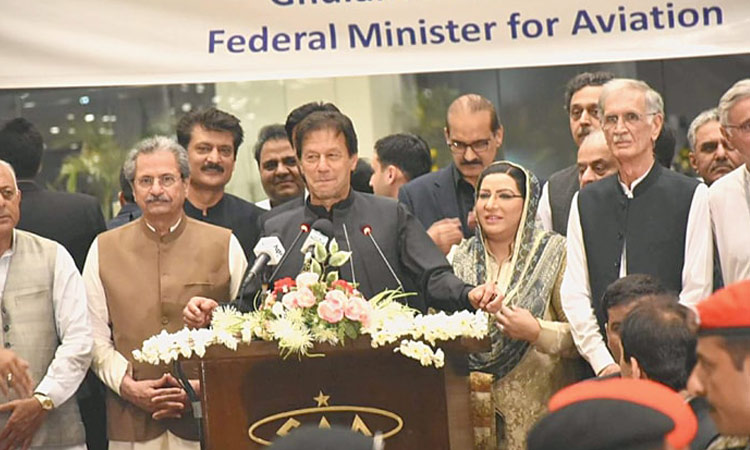 On the first anniversary of 2018 general elections, Prime Minister Imran Khan vowed to carry out ruthless accountability of those found involved in loot and plunder.

Imran returned home from Washington early on Thursday after a visit seen by supporters as a major diplomatic success, saying he felt like he had when he came back after winning the cricket World Cup.

Meanwhile, the ruling Pakistan Tehrik-e-Insaf (PTI) observed it as a thanksgiving day.

US President Donald Trump's warm reception of Imran and a delegation including the army chief and the head of the ISI intelligence service was a welcome relief to a government under increasing economic pressure at home.

Offering reassurance that Pakistan would help seal a peace agreement with the Taliban to allow US troops to withdraw from Afghanistan, Imran went some way towards rebuilding Pakistan's image in Washington after years of US suspicions.

Imran said Pakistan is bound to be a great country in pursuance of the ideals set by great poet philosopher Allama Iqbal.

The Pakistan Tehrik-e-Insaf (PTI) workers were present at the airport where a stage was raised for Imran to address the gathering.

After appearing from the airport, Imran waved to the fully charged welcoming gathering. Upon the warm and resounding reception accorded to him, he said it seems he has not come after a foreign visit, instead, it gives him the feeling that he has come back after winning the World Cup.

The prime minister said Pakistan is the only country that came into being in the name of Islam. "I call upon to never forget that we are to become a great nation. Neither I have ever bowed down to any one, nor will I let my nation to do so. We are to become a self-respected nation.”

He said his struggle is focused to make the country one of the great nations of the world based on the principles set by the Holy Prophet (peace be upon him) upon which he founded the state of Madina. "I won’t let you down as you reposed confidence in me in the general elections. Short of punishing the people who bankrupted the country and looted its coffers, the nation can’t make progress.”

"We have to transform all institutions which had been destroyed by thieves who only want to loot Pakistan.”

Without naming former rulers, the prime minister said he had asked the United States and other western countries to help Pakistan in getting back its looted wealth that the “thieves and robbers” had stashed abroad.