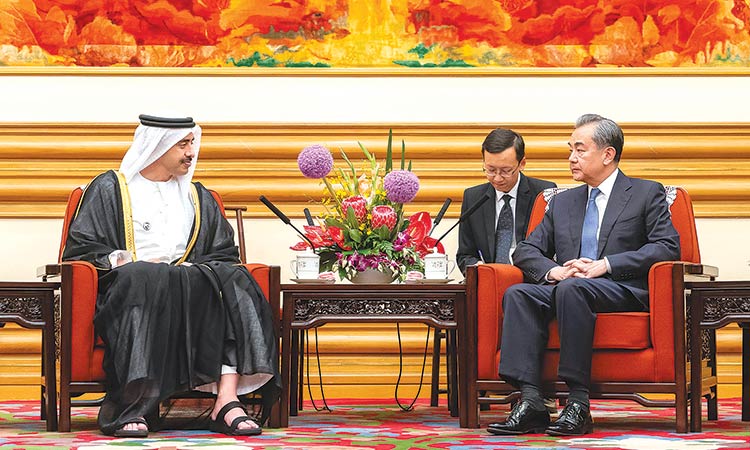 Sheikh Abdullah meets Wang Yi at the Ministry of Foreign Affairs in Beijing on Sunday.

The two sides also exchanged views on the latest regional and global developments.

Sheikh Abdullah termed the strategic ties of the UAE and China as “strong”, thanks to the support and keenness of the Emirati and Chinese leaders to boost joint cooperation in order to  realise the aspirations of their people.

The Chinese top official also lauded the prominent standing occupied by the UAE, regionally and internationally.

The UAE and China maintain close ties as a result of the continuous efforts of the leaderships of both countries to further bolster bilateral cooperation.

China, and Dr. Ali Obaid Al Dhaheri, Ambassador of the United Arab Emirates to the People’s Republic of China.

The UAE will host an Economic, Investment and Trade Forum  in Beijing today. Celebrating the 35th anniversary of the close relations between the two countries, the event will  promote cooperation for future generations, inspired by the bilateral strategic partnership.

The forum during the three-day China visit of His Highness Sheikh Mohamed bin Zayed Al Nahyan, Crown Prince of Abu Dhabi and Deputy Supreme Commander of the UAE Armed Forces, is set to witness many participants from diverse specialisations.

This is His Highness Sheikh Mohamed’s fourth trip to Beijing, which reflects the mutual confidence of the UAE and China in their strategic partnership and joint efforts to create a united future based on over three decades of accomplishments.

The meetings of His Highness Sheikh Mohamed and his delegation with the Chinese leadership is covering many common interests, which are part of the 13 pillars of the strategic

In all these sectors, the joint cooperation between the UAE and China aim to encourage their public and private sectors to jointly make use of opportunities provided by China’s capabilities and the UAE’s infrastructure.

Xi Jinping, President of China, has always expressed his admiration for the ideology and vision of His Highness Sheikh Mohamed, and their similar views on sustainable development, as

well as their joint commitment to promoting tolerance, employing soft power, and spreading stability and peace in the Middle East and the rest of the world.

During Sheikh Mohamed’s three previous visits to China since 2009, a robust partnership between the public sectors of both countries was established, which would be reviewed during the current visit. Both parties will also discuss further development of the partnership in this area.

Sheikh Mohamed’s visit comes at the invitation of Chinese President Xi Jinping, where he is expected to discuss with his Chinese counterparts ways of enhancing the comprehensive strategic relations between the two friendly countries and a number of regional and international issues of common concern. 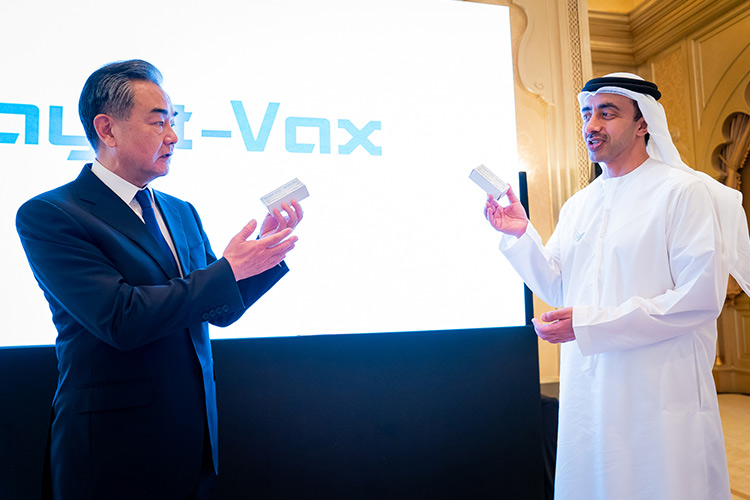 Two nations have launched "Life Sciences and Vaccine Manufacturing in the UAE" - a joint project by the UAE’s Group 42 and China’s CNBG (Sinopharm), to initiate the first COVID-19 vaccine production line in the UAE.