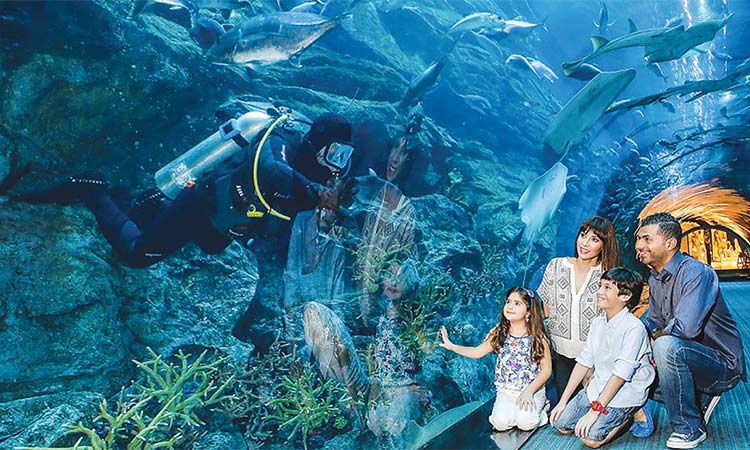 A family at the Dubai Aquarium’s walkthrough tunnel.

Dubai Aquarium & Underwater Zoo, one of the world’s largest aquariums, owned and operated by Emaar Entertainment, has been named the top aquarium in the world by Ceoworld, a leading portal.

One of Dubai’s most popular attractions in The Dubai Mall, Dubai Aquarium & Underwater Zoo was awarded the top spot for its exceptional features including the 270-degree acrylic walkthrough tunnel and the imposing acrylic panel that offers spectacular views of the aquatic species in the oceanarium.

This follows Dubai Aquarium & Underwater Zoo being voted as the No 1 attraction in the Mena region by TripAdvisor.

The accolades for Dubai Underwater Zoo and Aquarium highlight its promise in offering a unique leisure and edutainment experience.

Dubai Aquarium & Underwater Zoo is one of the largest and most diverse aquariums in the world with thousands of aquatic animals. Underwater Zoo, located on Level 2 above the main Aquarium, presents global bio-diversity in different ecological zones including a Rainforest and a Rocky Shore and Ocean, featurecoral reef animals, Giant Crabs, Amazonia Piranhas and Asian Otters, among others.

The Aquarium recently celebrated Shark Awareness Day, dedicated to one of the most amazing and mysterious sea creatures in the world, while promoting a more positive image of sharks.

One of the most popular tourist attractions in the city, the Aquarium has Bamboo Sharks, Grey Reef Sharks, Bonnethead Sharks, Sandbar Sharks, Leopard Sharks, Tawny Nurse Sharks, a collection of Sand Tiger Sharks and many other species of sharks.

The Shark Awareness Day was organised to dispel the fear-based and sensational stories sharks have typically attracted and to put the spotlight on the positive stories about sharks.

And its Aquarist team carefully removes these eggs to avoid possible predation and place them in a dedicated Shark Nursery where the embryos within the eggs are provided with the necessary water quality requirements, observations and care to ensure they are hatched safely.

Dubai Aquarium & Underwater Zoo has placed cameras within its Oceanariums to record footage of shark behavior which includes breeding behaviours – with confirmation of successful mating of sharks that help estimate the birth dates of specific sharks.

It has been observed that the breeding behaviour of Sand Tiger Sharks is often triggered by a drop-in temperature, so it is important that to fluctuate the temperature in the water during the summer and winter months to trigger such behaviours.

Such records are vital in ensuring the sharks receive adequate nutrition with aquarists identifying each of the sharks and keeping a record of the amount of food intake daily.

Dubai Aquarium & Underwater Zoo, one of the world’s largest aquariums, owned and operated by Emaar Retail, has been honoured with the 2012 ‘Certificate of Excellence’ by TripAdvisor following exceptional traveller reviews and ratings.

The world-renowned attraction was honoured with the prestigious international accolade for achieving outstanding visitor reviews of four or higher out of five from the world’s largest travel site.

The judging criteria also accounted for a high volume of reviews in the last twelve months, with visitors describing Dubai Aquarium & Underwater Zoo as a ‘fabulous experience’, ‘the best we ever saw,’ ‘superb’ and ‘informative’ for its edutainment offering.