Solution to relieve yourself of painful joints - GulfToday 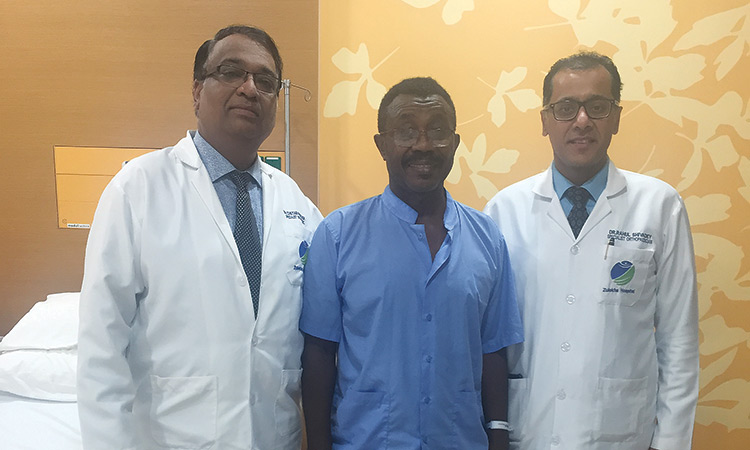 Take it from Philip Tautar who finally consented to a four-hour surgery to permanently relieve him of Degenerative Osteoarthritis that had become burdensome in more than 12 years.

“I am very happy. I am able to walk and move again without the mental stress of never-ending pain,” he said.

Records from the medical file of specialist orthopaedician Dr. Rahul Shivadey showed that the 52-year-old “had been suffering with extreme Unilateral Primary Osteoarthritis (right knee) in over 12 years, unable to bear the pain.”

Shivadey told Gulf Today that if Tautar had continually ignored the “very painful condition, he would continuously be on pain killers and analgesics that would have an adverse effect on his renal functions.”

“His mobility and work would have been severely compromised,” he also said.

On the joint consultations Tautar had with Shivadey and the doctor’s colleague and fellow specialist orthopaedician at Zulekha Hospital-Dubai, Dr. Chetan Prakash, they noted that the dairy farm worker “was already losing focus on the job due to painful restricted movements.”

They found out that Tautar’s work required him to stand for long hours. They discovered too that Tautar was scared of going under the knife. Thus, his preference to pop up “pain relieving anti-inflammatory drugs” every now and then.

Shivadey said: “Pain relieving anti-inflammatory drugs can only help to a certain extent, beyond which surgical treatments are the only respite to patients.”

With Shivadey and Prakash in the operating theatre, they removed the eroded portion of Tautar’s right knee and re-aligned it with a cemented total knee.

“We learnt that the complex dislocating deformity would not enable a complete correction and standard knee prosthesis would not give us 100 per cent results. Within minutes of evaluating the complexity of the deformity, we took a quick decision to use a higher grade comprehensive prosthesis for the knee replacement. This gave us variable options that allowed us to customize the knee implant literally to suit his original bone structure,” said Shivadey.

Prakash appreciated that Tautar had been enlightened with the must-do knee operation: “Such cases need a very clear diagnosis and planned team effort. Our goal was to enable a full correction of the deformity he had been into for over 12 years.”

“We were happy that Philip (Tautar) cooperated. Cooperation, that is very important,” Prakash continued.

Shivadey and Prakash said the knee replacement is made of titanium which is “completely safe.”

Tautar shall be going through a three-month therapy programme to strengthen his leg muscles.

He was advised to avoid even the simplest of “jerks” on his right knee “so that the soft tissues that will take time to gain strength will not be damaged,” according to Shivadey.

Shivadey said long standing deformation of the knees—Tautar’s condition—needed immediate attention “because if left untreated, it becomes difficult to correct the bony defects (as well as the) ligament and muscle issues.”

“Long-term therapies may be (required) to regain normalcy. A person’s lifestyle may be impacted due to the pain.”

Shivadey answered in the negative: “But early treatment can only increase the longevity of the bones. With age, de-generation of the bones is a natural process. The strain on our body increases the damage and a healthy lifestyle with a good fitness regime only helps our body sustain longer.”

The perefct food for your little bundle of joy

Exclusive breastfeeding for the first six months of a baby’s life followed by breastfeeding in combination with complementary foods until at least 12 months of age protects the baby from a host of diseases.