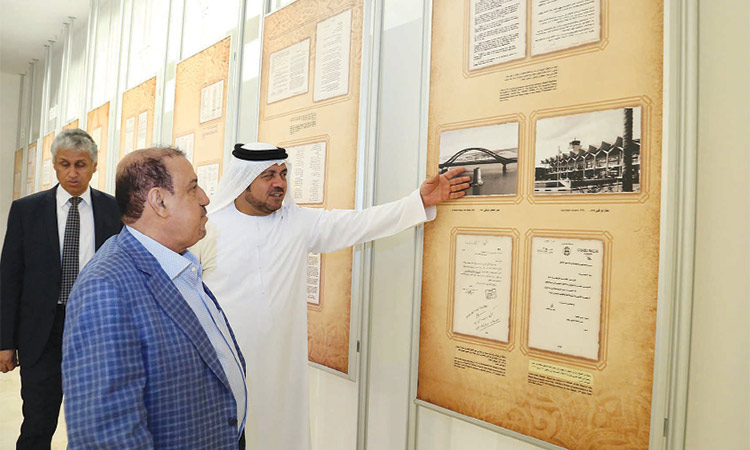 Sultan Saeed Al Burkani, Speaker of the Yemeni House of Representatives, at the National Archives’ headquarters in Abu Dhabi on Wednesday. WAM

The Ministry of Health and Prevention (MoHaP) said the public must be wary of where their meat supply are sourced from. The caution was released to the media on Wednesday with MoHaP-International Health Regulations and Pandemic Control Office director Dr Fatima Al Attar, warning against the violations of rules and regulations on the slaughter of livestock in the run-up to the Eid Al Adha projected to be observed in the UAE from evening of Aug. 12 to 15.

The warning was in relation to the possible eruption of the Crimean-Congo Haemorrhagic Fever (CCHF) “resulting from the indiscriminate slaughtering of sacrificial animals, whether at house or by unauthoried street butchers.”

Such type of illegal slaughtering is increasing with the approach of Eid Al Adha, the press release stated.

A case in point was in Eid Al Adha 2012 when Gulf Today personally saw the morning transport of a goat at a residential compound in Abu Shagara, Sharjah for slaughtering.

Al Attar warned against violating the approved requirements of health and safety, in terms of the indiscriminate slaughtering, “away from the approved abattoirs or through unauthorised street butchers (which) can lead to the quick spoilage of sacrificial animals, in view of the absence of the veterinary supervision, high temperatures, exposure to external pollutants and the proliferation of fly, insects and rodents due to the unsafe disposal of slaughter residues.”

In the Dubai Municipality-Abattoirs Sections website, it is stated that all slaughterhouses operating within the emirate should be using the “latest techniques and equipment to meet the requirement of health standards” based on Islamic regulations.

According to the World Health Organisation (WHO) website, CCHF, which is widespread in some parts of Asia such as Central Asia and the Middle East, Africa and Eastern Europe particularly in the Black Sea region, is a viral disease, the source and carrier of which is the tick that thrives in the blood of the sheep, goat, cattle, and ostrich.

Human transmission happens through “close contact” with blood and other body fluids and secretions.

Highly susceptible are the abattoir workers and veterinarians, who may suffer from liver failure and worst, die.

According to the WHO guidelines, this sector would be protected from CCHF, if and when they wear adequate clothing specifically long sleeves, long pants, and gloves in light colours to easily spot ticks as they must always be applying insect repellants before entering their workplaces.

She added that those affected must immediately seek medical help at the onset of the initial symptoms of nausea, vomtting, diarrhea, abdominal pain, sore throat.

Other WHO guidelines include the de-ticking of farm animals before they are delivered to the abattoirs which must always be clean and hygienic.

According to the “Crimean-Congo Haemorrhagic Fever and Expansion from Endemic Regions” published by the “Elsevier Current Opinion Virology” in Feb. 2019, CCHF was first detected and identified in Crimea near the Black Sea of the former USSR in 1944 and in the former Belgian Congo in 1956.

The research paper listed down the countries where the suspected and confirmed cases of CCHF in humans were recorded from 1985 to 2018.

The UAE was identified to have had the cattle-infected originating from Somalia in 1994 to 1995 and the livestock supply from Iran, Pakistan, and Somalia also in 1994 to 1995.