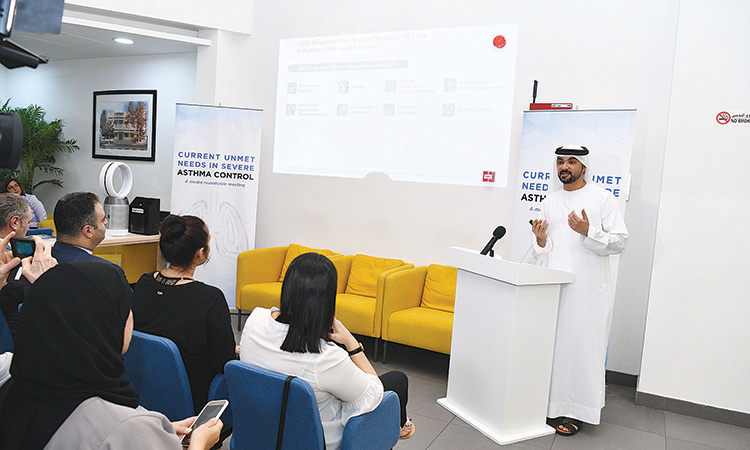 “Yes. We are on our way to start the nationwide registry on severe asthma. Hopefully, we will start before the end of the year,” EARS president Dr Bassam Mahboub told Gulf Today.

The pulmonologist for 12 years updated this reporter on Wednesday on the projected nationwide research study, he had initially termed as “necessary” in a Feb 2019 interview.

Mahboub then claimed it is important that the UAE endeavours to have its own severe asthma research programme or registry in relation to an ongoing global research.

He then said such a UAE study will help in the “genetic profiling” as it would be valuable to know whether people are “genetically pre-disposed to severe asthma.”

On Wednesday, Mahboub said, “People who are genetically determined to have severe disease usually develop a different cause. But I would say exposure to environmental risks and hazards like smoke and dust continuously without taking their medications properly make the airway insensitive to any medication and it becomes severe asthma. Yes. We are on our way to start the nationwide registry on severe asthma.”

Mahboub was the main speaker at the Wednesday’s “Current Unmet Needs in Severe Asthma Control (A Media Roundtable Meeting) held at the United Medical Centre in Wafi Mall, Dubai in collaboration with Sanofi Gulf.

Asked for the significance of the media roundtable, he said, “There is a need because asthma is still not controlled. Fifty to 60 per cent of it is not controlled. Severe asthma cases have become (burdensome) globally.”

On the global scale, Mahboub said that based on available data, 300 million have been recorded as asthmatic. In the Middle East and Africa (MEA) the range is between 10 and 12 per cent of the total population.

Asthma may surface from childhood that will “come and go, with whizzing sound, cough and shortness, and that which may become mild or even be gone as one ages. Severe asthma is an adult onset condition that stays with you every day, you cannot handle it well, you are unable to do every day chores and functions, even the slightest smell and scent you are going to be affected,” Mahboub said in the February interview.

Mahboub estimated that in the last two to three years, asthma and severe asthma incidents in the UAE were at five to 10 per cent of the adults with 10 to 12 per cent of the entire population.

“Half a billion dirhams are spent on direct cost on asthma cases (in the UAE). We do not count the indirect cost,” Mahboub added, when interviewed on Wednesday.

For him, the challenge which stakeholders must strongly consider to address is the lack of awareness and how asthma and severe asthma must be treated with inhibitors and injectables. He did not recommend steroids.

Mahboub was grateful for the Sanofi-Gulf media roundtable discussions for the needed information dissemination.

Sanofi Gulf-country chair & general manager Jean-Paul Scheuer told this reporter: “As a science-driven company, we always seek to learn and innovate, and scientific researches and collaboration play a pivotal role in that.”

“We are grateful for the opportunity to collaborate with Dr Mahboub, to raise more awareness of the unmet needs on severe asthma. Through partnerships with key healthcare stakeholders, we intend to continue spreading awareness on severe asthma by supporting the continuous medical education of the healthcare professionals.”

The perefct food for your little bundle of joy

Exclusive breastfeeding for the first six months of a baby’s life followed by breastfeeding in combination with complementary foods until at least 12 months of age protects the baby from a host of diseases.