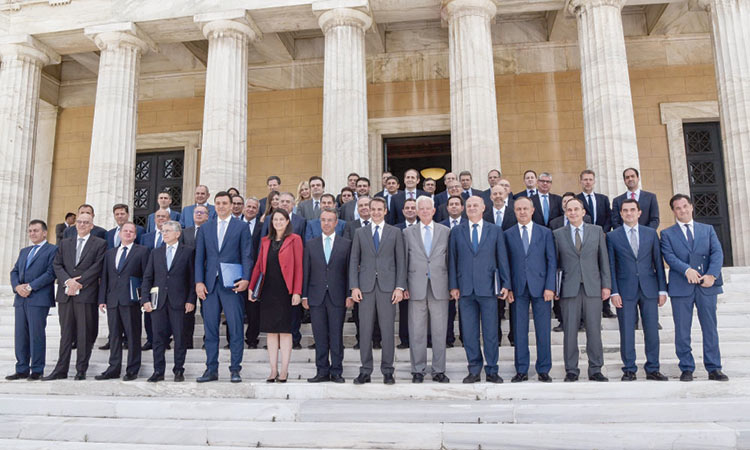 Kyriakos Mitsotakis poses with his ministers after the first cabinet meeting in Athens on Wednesday. Agence France-Presse

Greece’s new conservative Prime Minister Kyriakos Mitsotakis said on Wednesday he would honour a pledge to cut tax that could impact the country’s tight fiscal targets.

Addressing his first cabinet meeting since winning an election on Sunday, the leader of the New Democracy party said a “tax bill with the first cuts we have promised” would be submitted by the end of the month.

Starting in 2020, Mitsotakis has promised to cut a hated property tax called ENFIA − brought in by a previous New Democracy-led government during the economic crisis − by 30 per cent over two years.

He has also offered to reduce income tax thresholds and to gradually cut tax on business profits by eight per cent.

“There isn’t a day to lose,” the 51-year-old Harvard graduate and former McKinsey consultant said, handing ministers a roadmap to December and telling them they would be “continuously evaluated.”

During the election campaign, Mitsotakis said he planned to persuade Greece’s creditors to accept the easing of tight fiscal targets with “a comprehensive reforms package.”

The current framework negotiated with creditors by the previous leftist Syriza government holds Greece to a primary budget surplus of 3.5 per cent to 2022 − but the conservatives say that target stifles growth.

Mitsotakis, who has promised to “resurrect” the heavily-taxed Greek middle class, maintains that New Democracy enjoys “enough goodwill in Brussels” to win over the creditors.

But just hours after his victory on Sunday, eurozone finance ministers warned the new government to stick to the country’s strict public spending commitments.

“We must keep our commitments, this is the only way I know to gain credibility,” Eurogroup chief Mario Centeno told reporters in Brussels.

In May, leftist former premier Alexis Tsipras had announced a batch of tax cuts that both the Bank of Greece and the country’s creditors said could affect agreed fiscal targets.

According to government sources, 40 per cent of new ministers are not professional politicians and include technocrats who gave up careers abroad to “help rebuild the country.”

The new parliament will convene on July 17, and the new government will be submitted to a vote of confidence on July 22, Mitsotakis said.