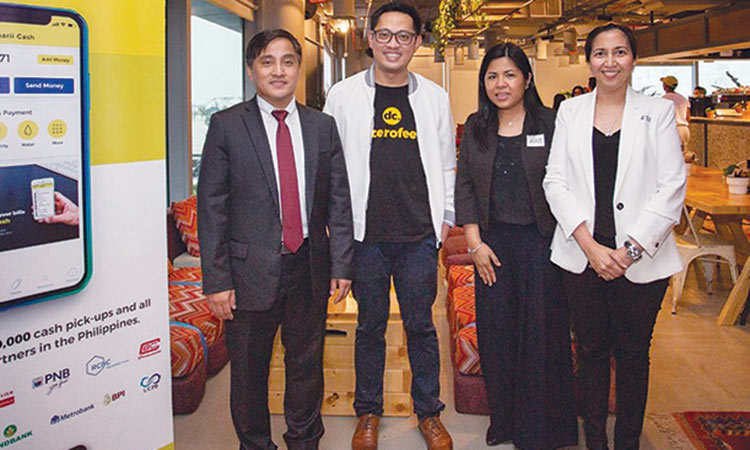 Jon Edward Santillan (second from left) with Paul Raymund Cortes along with Vice Consuls Marianne Bringas and Elizabeth Ramos at the launch.

He described himself as “your usual geek” who dabbled in technology since he was introduced to the computer.

“I am used not to lay on a bed of roses, either,” said Santillan at one point in Filipino, which brought to mind that not all children of overseas Filipino workers (OFWs) could easily sway their parents for their caprices.

The second generation OFW has been a UAE resident since the end of 2004. He decided to follow his parents in Dubai, following some job experience, upon earning his degree in Computer Science at the STI College-Cavite.

Fourteen years hence and not a walk in the park, Santillan is on top of the Denarii cash, an innovation he co-founded with Denver Chua, co-owner of Skyjet Airlines and his childhood “barkada” (buddy) from his native Cavite City, south of Metro Manila.

With the long-term mission and vision towards a cashless borderless society, the innovative mobile application was the grand prize at the May 2019 Dubai Chamber of Commerce and Industry-organised “Dubai Smart-Preneur” innovation competitions.

There were 1,000 competition applicants pared down to half, further sliced to 50 then the Top 10 for the final presentations and verdict.

The downloadable mobile application which for now targets the 700,000 OFWs in the UAE for free remittances back home, was formally launched on June 20 at the Dubai Design District.

According to the family man of two young teenagers, the innovation is not limited to offering its clients an alternative remittance mode wherein “up to $300.00 which is Dhs1,100.00 there will be zero transaction fees.” “What we envision is a mobile wallet which I discovered has been a trend in Southeast Asia,” Santillan said.

In the long term, the safe and secured blockchain-powered mobile application will be another avenue through which enterprises around the world regardless of size may utilize for wider customer reach and therefore increasing profit.

Registered and licensed in the Philippines and the UAE, it has expanded to Saudi Arabia and soon in Bahrain.

The Saudi Arabia chapter came in early 2019 when Santillan received an invite to attend a US-backed accelerator programme for start-ups in the kingdom. That yielded in “big name global financial technology investors.” So far, the mobile application attends to at least 500 transactions a month. It was not an easy journey though for Santillan who unceasingly cherishes the teachings of his parents about money to be used properly at the right time.

He continually tucks in his heart and mind the learnings he had in his early days in the UAE and the vicissitudes of entrepreneurships.

The computer savvy initially worked in a boutique digital agency with sidelines.

With the digital marketing and start-ups trending in the next several years, Santillan played a pro-active role among the community of techies. People noticed him, resulting in more gainful employment not only financially since he also rose up the corporate ladder.

In between were the birth of several digital marketing business partnerships across the UAE with his childhood sweetheart-wife on his side.

The young family moved back to the Philippines in 2016. While on the look-out for start-ups, it was in his trips to neighbouring Southeast Asian countries that the padre-de-familia came across the mobile wallet concept.

The Denarii cash was born in the Philippines in 2017 with “barkada” Chua. But after Santillan’s gargantuan savings had left him financially bleeding.

Santillan is also grateful to a former colleague, Pawel Iwanow, along with everyone who had trekked with him all these years: “He told me, why not start with your fellow Filipinos?” He did.