Filipinos in Dubai, N. Emirates for workshops in arts - GulfToday 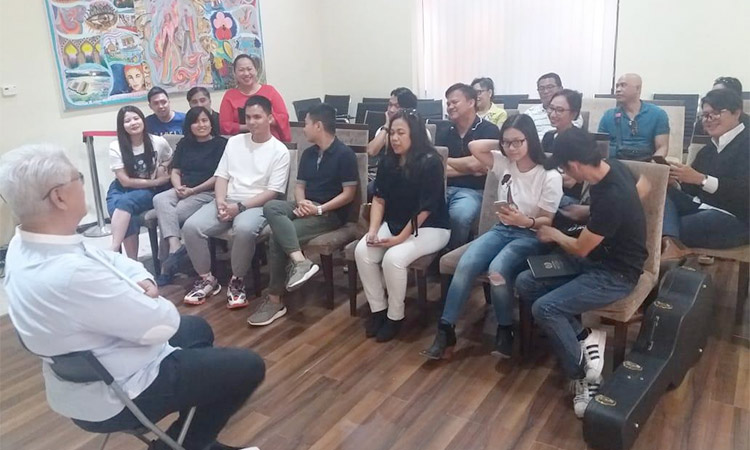 Philippine National Artist for Music Ryan Cayabyab listens to one of the participants at the different techniques of composing music at the Philippine Consulate General in Dubai on Friday evening.

The move is a result of the visits and consequent workshops conducted as part of the Philippine Independence Day 2019 celebrations  by two of the most talented personalities the Philippines has produced and has sculpted names in their respective expertise in the international arena, namely painter Manuel Baldemor and Philippine National Artist for Music Ryan Cayabyab.

Cayabyab is in the UAE for the second time since his 2008 visit wherein as the headmaster of the “Pinoy Dream Academy” (“Big Brother”), he discovered Dubai-based Rizel Garcia who became a resident artist of the television network ABSCBN.

As Cayabyab was given a special concert tribute by the community on Saturday evening, it was on Friday evening that he and his wife, theatre actor Emmie Punzalan held lectures and workshops for 25 at the PCGDXB.

Maricar Prabhash who, along with her husband Peejay have been composing songs and music coaching children in Sharjah, said, “It is a great honour to be a part of the music literacy workshop of Mr and Mrs Cayabyab. Mr C’s wisdom is really remarkable. Having this information first hand from the legendary Philippine songwriter has been a stepping stone for me and for my husband as well who wants to inspire the world through music, especially the younger generation.”

Prabhash took note of the “essentials and secrets of a successful piece and how to market it in a way that would create an impact which can help reach out to the world.”

“I hope we get to see more opportunities such as these that can help inspire the growing generations in their love and passion for music.”

St. Mary’s Filipino Community Choir (Dubai) director Matilyn Bagunu commented, “The workshops were engaging. I learnt the step-by-step guide in writing songs and other techniques in singing high notes without difficulty. What truly made a mark was differentiating happy and sad keys and notes.” The Cayabyabs are part of the movement in the Philippines that encourages more of their countrymen to become more music and performance arts literate.

Mr C is hopeful for more internationally-acclaimed and translated Filipino compositions like “Anak” (“Child”). He is looking forward to more Lea Salonga and other Filipino afficionadoes who have been critically-acclaimed at the West End and Broadway, as well as Arnel Pineda, lead singer of US band Journey.

Citing the international success of the 1970’s quartet Abba of Sweden, Cayabyab at the Thursday evening press conference agreed that what catapulted to the world stage of entertainment South Korea’s septet boy band BTS was that they went through laborious education and training for years that consequently led to the choice of the crème-dela-crème.

Ryan who had performed before the royalties of Morocco, Saudi Arabia, The Netherlands, and Spain, and Emmie are open to conducting more workshops for their countrymen in the UAE.

Husband-and-wife said it is all about passing on to the next generations and giving back.

Consul General in Dubai and the Northern Emirates Paul Raymund Cortes is on the same page, “We would like to inspire a movement of a Filipino people unafraid to express themselves in whatever field of art there is. Music, theatre, dance, photography, visual arts so that they become active contributors to a humanity that continues to improve on his heritage or for the betterment of their lives.”

“The development of the human race cannot move forward without the calculated understanding of what is necessary to go from Step 1 to Step 2 and so on and so forth. That is the reason for the academic side of all facets of the arts.”