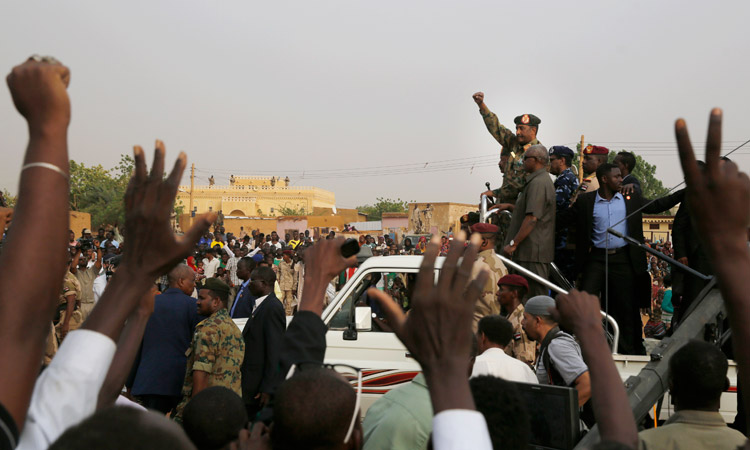 Sudanese Gen. Abdel Fattah Burhan waves to his supporters upon his arrival to attend a military-backed rally.

Troops deployed Sunday in Sudan's capital ahead of a planned mass protest against the country's ruling generals, as calls mounted for restraint to prevent a new military crackdown on demonstrators.

Dozens of demonstrators were killed and hundreds wounded when armed men in military fatigues stormed the sit-in outside army headquarters, shooting and beating protesters who had camped there since April 6.

The new protest, expected to start at mid-day, comes at a time when Ethiopia and the African Union (AU) are jointly mediating between the protesters and generals.

On Sunday, the feared paramilitary Rapid Support Forces (RSF) deployed in pick-up trucks mounted with machineguns in several squares in Khartoum, an AFP correspondent who toured parts of the capital said. 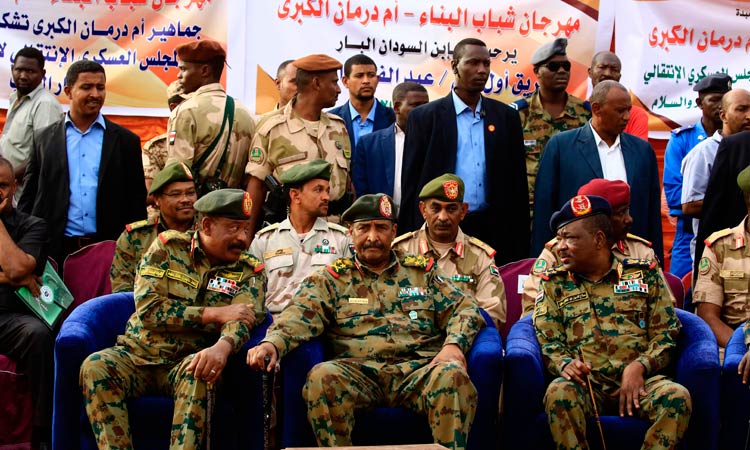 Morning traffic was lighter than usual for a Sunday, the first day of the week.

Shops stayed shut in areas where protesters were expected.

"I didn't open my shop as I am worried for the safety of my property, but I'll stay here and monitor the situation," said Ahmed Mohamed.

On Saturday, RSF supremo General Mohamed Hamdan Dagalo warned that no "vandalism" would be tolerated during Sunday's protest.

"There are vandals, there are people who have an agenda, a hidden agenda, we don't want problems," said Dagalo, who is also the ruling military council's deputy chief.

"I expect large numbers... and it's very possible that security forces will use force," said Mustafa, 25, who gave only his first name for security reasons as he planned to participate.

"There are vandals, there are people who have an agenda, a hidden agenda, we don't want problems.

Another protester, Talal, 29, was looking forward to Sunday's rally, the first since the crackdown.

"Even if only a few rallies take place in Khartoum, they will break the barrier of fear and more people will take to the streets" in the coming days, he said.

The umbrella protest movement, the Alliance for Freedom and Change, said demonstrators will launch rallies from several areas in Khartoum and its twin city of Omdurman, and march to the homes of some of the protesters killed on June 3.

About 130 people have been killed since the crackdown, the majority of them on that day, according to doctors close to the alliance.

The ruling military council insists it did not order the dispersal, but acknowledged "excesses" after orders were given to purge a nearby area allegedly notorious for drug peddling.

The council has warned it would hold the alliance "entirely responsible if any soul is lost" in Sunday's protest.

Tensions remains high since the June 3 raid, which followed the collapse of talks over who should lead a new governing body -- a civilian or soldier.

Ethiopia and the AU have proposed a blueprint for a civilian-majority body, which the generals say could be a basis for resuming talks.

Protesters had initially gathered at the military headquarters to seek the army's support in ousting longtime ruler Omar al-Bashir.

"Even if only a few rallies take place in Khartoum, they will break the barrier of fear and more people will take to the streets.

They kept up their sit-in to demand civilian rule after the generals deposed the president on April 11.

The European Union, several Western nations and rights groups have called on the generals to avoid any violence on Sunday.

Demonstrators' "right to peacefully protest and express their views on 30 June, or on any other date, remains key," the European Union said.

Amnesty International's Secretary General Kumi Naidoo said the military council "must not allow the country to slide back into yet more repression."

"The world is watching."

But mobilising protesters has become a challenge since the raid, as the military rulers have imposed a widespread internet blackout.