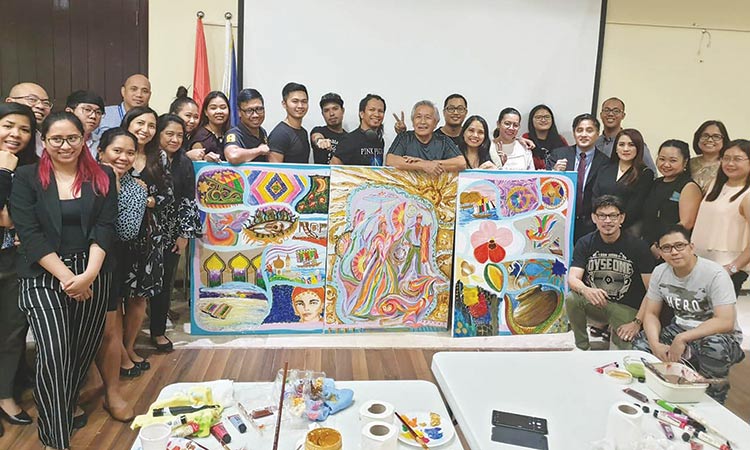 Manuel Baldemor (seventh from right) with the Filipino artists at the Philippine Consulate General in Dubai.

In two separate workshops he had conducted in Abu Dhabi and Dubai for the 46 invited participants, Baldemor also expressed hope he had sent across the essence of the virtue of humility as he matter-of-fact stated that people in the fields of art may become egoists.

The 72-year-old who grew up partly sustaining his education with the sale of his artworks since adolescence, conducted the Abu Dhabi segment workshop on June 13 at Etihad Museum Gallery where he also taught nine Filipino children the basic rudiments in colouring.

On June 18, he met up with the 25 other artists making a name for themselves in Dubai and the Northern Emirates over at the Philippine Consulate General in Dubai (PCGDXB).

On Wednesday evening and before the inauguration of the Sentro Rizal at the Philippine Embassy (AUHPE), Baldemor told Gulf Today: “Filipinos tend to become more Filipino when outside of our country. I have noticed that in all the artists I have (taught and workshopped with in all the countries I have been to). It is the perspectives we get from our experiences where we are and how we relate (these to our history and the current events back home).” “Art helps us express ourselves. It helps us pour out what is within us. Yung hugot (That which we draw out from within),” Baldemor added, repeating what he had told this reporter on June 12, after Philippine Ambassador to the UAE Hjyaceelyn Quintana led the inauguration of his 30-piece “Islamic Philippines” acrylic-mixed media paintings exhibition.

The exhibition was part of the Diplomatic Reception hosted by the AUHPE as well as the one hosted by the PCGDXB on June 16 for the 121st commemoration of the Philippine Independence from Spain.

The Filipino “hugot” is a significant element in the arts, according to the native of Laguna Province whose younger years were spent as a cartoonist in a Manila publishing company, where his creative writing spirit was honed as well: “We can build bridges among men and nations through the arts. Art requires no visa.” Baldemor stated it based on his experience of having gone to at least 50 countries where in some, he was artist-in-residence for between a few months to half-the-year promoting not only what Filipino art is but also expanded his knowledge on the arts of other cultures.

For instance, in Egypt, he learnt using papyrus as his canvas.

Moreover, the man behind voluminous cards of the United Nations International Children’s Education Fund, and has so far contributed Php34 million (Dhs2.1 million) to the international agency’s projects, related the quest for learning with the children’s workshops integrated in all his itinerary in the Philippines and overseas: “Children are my teacher too.” Yet, Baldemor also pointed out the worth of “being in control” in art sessions to remind artists that they must remain humble.

He did so in his collaborative works with the 21 artists in Abu Dhabi and the 25 in Dubai and the Northern Emirates.

For the Abu Dhabi segment, Baldemor began the artwork with his own interpretation of the mythical Filipino-Muslim (Maranao) “Sarimanok” to become the 100 centimetre X 240 centimetre cornucopia of what “Islamic Philippines” is for the 21 artists which included the Philippine ambassador.

For the Dubai and the Northern Emirates workshop, he started the painting with the Maranao folk dance called “Singkil” and with the 25 transposed this to become the 120 centimetre X 300 centimetre “Islamic Mindanao.” Tom Alvarado, the younger brother of Philippine national artist (contemporary art) Nunelucio Alvarado, Baldemor’s friend, said: “The workshop was a good initiative of Consul General Paul Raymund Cortes. It gave me the chance to see Manong Manny again. It has given us the opportunity to mold and breed new aspiring artists.” Dee Dipon said the June 13 workshop was a “dream come true since even if I had been mentored by artists from other countries, being taught by Master Baldemor is something deeper and more meaningful. He is our pride.” Donnabel Barrera Cantila said: “It was just a ‘wow’ listening to how he reached how he has become as our very own genius who gives back to society.”