Sisi reaffirms support for UAE against all challenges - GulfToday 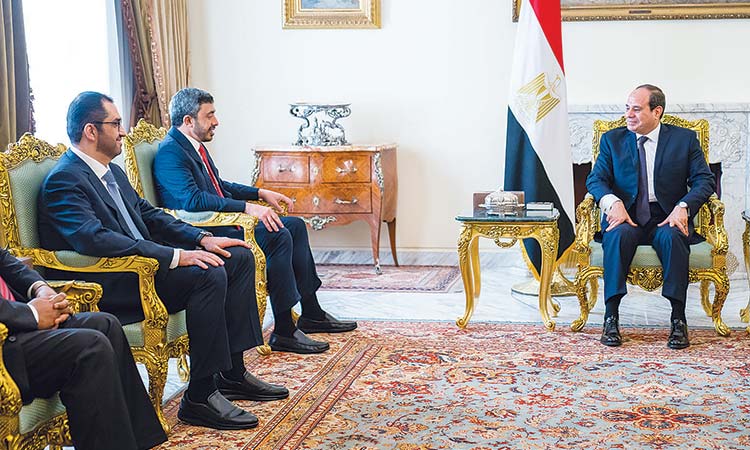 “Egypt is avidly following up the ongoing developments in the Arabian Gulf region, particularly the latest incidents that posed a menacing threat to the safety of maritime navigation,” said Sisi, doubling on Egypt’s support for the governments and peoples of “UAE and other sisterly countries against the various challenges, including attempts to destabilise the region, which Egypt considers an integral part of its national security.”

The meeting addressed regional issues of mutual concern, particularly the situation in Libya, with the two sides sharing identical views on supporting counterterrorism efforts and all endeavours to establish security and stability in Libya and the entire region.

They underscored the necessity of restoring stability in Libya to pave the ground for securing the constitutional rights of the Libyan people and their ambitions.

Sheikh Abdullah and Sisi also reviewed the latest developments in Sudan and expressed explicit solidarity with the people of Sudan to survive the current critical stage and fulfil their ambitions.

On Yemen and Syrian, the two sides affirmed their continued efforts to forge political solutions to the crises experienced by the two nations and put an end to their suffering. They accentuated the importance of supporting the two countries’ sovereignty, territorial integrity and protection of their national assets and gains.

A day earlier Sheikh Abdullah had said that actors that seek to destabilise the Middle East and North Africa with their backwards, extremist stances, impede the region’s ultimate development goals.

“We depend on friendly nations, like that of Bulgaria, to confront with us the fascist regimes that seek to destroy the region through peaceful means, spreading values of tolerance and success. Together, we can prevail over darkness,” he had said during a press conference in the Bulgarian capital, Sofia .

According to the UAE Minister of Foreign Affairs and International Cooperation, the two sides touched on the recent developments in the Arabian Gulf and the Gulf of Oman, as well as the attacks on Saudi Arabia by Houthi militias that targeted the Kingdom’s two pump stations on its East-West pipeline, and the Abha International Airport injuring several civilians.

“We are in a complex region that has many resources, whether gas or oil, that are necessary for the world. We want the flow of said resources to remain safe, and to ensure the stability of the global economy. We must also secure our peoples and our economies,” Sheikh Abdullah affirmed.

“For us, the attacks on four oil tankers in the UAE’s territorial waters are evidence that we, alongside our various partner countries, have identified as underwater explosions, utilising sophisticated technologies.”