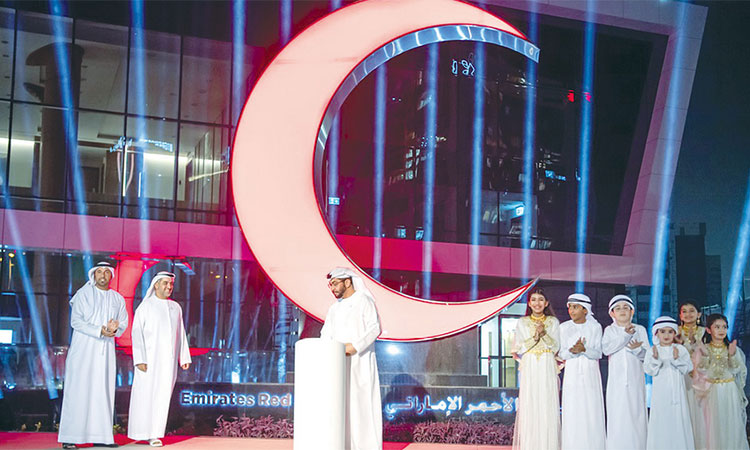 During the opening of the new ERC headquarters at Zayed Sport City in Abu Dhabi.

Sheikh Hamdan praised the support given by President His Highness Sheikh Khalifa bin Zayed Al Nahyan, to the humanitarian works and his initiatives aimed at alleviating the suffering of people around the world. He also lauded the vital role played by His Highness Sheikh Mohammed bin Rashid Al Maktoum, Vice President, Prime Minister and Ruler of Dubai, and His Highness Sheikh Mohamed bin Zayed Al Nahyan, Crown Prince of Abu Dhabi and Deputy Supreme Commander of the UAE Armed Forces, in support of the national humanitarian and charitable organisations, including the ERC.

Sheikh Hamdan also referred to the significant support given to the ERC activities by the partners and donors, enabling it to excel in the fields of humanitarian works.

In the opening speech, Dr Hamdan Musalam Al Mazrouei, Board Chairman of the ERC, said the dream of a permanent building from which the ERC can continue its growing operations has become true, thanks to the continuous support of the leadership and the close following by Sheikh Hamdan bin Zayed Al Nahyan.

Dr Mohammed Atiq Al Falahi, Secretary General of the ERC, said the heptagon-shaped building sympolises the seven emirates of the UAE, as well as the seven principles of the International Red Cross and Red Crescent Movement.

As part of the opening ceremony, Sheikh Hamdan also launched the new ERC vest. The vest is worn during the various relief and emergency operations.

During the ceremony, the ERC bestowed the Goodwill Extraordinary Ambassador title on Emirati artist Hussain Al Jasmi, in recognition of his strong support to its humanitarian and development activities and programmes.

The agreement also provides for development of a joint strategy to exchange expertise and know-how. The agreement was signed by Dr. Sultan bin Ahmad Sultan Al Jaber, Minister of State and Adnoc Group CEO, and Dr Hamdan Musalam Al Mazrouei, Board Chairman of the ERC.

The agreement comes in line with the directives of Sheikh Hamdan bin Zayed Al Nahyan to build constructive partnerships among the public and private organisations and companies in the UAE to boost the ERC’s initiatives and to enhance the UAE’s developmental role in the international humanitarian arenas.

After signing the agreement, Dr. Sultan Al Jaber said: “In keeping with the leadership’s directives to enhance social welfare, we are pleased to sign an agreement with the ERC as part of the company’s role as a key contributor to the economic and social development drive.”

“We at Adnoc are proud to collaborate with the ERC under the aegis of  Sheikh Hamdan bin Zayed Al Nahyan, Ruler’s Representative in Al Dhafra Region and Chairman of the Emirates Red Crescent, ERC. This collaboration coincides with the Year of Tolerance in the UAE, reflects the progress of the humanitarian and social works in the UAE and provides a shining example for synergies among the national companies and social institutions through implementation of programmes to ease the suffering of the underprivileged,” he added.