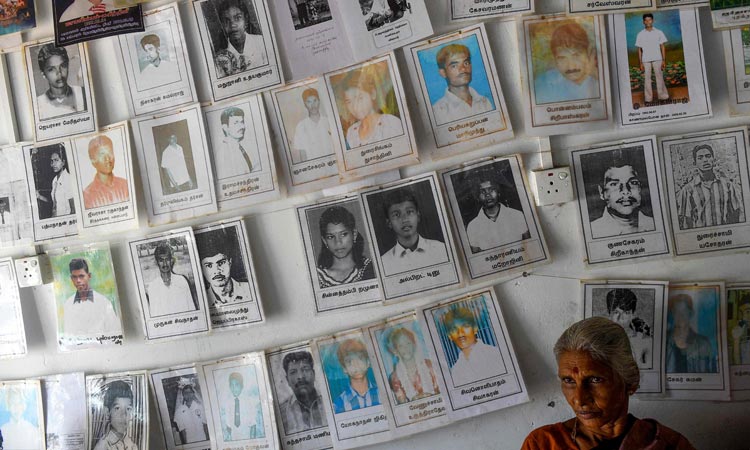 Still reeling from the Easter terror attacks, Sri Lanka commemorates this weekend 10 years since the end of a bloody civil war that killed at least 100,000 people, from which the scars are still not healed.

Security was tight in the north of the island, home to Sri Lanka's minority Tamils, ahead of solemn ceremonies on Saturday.

Sri Lanka's government and top military brass were due to hold their own commemoration in Colombo on Sunday.

On May 18, 2009 government forces brought their no-holds-barred military offensive to an end at a lagoon in the northern coastal district of Mullaittivu with the killing of Velupillai Prabhakaran, leader of the rebel Tamil Tigers.

Sri Lanka's then-president Mahinda Rajapakse declared an end to the 37-year separatist conflict — marked by massacres, suicide bombings and assassinations — between Tamil militants and the central government, which is dominated by the majority Sinhalese.

But for thousands of war widows and other victims on both sides, this marked the start of a new struggle: to find out the fate of their loved ones. 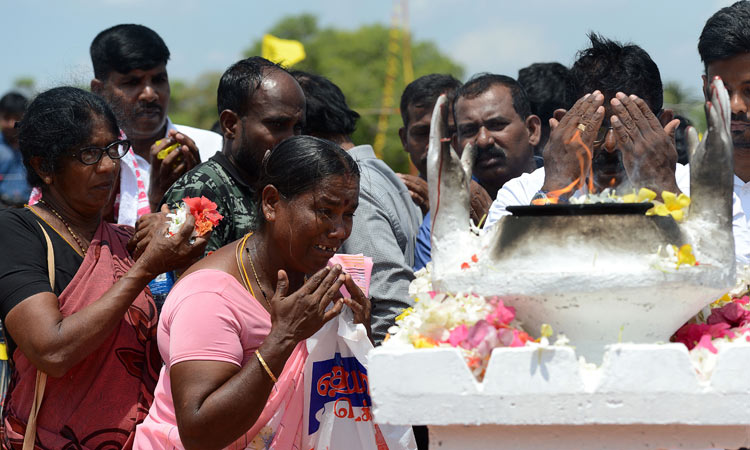 A Sri Lankan woman reacts in a ceremony at Mullaivaukkal. Ishara S. Kodikara/AFP

"He was last seen with the Sri Lankan army, and after that we haven't seen him," she told AFP at a tiny makeshift office in Mullaittivu, where a notice board was covered with dozens of photos of missing people.

Nagaraja Sureshamma, 65, who lost one son and is still looking for the other, recalled the horrors of the final months and how civilians scrambled to escape indiscriminate attacks and shelling.

"We were all going together, but my son happened to go on a different route... Ever since, we have not been able to find him," Sureshamma said.

"If they are not alive, then they need to tell us that at least," said Mariasuresh Easwari, an activist trying to help find the missing.

"Did you murder them? Did you bury them? Tell us."

Sri Lankan forces have been accused of killing about 40,000 Tamil civilians in the final months of the war, a charge successive governments have denied.

“If they are not alive, then they need to tell us that at least. Did you murder them? Did you bury them? Tell us.

Several mass graves containing skeletal remains have been found in the past two decades, but only a handful of those buried have ever been formally identified.

Until recently, even remembering the war dead was considered subversive and annual memorial services by Tamils were trashed by government forces.

Government forces have set up memorials in the north for fallen security forces and bulldozed Tiger cemeteries, obliterating any sign of the rebels who at their zenith controlled a third of Sri Lanka.

The International Crisis Group (ICG) said in a recent report that the new government's promised political reforms and accountability for wartime atrocities have failed to materialise.

"For many Sri Lankans living in the bitterly contested north and east, the war has never quite ended," it said.

Women take part in a ceremony on the outskirts of Jaffna. Ishara S. Kodikara/AFP

A Sri Lankan woman reacts as she takes part in a ceremony. AFP

A woman holds a picture of a missing loved one. AFP

A Sri Lankan woman reacts as she takes part in a ceremony at Mullaivaukkal on Saturday. AFP

A man takes part in a ceremony at Mullaivaukkal on the outskirts of Jaffna on Saturday. AFP

Although the pain for many families remains, and many in the 2.5-million-strong Tamil community still feel disadvantaged, the end of the war did open a peaceful new chapter in which Sri Lanka's economy and tourism boomed.

But this peace that was shattered on April 21 when militant suicide bombers targeted three churches and three luxury hotels, killing 258 people -- including 45 foreigners.

The attackers were homegrown extremists -- the Daesh group also claimed credit -- and riots since saw dozens of homes, businesses and mosques of Sri Lanka's Muslim minority vandalised. One man was killed by a mob wielding swords.

According to the ICG, the Easter attacks "compounded the general anxiety, tearing again at the social fabric, unleashing further violence and complicating the road to sustainable peace".

“As much as we mourn the soldiers who were killed in the war, (minority Tamil) civilians also have a right to commemorate their war dead.

Evoking memories of past dark times, a state of emergency has been in place since April 21 with the return of some wartime restrictions on free movement.

"As much as we mourn the soldiers who were killed in the war, (minority Tamil) civilians also have a right to commemorate their war dead," he said on Thursday.