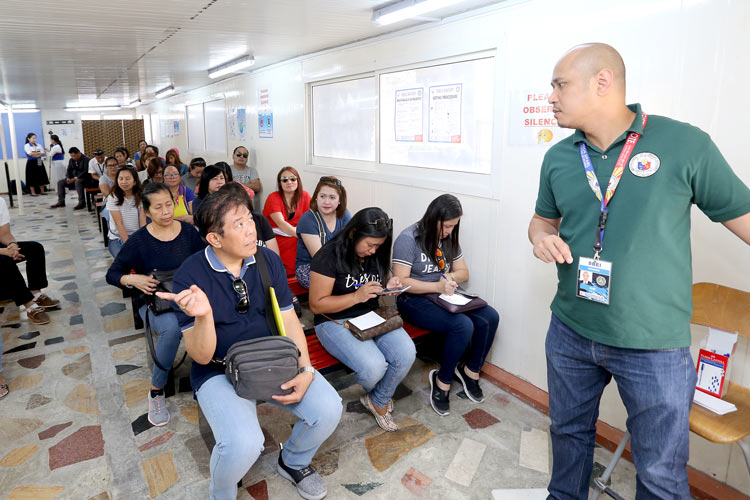 Nine hundred and eighty-eight Filipinos in Dubai and the Northern Emirates cast their votes at the Philippine Consulate General in Dubai. Photo: Kamal Kassim/Gulf Today

Filipinos in Dubai and the Northern Emirates voted for Duterte administration senatorial candidates at the just concluded 31-day overseas voting (OV) for the May 13 Manila midterm elections.

Meanwhile, the last voter to enter the Philippine Consulate General in Al Qusais, Dubai before security guards and PCGDXB personnel shut the wooden door at 2 p.m., in synchrony with the 6 p.m. end of the electoral process across the Philippines on Monday was three-year Dubai resident Reynaldo Duerme.

The 31-year-old sales and marketing person at a company situated in Business Bay was cheered on by both the PCGDXB personnel, OV volunteers and media the moment he stepped into the diplomatic mission premises at exactly 2 p.m.

He took the chance to cast his vote and left his office at 12 noon just so he could do so along with a housemate and a kababayan (countryman) who asked them if she could hitch ride with them to the diplomatic mission.

“It is my first time to be an overseas voter. I really took the chance because I really wanted to participate but work had somehow delayed my coming over here,” said Duerme who also comes from Davao City, President Rodrigo Duterte’s hometown.

The 45 men and women of PCGDXB alongside OV volunteers from the over 600,000 Filipinos in Dubai and the Northern Emirates rested a bit before they prepared themselves for the grueling non-stop reading of ballots cast and the completion of the administrative procedures, expected to last for 12 to 13 hours or Tuesday dawn before the entire certificates of canvas (CoC) would be personally delivered to the Philippine Embassy in Abu Dhabi for the consolidation of the COCs before electronically sent to Manila. Ambasssador Hjayceelyn Quintana would fly to Manila for the personal delivery of the COCs.

A total of 28,487 out of the 209,862 registered voters in Dubai and the Northern Emirates were able to participate in the OV with 988 doing so on Monday.

At 4 p.m. when Gulf Today stepped out of the PCGDXB compound, security guards were pacifying a group of women and one man ranting why they were not informed that the May 13 OV would only be until 2 p.m. and turned their ears deaf on explanations from the security guards.

They argued with this reporter on the massive information drive on the announcement of the schedules since April 13. They refused to listen to Consul General Paul Raymund Cortes and Deputy Consul General Renato Duenas with regards the election rules of Manila’s election body, the Commission on Elections (Comelec).

By 5:30 p.m. a group of nannies from distant Kalba in Sharjah begged the security guards to let them enter the premises to vote claiming it was only on Monday afternoon that their employers allowed them to go to the diplomatic mission to exercise their right to suffrage. They immediately left when explained to them that the electoral process ended at 2 p.m. as per Comelec rules.