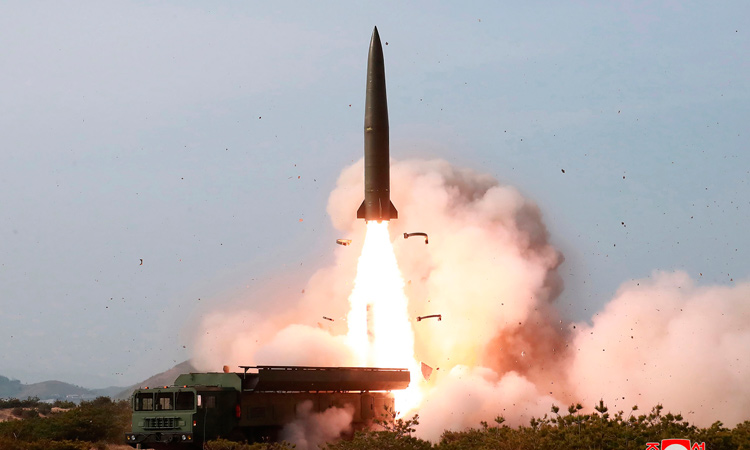 North Korea welcomed a US envoy's visit to Seoul by firing at least one projectile for the second time in a week on Thursday, the South's military said, as Pyongyang seeks to up the ante in deadlocked nuclear negotiations with Washington.

It was also hours after the US Special Representative on North Korea, Stephen Biegun, arrived in Seoul late Wednesday for talks with South Korean officials on the allies' approach towards Pyongyang.

It is Biegun's first visit to Seoul since the Hanoi summit between US President Donald Trump and the North's leader Kim Jong Un collapsed without agreement on rolling back Pyongyang's nuclear programme in exchange for sanctions relief. 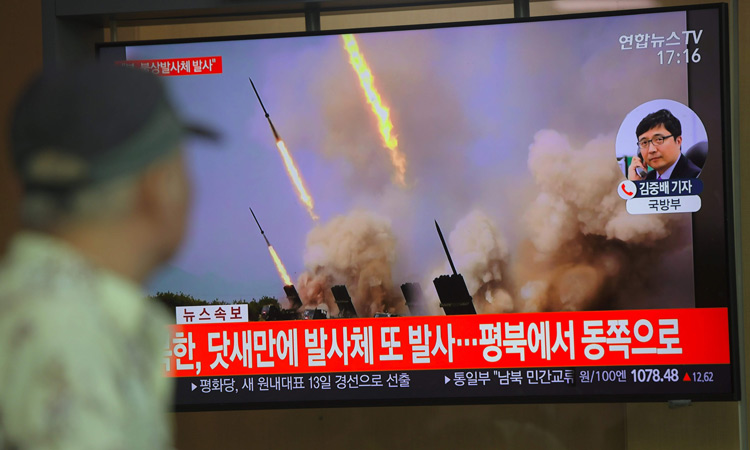 "We are still analysing whether it is a single or multiple projectiles," Joint Chiefs of Staff spokesman Kim Joon-rak told AFP, adding the launch fired in an eastward direction appeared to originate from Sino-ri in North Pyongan province.

The decades-old Sino-ri operational missile base, 75 kilometres (45 miles) northwest of Pyongyang, is one of North Korea's longest-running missile facilities and houses a regiment-sized unit equipped with Nodong-1 medium-range ballistic missiles, according to the Centre for Strategic & International Studies.

Anything fired from it in an easterly direction would have to cross the Korean peninsula before reaching the sea.

Biegun met his South Korean counterpart Lee Do-hoon for breakfast on Thursday but much of his schedule was not made public.

"We are still analysing whether it is a single or multiple projectiles.

The US envoy is due to meet the South's foreign and unification ministers Friday as the security allies — Washington stations 28,500 troops in the South to defend it from its neighbour — work on their approach towards Pyongyang.

With Thursday's launch, said Hong Min, a senior researcher at the state-run Korea Institute for National Unification, "North Korea is sending a clear message that it will not be satisfied with humanitarian aid" being considered by Seoul.

"It is saying, 'We want security guarantees in return for the denuclearisation process'," he added.

"Kim could have felt he needed to show a strong military posture to ease complaints following a joint South-US military drill last month."

A summit between South Korean President Moon Jae-in and the North's Kim Jong Un a year ago triggered a rapid diplomatic thaw on the peninsula, paving the way for a historic first meeting between Kim and Trump.

But their second summit in Vietnam in February broke up without an agreement or even a joint statement, and the North has since blamed Seoul for siding with Washington, leaving inter-Korean relations in limbo.

People watch a TV news programme at the Seoul Railway Station in Seoul.

But Pyongyang, Seoul and Washington have all refrained from calling Saturday's launch a missile, which could jeopardise the ongoing diplomacy by violating UN Security Council resolutions as well as Kim's promise of a freeze on long-range missile tests.

But experts say it launched at least one short-range missile during the exercise, with a report on the respected 38 North website suggesting that it was a "direct import" of a Russian-produced Iskander.

"The debris generated by the launch in North Korea is a virtual match of a launch of Iskander conducted by Russia," it said.

If North Korea imported Iskanders from Russia, the report added, "it has an existing capacity to deliver warheads to targets in South Korea with great precision".

Pyongyang insisted earlier Thursday that Saturday's "routine drill" was conducted within its own waters and added the "flying objects" did not pose any threat to the US, South Korea and Japan.

"North Korea is sending a clear message that it will not be satisfied with humanitarian aid.

"The firing of the intermediate- and long-range missile and the ICBM was not involved in it," a spokesman for the North's delegation for military talks with the South said in a statement carried by the official Korean Central News Agency.

The number of South Koreans visiting the North has slumped this year with inter-Korean ties stalling, figures showed.

All civilian communication between the two countries -- which remain technically at war after the 1950-53 conflict ended with an armistice instead of a peace treaty -- is banned and South Koreans need government approvals to travel north. 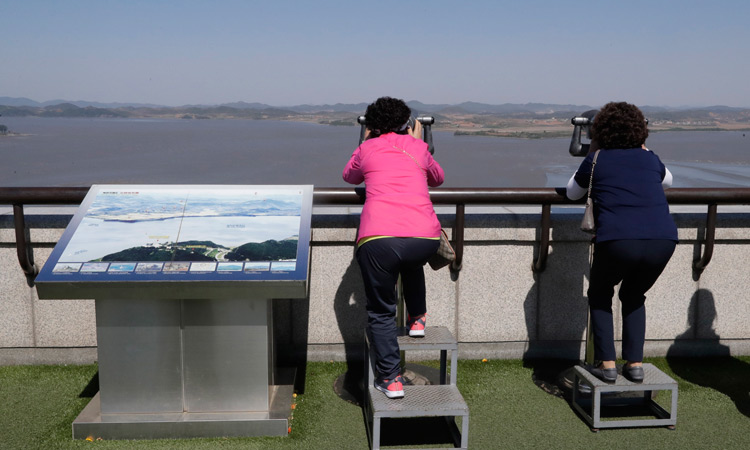 A visitor uses binoculars to see the North Korea side from the unification observatory in Paju, South Korea.

So far this year only 617 have been granted permission, the unification ministry said, little more than the monthly average during 2018, when a total of 6,689 Southern citizens went North to attend government meetings, sports games, cultural and reunions for families separated since the Korean War.

"Due to domestic and foreign political events since the US-North Korea summit in Hanoi, it has decreased somewhat since last year," the ministry said in a statement. 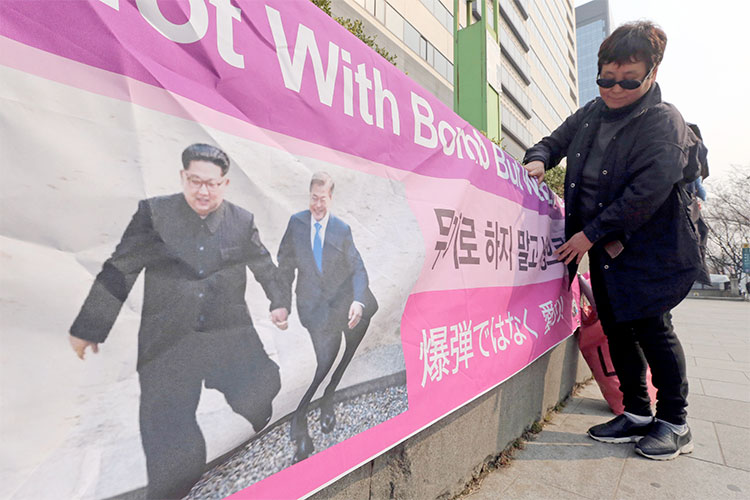