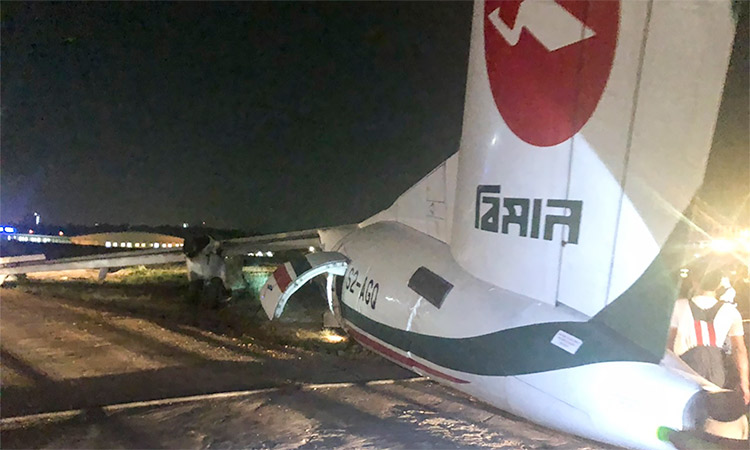 A Biman Bangladesh Airlines plane skidded off the runway when it landed in bad weather at Yangon’s international airport on Wednesday evening, injuring at least 17 people, officials said.

The Bombardier Dash 8 aircraft was carrying 29 passengers and four crew when it bounced while landing during heavy winds in Myanmar’s commercial capital, Bangladesh’s ambassador said. The plane was severely damaged.

“The main reason, the pilot told me, was the weather — crosswinds,” he said, “When he was trying to land... suddenly the aircraft jumped, went up and went down heavily.”

A photo published by the Myanmar Times showed the plane halfway off the runway with its fuselage apparently broken.

The airline flies between Yangon and Bangladesh’s capital Dhaka four days a week.

A spokesman for Myanmar’s Department of Civil Aviation declined to comment, saying the department had not received a report of the incident from the ground.

On the other hand, Bangladesh’s counter-terrorism police have arrested a suspected Daesh member who returned to the country after fighting for the militant group in Syria, police said Wednesday.

Dhaka launched a major crackdown against homegrown extremist outfits following an attack by a local outfit on a cafe in the capital in 2016 that killed 22 people, including 18 foreigners.

He returned to Bangladesh in February and made contact with a new faction of local Daesh-inspired extremist outfit Jamayetul Mujahideen Bangladesh (JMB), blamed for a series of attacks, including the 2016 cafe attack, counter-terrorism official Wahiduzzaman Noor told AFP.

Officers arrested Bepari near a mosque in Dhaka’s Uttara neighbourhood on May 5, and he has been charged under anti-terrorism laws for alleged plans to establish a caliphate in the moderate Muslim-majority country, Noor added.